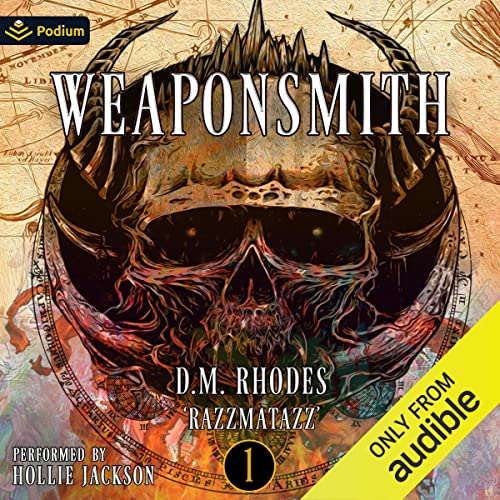 By: D.M. Rhodes,Razzmatazz
Narrated by: Hollie Jackson
Try for £0.00

[I accidentally got engaged to the evil owl-goddess who is obsessed with the number-three and now I have to make weapons for our new adventuring guild].

In an era in which ancient gods live in the world’s cities together with their mortal followers, forming tight-knit guilds and powerful temples, the disfigured ash-caster and blacksmith Hineni has lived his entire life as a reclusive outcast. Hidden away behind layers of clothing and just as many walls and doors, he only ever leaves the house in the dead of night, so that neither the gods or anyone else can ever see him.

However, on one of these night-tide outings, he finds that has gained the unwanted attention of what is seemingly a perfectly normal owl, and through his unwitting efforts at simply filling his nights with acts of personal meaning, he ends up promising himself to a creature that is perhaps even less versed in human ways than he himself is. He is a mysterious, odd owl-goddess that nobody seems to have ever heard of, Obscura.

Hineni, having had no greater purpose in life until now, finds himself willing to accept this turn of events and dedicates himself to creating a brand new adventuring guild, under the watchful eyes of the ancient entity Obscura, who has only one, clear, proclaimed goal—

Weaponsmith is a slice-of-life litRPG [soft romance] with base/guild-building.

What listeners say about Weaponsmith

Good story voiced by Hollie Jackson. characters are well introduced and have interesting personalities. listened to over 3days and enjoyed it greatly.
only gripe is that it suffers from the same thing all converted serial story do, no ending it just trials off with nothing really resolved.

The water made the frogs four

A story of a slowly developing mental health condition with occasional plot points to make them sound less insane, both more and less coherent than the other series by the author.

Narrator sounds like she's trying to read a children's book, no matter what is being said.

honestly can't wait for the next one I was a little weary of it at first but it got way better and obscura cracks me up.