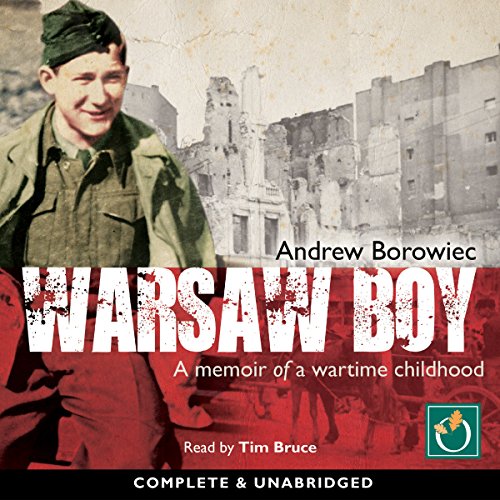 By: Andrew Borowiec
Narrated by: Tim Bruce
Try for £0.00

Poland suffered terribly under the Nazis. By the end of the war, six million had been killed.

On 1 August 1944, Andrew Borowiec, a 15-year-old volunteer in the Resistance, lobbed a grenade from a Warsaw apartment block onto some German soldiers below - he felt he had come of age.

Over that summer Andrew faced danger at every moment. Wounded the day after his 16th birthday, he was captured as he lay in a makeshift cellar hospital. Here he learned a lesson: there were decent Germans as well as bad. This is an extraordinary tale of survival and defiance.

"A subtle, well observered autobiography. Beautifully paced." ( The Times)
"A timely, angry, terribly moving and drily amusing account of an especially dark period in Poland's often tragic history." ( Telegraph)
"In this packed, wise memoir, Borowiec describes a journey that is nothing less than an odyssey through the most harrowing of circumstances. Given the fate of many of his fellow Poles, that there was a happy ending for Borowiec is remarkable." ( The National)
"A story of defiance, bravery and survival. Warsaw Boy is a real-life Boy's Adventure Story - Eat your heart out, Indiana Jones." (Shirley Conran)
"This account of the Warsaw Uprising is both harrowing and full of human and even humorous touches.... The result is an important addition to our understanding of what was happening in Poland during the war years." (Denis MacShane, The Tablet)
"The best-ever account of what is was like to be young and fighting in the Warsaw Rising." (Neal Ascherson Sunday Herald, 'Books of the Year')

What listeners say about Warsaw Boy

really enjoyed this and it was very well narrated with excellent pronunciation of the Polish names and places.

Story about boy growing up and joining resistance.
The story was told very well and had me transfixed on what would happen next.

This book shines a light on things most people wouldn't know about! Truly a great book! Worth a listen.

Seen From The Eyes Of A Non Jew!

This was so well read & to me so interesting. I have read many accounts of what happened to the Jews & have visited the death camps. This is told from the point of view of Non Jew & is exciting because of that!

Also my step-father was Polish & fought during the war. He told us very little, but wore the pain every day of his life.

Poland suffered terribly under the Nazis. By the end of the war, six million had been killed.

We see the story through the eyes of the young Andrew Borowiec. If this is the author's own story, then I would love to meet him & shake his hand!

As a 15-year-old volunteer in the Resistance, he lobbed a grenade from a Warsaw apartment block onto some German soldiers below & felt that he had come of age!

During his fighting, his war injuries & survival, he learnt much about human nature & recognised that there were good Germans as well as the bad & the very bad!

"This is an extraordinary tale of survival and defiance."

loved this harrowing true story as it shows the war in a much different light.

Great book about the tenacity of youth in the worst of situations and places, brilliantly read

the young aren't so fragile after all

This is how a diary or account should be written. An excellent portrayal of life in Poland told with humour and forthrightness. Candid and to the point. A boy who survived sights that ought not to be witnessed by one so young proves the fact that the young aren't so fragile after all. There were some technical issues with the recording but that didn't spoil my overall enjoyment of this excellent book told through the eyes of a boy who grew up in war torn Warsaw.