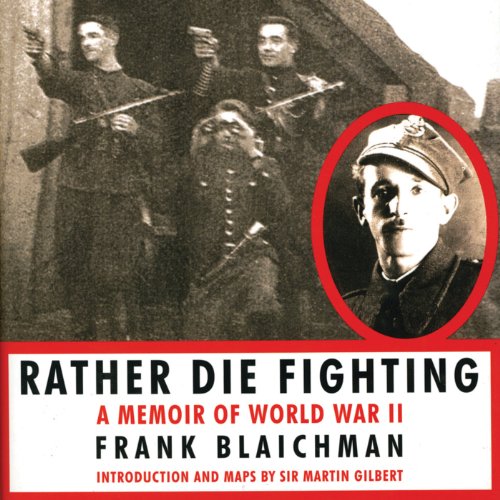 By: Frank Blaichman
Narrated by: Pat Young
Try for £0.00

By age 19, Frank Blaichman had seen most of his friends and family members die at the hands of the Nazis. Rather than hide, Blaichman led a platoon of Jewish resistance fighters in Poland.

Rather Die Fighting is Blaichman’s vividly recollected true story of war and survival. "Skinny Frank" writes about escaping from the Germans, who were resettling Poland’s Jews, and finding his way to a group of Jews hiding in a forest that he organized into a fighting unit. His story also includes acts of daring, like posing as policeman to obtain weapons and refusing to wear the Nazi-imposed Star of David.

In his performance, Pat Young balances the heart-wrenching subject matter of this story with a note of restraint.

“A gripping story of suffering, endurance, and the triumph—against massive odds—of the human spirit.”
—Sir Martin Gilbert, from his Introduction

Frank Blaichman was 16 years old when the war broke out. In 1942, the killings began in Poland. With his family and friends decimated by the roundups, Blaichman decided that he would rather die fighting; he set off for the forest to find the underground bunkers of Jews who had already escaped. Together they formed a partisan force dedicated to fighting the Germans.

This is a harrowing, utterly moving memoir of a young Polish Jew who chose not to go quietly and defied the mighty German war machine during World War II.

What listeners say about Rather Die Fighting

A must read for 2A advocates

A deeply gripping and engaging story on what happens when one side has all the weapons and the other none, and a testament to survival under the harshest conditions imaginable. The narrator does an OK job, but seems to butcher the names of places and people really badly. Highly recommend for anyone studying in the subject of preparedness and survival.

very gripping and enjoyable listen although the story is sad. it was an eye opening listen and made me very grateful for not needing to endure this

a good and insightful listen

the narrator mispronounced hebrew and yiddish words. his accent didnt work welll with the story and ethnicity of the author. it’s annoying that explanations of jewish terms occurred.

An interesting account of an inspirational person whose bravery is astounding. Thought provoking reflection of sheer courage and determination.

I thought this audiobook was an excellent listen. Hearing about the persecution of the Polish Jewish community from a teenaged boy's perspective was a welcome change from how the persecution is usually portrayed.
I highly recommend this book, I know for a fact that I'll definitely listen to this audiobook again, AND it was totally free with my Audible membership as well! Thank you Audible!!

fantastic story about fighting back when death is the only other option. Brave men and women surviving against enormous odds.