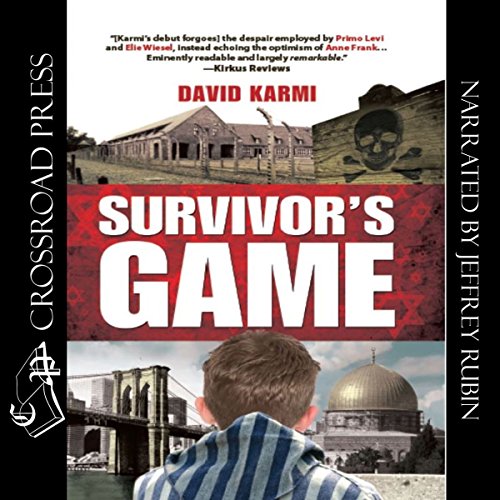 By: David Karmi
Narrated by: Jeffrey Rubin
Try for £0.00

A heart-wrenching true story of one young man's journey into, through, and out of the Holocaust.

Some people have a knack for survival, for getting out of jams. Twelve-year-old David Karmi found himself face to face with the ultimate test. With his homeland consumed by fear, David entered a world of human slaughter. Whole towns were vaporized. Cities obliterated in firestorms. More than 50 million people died - 12 million either gassed, shot, hanged, worked to death, or subjected to biological experiments. David survived.

Separated from his parents and siblings, David Karmi was hurled into a nightmare of death camps, forced marches, sickness, violence, and depravity. On his own, through the tortuous months that followed, he endured. He is a survivor of Auschwitz, Dachau, and the Warsaw Ghetto. He endured forced marches, starvation, and even persecution after the Allies freed him from the camps. This is a story of strength, courage, some luck - and an amazing man, told in his own words. It is the biography of a survivor.

What listeners say about Survivor's Game

Survivor's Game is a biography written by David Karmi. David was a prisoner in three German death camps during the Second World War. Unlike many books written by prisoners during the war, David only spends a small portion dedicated to his experiences in each camp. The remaining narrative focuses on his life before and after the war, which lends a fresh perspective to the realities of Jewish life during this time. This perspective is expertly delivered by Jeffrey Rubin, who narrates this work.

David was born in Romania in 1928. The first chapters are dedicated to his early life as a Jewish boy, attending school, playing with friends, engaging with his parents and sister, overcoming adolescent hardships and moving to Hungary. Much of the narrative in this portion focuses on the values and morals that he lived by, all of which he later used to survive the death camps.

David and his family were eventually captured by the Hungarian police, who released them in a remote area of Romania. After some time struggling to survive and moving across Europe, they are separated and subsequently captured by the Germans. Throughout his captivity, David was led to three camps: the Warsaw ghetto, Auschwitz and Dachau. He was frugal, resourceful and smart. He knew that he needed to work hard and learn quickly if he was to demonstrate his usefulness to his captors. It's these qualities that keep him relatively safe and healthy during the war. He and his camp mates are eventually rescued by the Americans at the end of the war. The latter half of the narrative focuses on his life after the war. His journeys lead him to Palestine, where he fought in the Jewish war for independence and helped rebuild the Nation of Israel.

Survivor's Game is well-written and intriguing. Although, there are some pacing issues with this work. The narrative slows down considerably during the chapters following the war. Fortunately, Jeffrey Rubin keeps every chapter interesting with his superb narration. His inflections and accent expertly mesh with the overall narrative and tone. He adds emotion where necessary, and it never comes across as forced or embellished. And he maintains clear and proper enunciation throughout. He is an excellent narrator who never detracts from this work.

Survivor's Game is an intriguing, emotionally compelling work. Although there are a few issues with pacing, this is still a captivating look into periods of 19th century history that are oftentimes overlooked. It's highly recommend to anyone interested in history or Jewish culture.