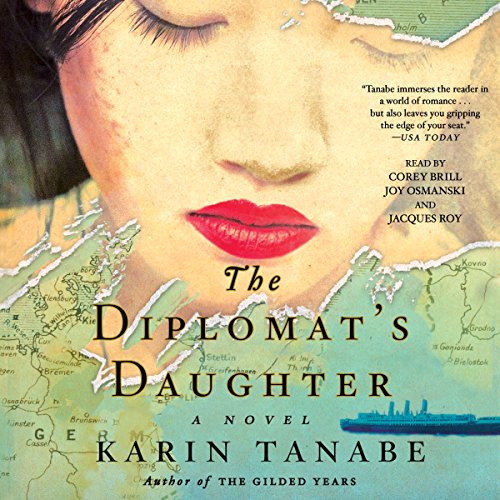 For fans of All the Light We Cannot See and Orphan Train, the author of the "thought-provoking" (Library Journal) and "must-read" (PopSugar) novel The Gilded Years crafts a captivating tale of three young people divided by the horrors of World War II and their journey back to one another.

During the turbulent months following the 1941 bombing of Pearl Harbor, 21-year-old Emi Kato, the daughter of a Japanese diplomat, is locked behind barbed wire in a Texas internment camp. She feels hopeless until she meets handsome young Christian Lange, whose German-born parents were wrongfully arrested for un-American activities. Together they live as prisoners with thousands of other German and Japanese families but discover that love can bloom in even the bleakest circumstances.

When Emi and her mother are abruptly sent back to Japan, Christian enlists in the United States Army, with his sights set on the Pacific front - and, he hopes, a reunion with Emi, unaware that her first love, Leo Hartmann, the son of wealthy of Austrian parents and now a Jewish refugee in Shanghai, may still have her heart.

Fearful of bombings in Tokyo, Emi's parents send her to a remote resort town in the mountains, where many in the foreign community have fled. Cut off from her family, struggling with growing depression and hunger, Emi repeatedly risks her life to help keep her community safe - all while wondering if the two men she loves are still alive.

As Christian Lange struggles to adapt to life as a soldier, his unit pushes its way from the South Pacific to Okinawa, where one of the bloodiest battles of World War II awaits them. Meanwhile, in Japanese-occupied Shanghai, as Leo fights to survive the squalor of the Jewish ghetto, a surprise confrontation with a Nazi officer threatens his life. For both men, Emi Kato is never far from their minds.

Flung together by war, passion, and extraordinary acts of selflessness, the paths of these three remarkable young people will collide as the fighting on the Pacific front crescendos. With her "elegant and extremely gratifying" (USA Today) storytelling, Karin Tanabe paints a stunning portrait of a turning point in history.

What listeners say about The Diplomat's Daughter

I’ve listened to every modern WWII historical fiction book I can find. There are only two I will not forget. All the Light We Cannot See and the Diplomat’Daughter.

I can easily picture this as a movie. Certainly there would be interest to WWII fiction aficionados due to the rarely told part of the Japanese experience.

Lovely coming of age story of Emi Kato, daughter of a Japanese diplomat who has lived in the West until the war sends her home to Japan, a home she hardly knows.

Scratches the surface of love and war, but...

This book seems to scratch the surface of love and war, but never really elicited any real emotion. I personally didn’t feel any real depth in this book. There wasn’t anything that really made me think deeper about such an important time in history. It’s definitely more of a love story than a historical one. I really wanted more insight on Japan and the internment camps, but everything felt really rushed and glossed over. Also, the narrator that did Leo’s character was literally emotionless. In scenes that required screaming or panic or anger, they instead were almost done at a whisper. The narrator’s energy never changed regardless of what was happening! This may have played into my lack of connection to the book. I don’t know. All together though I felt the story was just lacking.

A deep understanding of what the Japanese, and Americans went thru during world war II on a personal level. Very well written, keeps you coming back for more. I will read more from this author.

It is not the best book, but it is captivating to be caught up in the lives of three different young adults so devastatingly caught up in a war that has no way of having a happy ending due to the stupid egos and bad decisions of politicians and War hungry lunatics.

THE DIPLOMAT'S DAUGHTER: I just re-read some of the reviews on Goodreads and have to wonder how anybody could rate this anything other than five stars. Yet they have, which makes me wonder about THEM and not this amazing story. I do not think the wars were trivialized as one reviewer said. I have no idea if it is historically accurate down to the nitty gritty, but close enough to my mind. Excellent "listen" and the narration was superb.

I listen to a lot of WWII fiction and I appreciate varied points of view and settings which this novel provides. And I think the story was strong. I thought the geographical and social traction the Japanese diplomat afforded his family was clever as it offered up believable scenarios and glimpses of many WWII circumstances and location issues. But the novel was renenered less impressive by the weak narration. None of the narrators impressed me nor ever became the characters they played. Their voices were monotone. Joy Osmanski, whom I've enjoyed in the past (The Tea Girl of Hummingbird Lane), didn't do the British or Austrailian accents well and so they lost credibility for me. And Corey Brill and Jacques Roy have the terrible habit of not eliminating the salavia they collect when speaking so that one is constantly hearing it in thier prouncination *cringe* Overall, I wish I would have read the text instead. I'm sure it would have been more intriguing and enjoyable, thus my reveiw of the story itself more favorable.

This story takes us through the perspectives of three characters during WWII. The first one is a Japanese born woman who has lived and traveled around the world due to her father being a diplomat. Her name is Emi Kato. She is in love with Leo and is so sad to be leaving him, as he is from Austria, a place she had lived in for a time. In the early part of the book we don't really know much about him other than her obsession. As the story goes on we learn much more about his life (more in the second half). The second character we learn a lot about is Christian, who is an American born to German parents. He struggles with life in an internment camp.

This story is filled with passion and love as well as the hatred of people who are of different races. It is also about how a heart can change and how other hearts can have persistence and patience. It is a sad story many times and is not meant for those who are minors. It was well written. The narration on the audio book is well done. I am glad they changed voices based on the narration.

Enthralling and with untold historical context…

I’m an avid WW2 historical fiction carnivore. The bravery of that generation (I’m 48) astonishes me and pulls me to them via historical renditions of their life stories. It is RARE that I’m fully involved in a story like I was with the “Diplomat’s Daughter”. One of the downfalls of being a carnivore of this genre is that one can read the majority of the best out there and then figit around with 3 star books to satisfy the hunger. So my delight was profound when I realized, by chapter two, that this was going to be a mentally encompassing listen. That I would hear a viewpoint rarely written about was a relief to me. I recommend this book wholeheartedly. The only reason it’s 4 stars and not 5 is Jack’s language. Explicit language, even though he’s a soldier, adds nothing to a character’s development and keeps the book from being recommended to certain ages. I am not offended by common foul language but Jack’s given language was far beyond common. Regardless, I will live with this story in my mind for many weeks and then listen again. I can count on one hand how many of my 600+ audible books I’ve listened to more than once. I happily give the “Diplomat’s Daughter” a finger on my hand. (Note: Listen at 1.1 or 1.2 speed … the narrators are even better there)

why did it end that way?

It was a great story but the ending made me very mad can we get a part 2 please!

This is my 3rd Tanabe book and my favorite

3 different narrators helped the reader understand whose perspective was being shared. Great idea to help the story to be seemless!