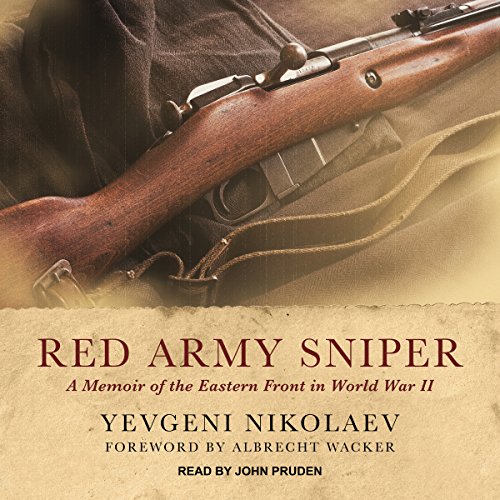 Yevgeni Nikolaev was one of Russia's leading snipers in World War II, and his memoir provides an unparalleled account of front-line action in crucial theaters of war. Nikolaev is credited with a remarkable 324 kills, and his wartime service included time in the siege of Leningrad in 1941/1942.

His memoir is not a neutral, apolitical account - far from it. Nikolaev asserts, for example, that Finland attacked Russia. As a member of the NKVD, it is not surprising that his memoir is full of historical misinterpretation and justification of the agency's actions.

In vivid, arresting recollections he paints his actions in a saintly, heroic light. He describes the comfort of the German foxholes, wired with telephone connections, relative to the Russians who fasted without food or water, awaiting the moment for a perfect shot. He claims the Russian soldier was a moral warrior, killing only with head or heart shots.

In addition to describing details of his kills, Nikolaev explains how his life was saved when an explosive rifle bullet struck a watch that he kept in his jacket pocket. His life was saved by a surgeon who extracted all the watch parts.

I really enjoyed reading this book. I'm just kinda sad it didn't go all the way to Berlin. This book is mainly about a sniper during the siege of Leningrad. He ranks up 324 kills, fulfilling a promise he makes at 1 point during the book. It was a truly gripping book though. Just be warned that most of his motivation is politically based. I respect these guy tough, he was a tough chap and would do anything for his country. You can't ask more of a soldier than that.