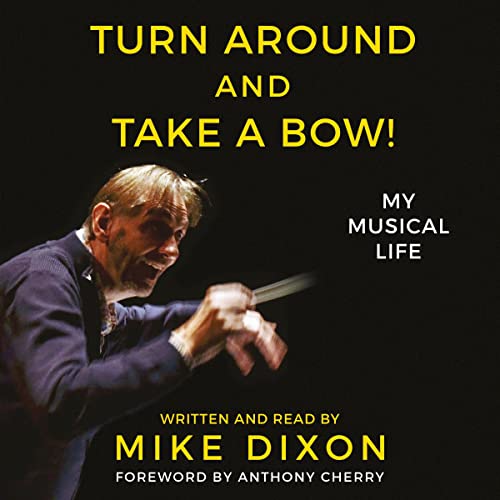 Turn Around and Take a Bow!

Mike Dixon has been involved in the British music industry for over 40 years and has been a musical director for more than 20 West End productions, including We Will Rock You, The Bodyguard, Grease, Aspects of Love, Joseph and the Amazing Technicolor Dreamcoat, and Jesus Christ Superstar. His TV credits include six Royal Variety Performances, countless light entertainment series, and Glastonbury with Shirley Bassey, as well as a huge number of high-profile television and radio concerts.

His career has taken him all over the world, working with some of the most iconic artists of the 20th and 21st centuries, including Dame Shirley Bassey, Lord Lloyd-Webber, Leslie Bricusse, Sir Tim Rice, Don Black, Sir Elton John, Lionel Richie, Sir Tom Jones, Lady Gaga, and Queen.

The book follows his journey as his exciting and eclectic musical career develops. From his early musical experiences in Plymouth, studying at Trinity College of Music, to conducting in the Royal Albert Hall, with plenty of humor along the way, it is a little peek behind the scenes into the world of entertainment from a unique, hands-on perspective.

Turn Around and Take a Bow! My Musical Life - Written and read by Mike Dixon

Edited and Produced by Richard Heathcote

Turn Around and Take a Bow! Theme (Opening and End Slate) - Written and performed by Mike Dixon

What listeners say about Turn Around and Take a Bow!

A genuine “must listen” for all musicians, and all those who love musical theatre

What a fantastic, fascinating book! Ok so as a musician, songwriter AND musical theatre fan I am clearly biased BUT I loved every minute of this book! I do not know Mike and had never even HEARD of him until a friend (a fellow drummer) recommended this book! It turns out I have physically been in the same room (or theatre) with Mike Dixon and his various musical projects on many occasions, and seen him on TV many times without even knowing who he was UNTIL now! I really adore how Mike is so genuinely appreciative of all the great musicians and acts (and actors) he has worked with, holding THEM in such high esteem! If every amazing person he mentions buys a copy he is guaranteed a best seller! :-) Bravo Mike I hope we meet one day, both you and your book are amazing!

I’ve known Mike for most of my career and have been lucky to have worked with him on a couple of the projects mentioned in this warm, charming and informative autobiography. For connoisseurs of music and musical theatre and also anyone who has been under Mike’s experienced baton, this is a book to relish.