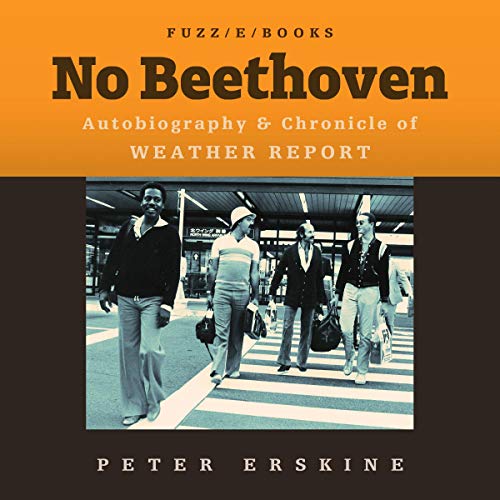 No Beethoven chronicles the life and times of drummer Peter Erskine, with the legendary band Weather Report being the nexus to this firsthand account.

Erskine was in the midst of the modern American jazz music scene as it underwent its most dynamic change. Peter Erskine is a musician of his times with incredibly rich stories to tell in this autobiography.

No Beethoven includes chapters dedicated to Weather Report and the musicians Joe Zawinul, Jaco Pastorius, and Wayne Shorter, plus the bands Steps Ahead, Steely Dan, and artists such as Elvin Jones, Joni Mitchell, Freddie Hubbard, Diana Krall, Steve Gadd, producer Manfred Eicher, composers John Williams and Mark-Anthony Turnage, et al. The audiobook provides a revealing look at the creative process involved in performing music onstage and in the recording studio, as well as a behind-the-scenes look at how the musical-instrument industry operates.

This is an audiobook for all musicians and fans of music. As famed drummer and Rush founder Neil Peart writes: "No Beethoven is among the best musical autobiographies I have read. Peter's story is absorbing and compelling, full of well-drawn characters and incidents both humorous and serious. It flows with the same ease and naturalness as his drumming, and under that good-humored gloss, it conveys the same profundity of experience and ideas. This book should be read not only by every drummer, but by every musician. Even dedicated amateurs of music will find it entertaining and worthwhile."

Special bonus: This audiobook features 11 bonus music tracks - more than an hour - of Peter with some "very special friends".

"Like the excellent drummer that he is, he approaches this book by keeping a steady beat throughout. Like his solos, the chapters are concise and to the point, changing patterns and dynamics as needed. He uses his brushes deftly as he goes through his reflections on relationships and family, riding the cymbal on his early days with Stan Kenton and Maynard Ferguson. He hits the snare hard and keeps at it on his insights on Joe Zawinul, Jaco Pastorius while the sizzling high hat of his days with the iconic fusion band fade in and out during various parts of the book, never quite leaving the relentless pulse." (Jazz Weekly)

"This is a story necessarily made up of creative personalities and Erskine's experience with them. Stan Kenton, Joni Mitchell, Michael Brecker, Wayne Shorter, Elvin Jones are all revealed in startling detail with love and respect. Spread out over the book is the evolution of Erskine's beautiful family within the perspective of his life as an in-demand musician. This is the biography of a success story with little of the dissolution and loss characterizing so many such accounts." (All About Jazz)

"Fortunately for us, Erskine’s memory is sharp, and his breezy, brazenly honest 320-page memoir is filled with juicy stories, humor, gratitude, and wisdom that will appeal to aspiring professionals and veterans alike." (Bass Player Magazine)

What listeners say about No Beethoven

Too much meandering, not enough about Weather Report, boring narration, not what I expected

Great Stories of a Life in Music

Peter Erskine gives us some insight into the life of a top-level jazz/fusion musician. His narrative skills are exceptional, especially his impressions of his fellow musicians. This book was a real pleasure to listen to.

A short pdf supplement would have been appreciated, as at one point, he mentions a photograph, so I assume there we some pictures in the print edition. Also, I would love to know the details of the 11 bonus music tracks (titles, personnel, etc.)