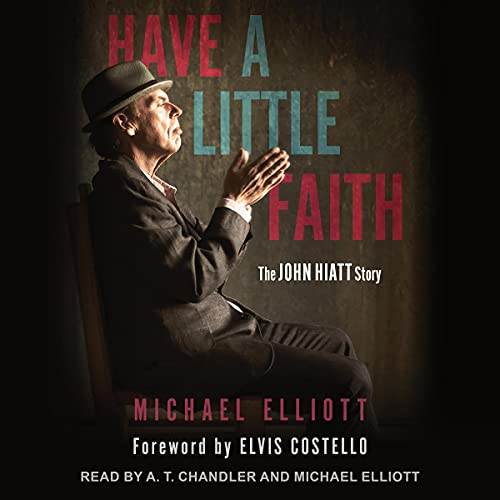 Have a Little Faith

"You already know John Hiatt is one of our best songwriters, but what you might not know is his life is as great a story as his songs.... I thought I knew my John Hiatt, but I learned a lot." (David Menconi, author of Step It Up and Go)

By the mid-1980s, singer-songwriter John Hiatt had been dropped from three record labels, burned through two marriages, and had fallen deep into substance abuse.

It took a stint in rehab and a new marriage to inspire him, a producer, and an A&R man to have a little faith. By February 1987, he was back in the studio on a shoestring budget with a hand-picked supergroup consisting of Ry Cooder on guitar, Nick Lowe on bass, and Jim Keltner on drums, recording what would become his masterpiece, Bring the Family.

Based on author Michael Elliott's multiple extensive and deeply personal interviews with Hiatt as well as his collaborators and contemporaries, including Rosanne Cash, Bonnie Raitt, Ry Cooder, and many others, Have a Little Faith is the journey through the musical landscape of the 1960s through today that places Hiatt's long career in context with the glossy pop, college-alternative, mainstream country, and heartland rock of the last half-century.

What listeners say about Have a Little Faith

I learned a lot I did not know. I’ve been a fan since bring the family. Thank you John Hiatt love you

A Legendary Story For A Legend

John Hiatt. A hero of mine. Listening to his story was a real treat. The reader was amazing, too. Great book!

if you're a fan of great songwriting, let alone John Hiatt himself, you've got to read this book. I loved it.

I love John Hiatt and this was very enlightening as to the man behind the music. However, too many times in this book, the writer shares his deep knowledge of the industry and goes down tangents that left me wondering why. The tangents become distracting because I found myself more interested in driving than listening. That's the opposite effect an audio book should have. I think only a hard core fan will enjoy this book. The best thing about it is I learned the real biography of John Hiatt is in his songs. This book simply served as the key to unlock that understanding.

A Book Of Great Depth

A fascinating journey through the life and music of John Hiatt as told by his contemporaries, the author, and John Hiatt himself. Worth a second listen.