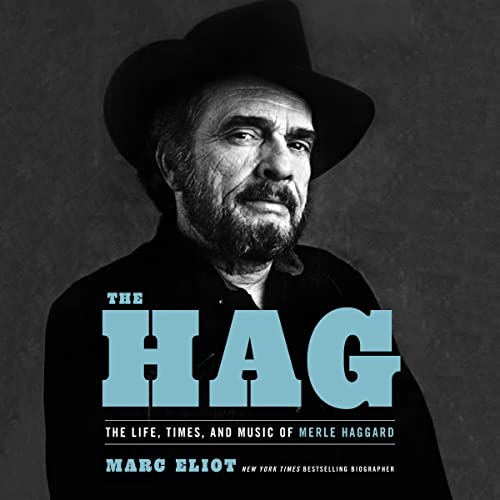 Merle Haggard was one of the most important country music musicians who ever lived. His astonishing musical career stretched across the second half of the 20th century and into the first two decades of the next, during which he released an extraordinary 63 albums, 38 that made it on to Billboard's Country Top 10, 13 that went to number one, and 37 number one hit singles. With his ample songbook, unique singing voice, and brilliant phrasing that illuminated his uncompromising commitment to individual freedom, cut with the monkey of personal despair on his back and a chip the size of Monument Valley on his shoulder, Merle's music and his extraordinary charisma helped change the look, the sound, and the fury of American music.

The Hag tells, without compromise, the extraordinary life of Merle Haggard, augmented by the deep secondary research, sharp detail, and ample anecdotal material that biographer Marc Eliot is known for, and enriched and deepened by more than 100 new and far-ranging interviews. It explores the uniquely American life of an angry rebellious boy from the wrong side of the tracks bound for a life of crime and a permanent home in a penitentiary, who found redemption through the music of "the common man".

Merle Haggard's story is a great American saga of a man who lifted himself out of poverty, oppression, loss, and wanderlust to catapult himself into the pantheon of American artists admired around the world. Eliot has interviewed more than 100 people who knew Haggard, worked with him, were influenced by him, loved him, or hated him. The book celebrates the accomplishments and explore the singer's infamous dark side: the self-created turmoil that expressed itself through drugs, women, booze, and betrayal. The Hag offers a richly anecdotal narrative that will elevate the life and work of Merle Haggard to where both properly belong, in the pantheon of American music and letters.

The Hag is the definitive account of this unique American original and will speak to fans of country music and rock biographies alike.

What listeners say about The Hag

Well researched and written bio of a complex man

By modern celeb standards Merle would have been cancelled before he even picked up his guitar. Loved this bio. Great anecdotes and very moving. One thing, Marc, no more British accents please! 😀

When Van Halen requested “no brown M&Ms" on their backstage rider, it wasn't a joke or entitlement. They also had very specific requests on their TECH RIDER concerning sound reinforcement, stage lighting rig safety, etc. So brown M&Ms in the dressing room meant send the road manager to check on their other, more pressing technical needs that might also have been neglected or FUBAR-ed.
Similarly, every time author (and Eagles superfan) Marc Eliot repeatedly and embarrassingly refers to the instrument as “steel pedal” instead of the correct PEDAL STEEL, I wonder what else he got wrong. Additionally, his weird, affected and condescending neo-folksy “Hill-bonic” writing style adopted for this subject certainly doesn’t convince me he’s got a good grip on Country & Western music or it’s culture.
Sadly, "...you don't have very far to go" to find out. I started to keep a list of all the obvious errors and missteps but gave up fairly quickly, but here are highlights: There is no E.C. Draft High…Bob Wills NOT Tommy Duncan did the AHA!’s…it’s Buddy Holly and the CRICKETS not “Critics”…and Gram Parsons didn’t go about in “dirty jeans,” he was an image-conscious clothes horse who often wore custom Nudie outfits on an everyday basis (with the trust fund to afford it).
Biographer’s Commandment 1: KNOW THY SUBJECTS BEFORE YOU WRITE ABOUT THEM.
All that said, to quote reviewer Fred Campbell, overall it's not a bad read in that it’s revealing about dates, people and places, but falls quite short when it comes to revealing much about Merle himself, citing as an example the author's inexplicable disregard for Haggard's SERVING 190 PROOF album and the opening track,"Footlights,” which Haggard described as a song about what it felt like to perform minutes after learning his idol Lefty Frizzell had died (a life episode Eliot even describes in the book!). It is as personal and revealing as anything Haggard ever recorded, but the album is ignored and the song is quickly dismissed.
And in the What Were They Thinking department, choosing author Marc Eliot to narrate the Audio version was a mistake of EPIC proportions. His halting, poorly articulated, mispronounced and at times unintentionally comic deadpan delivery reminds me of a speech therapy session and his insulting, faux-“hillbilly” accented impressions of Buck Owens and other interview subjects are beyond absurd sounding more like cartoon character Snuffy Smith with a mouth full of industrial ball bearings. Leave that stuff to professional voice actors. Please.
The publishers describe this as "definitive”…I describe it as a “misfire”.
Merle Haggard is one of the most important American artists and poets of the 20th century, regularly mentioned in the same company with Bob Dylan, Robert Frost, etc., and as such deserves a much better biography than this weird mess, not to mention a better produced-audio book!
SUCH a disappointment...can I have my credits back?

The story is good but the narrator's halting cadence is like listening to Captain Kirk for 12 hours. I had to put it on double speed to get through it. He literally pauses a second every three words...

the book was great

I loved the book. I had no idea half of the struggles Merle went through. I did not like the way Marc would alter his voice for different peoples recollections. He made men sound like women and women like uneducated loosers. would have been better just to read the whole book in his own voice!

I love knowing about Merle Haggard but can’t stand listening to this guy’s voice. Does not hold my interest at all. Rather just read the book.

Learned alot about the Hag in this book. Interesting story about this great musician

This was a wonderful book. The only negative I have to offer is the narrator wasn’t that good in my opinion.

Very good, worthwhile, but could have been better

Overall, I love this book. However, there were a few things that detracted from this being a slam dunk five star review. First, the author, while obviously a very talented writer, should not be an audiobook narrator. His ridiculous impersonations of various characters in the story (Buck Owens, for example) bordered on insulting. This and his mediocre narration detracted from what could’ve been one of the best audiobooks I ever read.

Also, the author got a few facts wrong about songs, etc. I’ve been a long time classic country fan. I grew up with the stuff and I know if I caught some errors they’re probably other ones lurking. Of course, every book has some errors in it. Nobody is perfect regarding any subject but I found it irritating. That being said, for the true Haggard fan, I would absolutely recommend this. It was very good material and very compellingly told (writing not narration). I was both surprised and touched by the author’s comments about his own fandom of Merle Haggard in his notes section.

Greatest book about the Greatest Musician to ever walk the earth!!!

Well done all the way around. You get a behind the scenes peak at the legend from some of his closest friends and fam. Was truly as unbelievable as the HAG himself!!! Def for the Hag faithful, Thank you

This fella did a great job researching Merle Haggard. I enjoyed the information but geez, the narration is awful! Still worth a listen and it does supply comic relief at time with the voice impersonating. Some of the writing is elementary, like “the trip was a rough one and I don’t mean just the road..” but still, great info and insight into the Hag! Loved it.