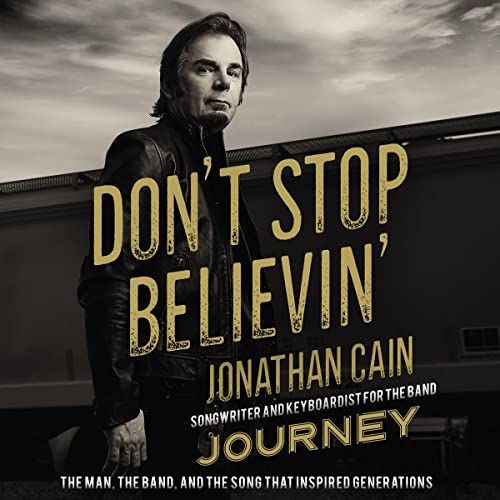 Keyboardist and songwriter with the band Journey, Jonathan Cain writes this long-awaited memoir about his personal story of overcoming and faith, his career with one of the most successful musical groups in history, and the stories behind his greatest hits including "Don't Stop Believin'."

When Jonathan Cain and the iconic band Journey were inducted into the Rock and Roll Hall of Fame, Cain could say he had finally arrived. But Cain's journey wasn't always easy - and his true arrival in life had more to do with faith than fame.

As a child, Cain survived a horrific school fire that killed nearly 100 of his classmates. His experience formed a resilience that would carry him through both tragedy and success. Moving from Chicago to Sunset Boulevard, Cain never let go of his dreams, eventually getting his big break with Journey- and writing the songs that would become the soundtrack of a generation.

Don't Stop Believin' is an epic story of one man's dream that takes you from playing old-country songs at an Italian Deli in Chicago and his experiences with a warm, encouraging father who died too soon, to suddenly writing mega-bestselling songs with some of the most talented musicians and performers ever to take the stage of some of the world's largest arenas. He tells of the thrilling moments when the music came together and offers an inside look at why Steve Perry left and the extraordinary story of their gifted new vocalist, Arnel Pineda.

Through a wonderful retrospective of music that takes us right to the present, Jonathan Cain reminds us of the melodies and lyrics that serve as milestones for our biggest dreams as they call us to never stop believing.

Way too thick on religion.

I was excited to hear the story after listening to Cain on Eddie Trunk's show. I generally enjoy rockstar bios and band memoirs. The Don't Stop Believing documentary was excellent! Cain's Role as a mentor to Arnel was heartwarming. However, in this book, Cain really lays the religion on thick. I'm happy he has his faith. I just didn't expect it to be the core of his entire story and to dominate the entire book. I believe this title should be classified under Christian reading.

I like the way the author included cuts from his newest release, but honestly, I didn't really care for the music. It was like Michael W Smith music with Tony Roberts Jesus fanboy lyrics.

I Believe Cain is a excellent author and songwriter. He also expertly reads his book. I appreciate when an author reads their own audiobook.

I hope others enjoyed this book more than I did.

Not the Journey story your looking for

13 chapters and then you get to middle school..a few more then high school.(yawn)...chapter 20 or so gets you to Journey..

Beautifully written. A full image of the Journey.

When I saw Jonathan Cain on Fox and heard he had written a book it really peaked my interest to seek his book out on audible. I was not disappointed. In one day of listening, Jonathan told his story, through his story I was able to understand the gift he was given as a song writer. This is a much needed biography of not only Jonathan's life but also a complete picture of Journey's road. Enjoy and savor the array of emotions and memories a talented story teller- songwriter can take you. Well done!

This is an awesome book about the band Journey; however, this book does not stop there. Don’t Stop Believing is a life story about faith, family, failure and forgiveness. I am a 60 year old longtime Journey and Steve Perry fan. I have now become a huge fan of Mr. Cain. The way he tells his story is real and honest. He talks about his mistakes with honesty and humbleness that is very refreshing. His book can be summed up in 2 words Grace and Hope. I am more excited than ever to head back to see Journey when they return again to Birmingham, Al. this year. After hearing this book I will hear them in a whole new way.

Not the journey I was hoping to hear more about...

The author spends a lot of time on his early life and superstition, and doesn't get to Journey until ~Chapter 18! Now that the book got to "the good stuff" I ran out of motivation to continue. Maybe (probably) I'll finish it later, but I need a break after all that setup.

If you are looking on a comprehensive insider's view of the turmoil and goings-on from the inner circle of Journey, this might not be the book for you.

Listened to this in less than 2 days, and am thankful Jon wrote and voiced his memories.
Dads are vital - I recall my own praying at his bedside.
I'm his age and lived many of the same seasons. I too have often felt God's caring hand in my 68 years, and now feel permission to recall, relive, and live out many of my memories which were capped off, and left sleeping.
This work spoke to me. Showed the value of saying thank you, and you are welcome, and you are forgiven, and you will always be loved by Your Father.
Thanks Jon - hope I can call you that...

Words with songs and bonus chapters

What a great story about a life long “journey” with a person who loves music and the music industry. A must read for any singer/songwriter wanting a successful career in the industry.

Jonathan speaks well, but the story is quite thin. using music for effect really anoys me. something good but overall dissapiointing.

Let me begin by stating that Jonathan Cain is a brilliant musician and songwriter. He is likely one of the finest and most successful artists of our era. Sadly, this audiobook is so bad it pains me to write this review. As a marathon runner, I've listened to thousands of hours of books, none as bizarre as this one. The author literally cries multiple times during the narration, which is streamed over a flowery musical track. I can understand the emotion when he discussed a fire that took the lives of children in his school, but this behavior streams throughout the book. As a Journey fan, I was really hoping for some insight on the inner workings of the band, songwriting, etc. but this book is mainly about Mr. Cain, his childhood, life and marriages streamed over a moody soundtrack with a healthy share of Jesus, God and religion. It's a hot mess, if I can be honest. I think Mr. Cain deserves a better edit and venue to tell his impressive story.

Enjoyed the Story, Not the Narration

Jonathan is a great songwriter, a good singer, and a horrible reader.

That said, I tend to buy books that are read by the writers. And I am glad that Jonathan read his own book. But he seriously does not have a good feel for grammar, inflection, ends of lines versus ends of sentences, etc. But again, I enjoyed the information and minutely enjoyed the music in between the chapters.