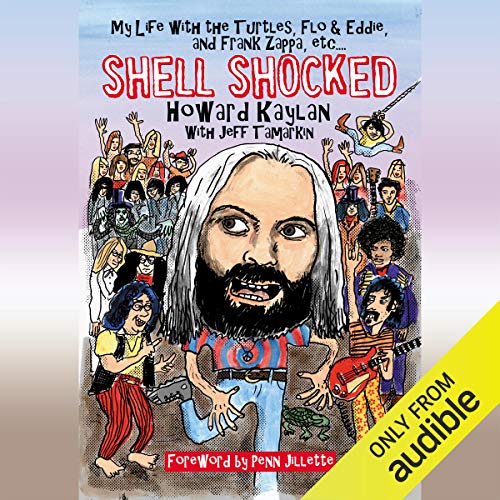 If Howard Kaylan had sung only one song, the Turtles' 1967 No. 1 smash hit "Happy Together," his place in rock-and-roll history would still be secure. But that recording, named in 1999 by BMI as one of the top 50 songs of the 20th century, with over five million radio plays, is only the tip of a rather eye-opening iceberg. For nearly five decades, Howard Kaylan has been a player in the rock-and-roll revolution. In addition to his years with the Turtles, Kaylan was a core member of Frank Zappa's Mothers of Invention and the dynamic duo Flo & Eddie, and part of glam rock history with Marc Bolan and T. Rex.

He's also given street cred and harmonies to everyone from John Lennon, Bruce Springsteen and Alice Cooper to the Ramones and Duran Duran, to name just a few. Howard Kaylan's life has been a dangerous ride that he is only too happy to report on, naming names and shedding shocking tales of sex, drugs and creative excess. Shell Shocked will stand alone as not only one of the best-told music-biz memoirs, but one with a truly candid and unmatchable story of rock-and-roll insanity and success from a man who glories in it all.

What listeners say about Shell Shocked

Be careful on the road

I almost had to pull over to the side of the road whilst driving back from Bath from Oxford I was laughing so much. I loved this book. My wife and daughters found it offensive. You can’t get a better recommendation than that!

Amazing tales from the road from the Mother Turtle

I first became aware of Howard Kaylan through his hilarious performances on some of the Zappa / Mothers albums from the early 70's. I love listening to Just Another Band from LA and Mothers Filmore East June 1971 albums. It was from here that I realised that he and Mark Volman were from the legendary 1960's band The Turtles. Of course I had heard Happy Together, it is an all time classic but I hadn't explored many other of their records or Volman / Kaylan's subsequent work as Flo and Eddie. Howard is, of course, a very funny guy. He has a natural wit and is a great raconteur. And WOW what stories he has to tell. From the early days to meeting Hendrix and Brian Jones in London in the 60s to performing with Zappa and, I didn't know this until hearing this, as background singer on many of Marc Bolan / T Rex hits in the 1970s, performing, meeting the Beatles, Bowie and Dylan and then recording and playing with Bruce Springsteen. This guy has done it all. And he doesn't hold back in telling his story with all the highs (sic) and lows of his career. Many musicians have attempted to chronicle sex drugs and rock and roll but I can recall no one has ever been an candid and honest as Howard. I didn't know that Flo and Eddie has hosted a successful radio show for years either and this goes some way to explain why Howard is such a natural behind the mike. It felt more like he was reciting these stories from memory. I thoroughly enjoyed this and did not want it to end.

Excess, it’s the name of the game

What a life. Touchingly and honestly told.
A must for all Music Fans.

I rarely give an unqualified 5 star rating...wait, I NEVER give a 5 star rating, but this audiobook rocks! Baby boomers know the Turtles as an iconic MOR pop band that ruled the pop charts in the late '60s (They knocked the Beatles out of the #1 position at one point) and then had a stereotypical breakup due to the usual: musical differences, drugs, changing public preferences, management, etc. It's all told here by Howard Kaylan (with a "Y"!) in an honest and very funny autobiography that grabs you from the first sentence and never lets up.

With a refreshing lack of ego, Mr. Kaylan dishes the whole storyline of the Turtles to the Mothers of Invention to Flo & Eddie and beyond. Be forewarned: YOU WILL LAUGH OUT LOUD so pick your listening times carefully. I often listen in bed before going to sleep but I couldn't do that with this book - I kept waking up my slumbering spouse with my chuckles and laughter. I also had to avoid many concerned looks in the Doctor's office, on public transportation, in the grocery store...you get the idea.

This production shines throughout. Mr. Kaylan provides a perfect wedding of writing and narration. Even my pet peeve about mispronunciation is absent here - a first in 13 years.

If you have the slightest interest in The Turtles, the '60s and '70s or pop music in general you will love this book.

You CAN'T MISS this one!

I loved The Turtles music growing up in the late 60’s, so I jumped on this audiobook as soon as I saw it and wasn’t disappointed. Howard’s narration is like hanging out with an old friend and swapping rock and roll war stories. The stories of his interactions with rock and roll royalty are worth the price of admission alone. The stories of his personal misbehavior and of the show biz sharks that bit them are riveting. Then there are the Mothers of Invention stories, most notably his firsthand account of the concert in Montreux that was the inspiration for Deep Purple’s immortal Smoke On The Water. All in all a pleasant listen…, that I’ll probably do again in the near future. So if you’re a former child of the sixties, or just love that music, this book is for you.

If you think having Howard Kaylan sing to you is fun, wait till he reads to you...one of the most incredible personalities in music tells his story with the same exuberance as he lived it, with all the 'warts, stars and ex-wives' included...one of the best current autobiographies available

If you loved Frank Zappa,Flo and Eddie this rocks

the Turtles story Rocks it.And FZ and. The smoke on the water story makes this book worth a listen.HK tells of Groupies ,drugs,Zappa and everything about the Turtles and 70 and 71 Mothers .

I feel like I want to hang out with Howard and listen to him tell stories.

First of all I really Love Howard Kaylan’s voice and his narrative made me feel like we were new friends and he was telling me all his wild stories over a drink or two. Very interesting insight on the behind the scenes of the psychedelic 60’s and 70’s.
Great story telling and made me laugh out loud a few times.

Perfectly Recorded and performed. All music fans from Metalheads to, “Trap-music,” zombies best know this stuff.

I love this man's honesty! He possibly, may have lived the most artistic, rock 'n' roll life ever! Her and Mark Volman sang on some of my favorite songs and albums. Dabbled in so many artistic ventures, and scraped by, willing to try almost anything. Just when you think he's out of luck, his luck doesn't run out! He proves that an overweight, less than typically handsome gent can out kick his coverage with beautiful women an improbable number of times! His Zappa & Bolan relationships touched me deeply because they both seemed like impenetrable enigmas who weren't friends with that many people. And their talents, while not at all alike, were impressive. When he recalls their deaths, I felt like I was eavesdropping on something way too personal, and I didn't deserve to hear his personal feelings, they were that raw.

He made many missteps and hurt a number of people, but strip that away (if he'd stayed single, much less emotional shrapnel happens.) This man lived (lives) life to its fullest. An example (of sorts) to follow for his rabid, tenacious inability to say "uncle" when life puts the squeeze on him. Listen to this book and find a new admiration for the author and The Turtles. As well as an equal dislike for the music biz and it's toadies. (So many scumbags)

Lastly, he's got big brass balls. He and Mark Volman sued De La Soul (and rightly so) for sampling their music and not paying them.) The press labeled them as heartless, and trying to suppress "urban" music. When in fact, rap groups were sampling entire melodies that were copyrighted! They took a lot of shit for it, but they won, because they were right! Theft is theft.

This was so much fun to listen to. I could not wait to finish it and was sad when it ended. (Much like his many marriages)

Do it now. You won't regret it!

A down to earth legend that kept journals!

A true legend that despite the ups and downs of show biz manages to see his vast experiences through the eyes of an enthusiastic fan. If you don’t know much about the Turtles, Flo and Eddie or Frank Zappa and the Mother’s,... it doesn’t matter, take my anonymous word for it, it’s all quality, you’re in good hands. Extremely entertaining, for any true fan of rock n roll, enjoy the ride!

Never thought I would write this book so much