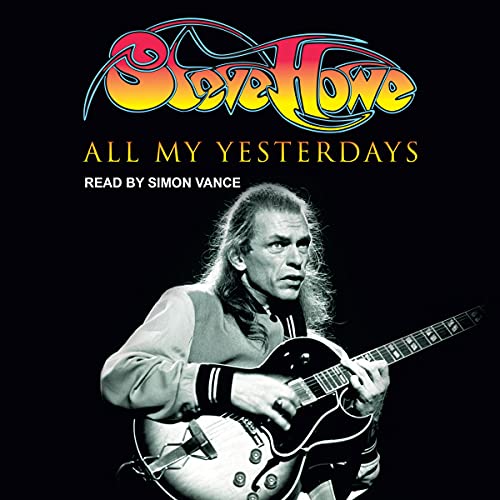 Renowned guitarist Steve Howe tells his own story in his own words, often unflinchingly as he recounts times of triumph and torment amidst the cream of the UK's prog rock bands.

Best known for his work with Yes, a group prone to sudden upheavals, and AOR supergroup Asia, Steve Howe's passage through these and other bands is a roller coaster ride of constant touring, tense recording sessions, and frequent trips to all corners of the globe. A workaholic, he soon realized that the temptations of the rock 'n' roll lifestyle weren't for him and instead dedicated his life to excellence in musicianship.

Born in North London in 1947, Steve got his first guitar at the age of 12 and thereafter devoted himself passionately to mastering its intricacies. After spells in psychedelic bands of the late '60s, he was invited to join Yes in 1970, thus finding himself in a spotlight that shines to this day. In the meantime, he raised a family, adopted vegetarianism as a lifestyle, and watched as many of his peers succumbed to the impulses he managed to avoid. As well as Yes and Asia, Steve has led bands of his own, released numerous solo recordings in many different musical styles, and amassed a legendary collection of priceless stringed instruments.

What listeners say about All My Yesterdays

...Not funny? I think? The book opens with the story of Yes's induction into the RnR HoF, and he mentions "funnyman" Rick Wakeman hogging time with an impromptu stand-up routine (which cut into Chris Squire's widow's time). He lets us know in no uncertain terms what he thought of this, and now I'm looking forward to the rest of the book with a mixture of glee and a bit of trepidation: uh-oh, here it comes, this is going to be HOT!!! I've been a huge Yes (and Howe) fan for 47 years, and I'm not sure I WANT to know everything that went on behind the scenes, but there ARE things that have been bothering me for many years, and I wanted to hear Howe's take on them.
Well, there was one dig at Wakeman somewhere in the following text (I THINK it was about Wakeman; it was something about someone who was very displeased with TFTO being too convoluted, only to go on to create many convoluted albums on his own). Chris Squire's famous tardiness and his overindulgences during touring in later years get a mention, but other then that - ooof...

He does talk about guitar players who have influenced his work, and mentions contemporaries of his whom he admires. There's a nice bit at the beginning about his childhood and teens, and interesting info about his coming up in British rock scene. But, once we get to Yes, things get markedly dryer. There's some info - not barely enough - about the making of the albums during their incredible run in the 70's, but there's very little information about his relationship with his fellow musicians. The book feels like a never-ending list of tours and guitars (and cars), but there's very little information regarding anything that really matters, Asia is formed, they record, they preform, john Wetton goes away, John Wetton comes back, John Wetton says he can't work with Steve, Steve says thank you very much and leaves... What? What happened? How did you feel about it? How did it feel when you got back together, many years later? Nothing.

Yes's split with Jon Anderson is something that is very important to many Yes fans; well, too bad if you wanted to learn Howe's take on this, because you won't get it. Jon had an accident, Jon was sick - whatever, here's Benoit! And it's all throughout the book, there isn't really any of Howe's perspective about people who've been a major part of his life for 50 years...! At the end of the books he thanks Roger Dean (whom he had mentioned very favorably throughout the book), mentioning the amazing work he had done, despite "some pratfalls"; again - WHAT? Why was there no mention of this anywhere in the book?!

Steve Howe is one of the greatest guitar players of all time, and Yes the greatest prog bands. They have been giving me immense pleasure over the years, and will surely continue to do this for many years to come. The one good thing about this book was that it reminded me to go back to The Steve Howe Album, which I hadn't listened to in decades. And, at the end of the day, it's really all about the music, right?

My favorite Prog Rock group and their de facto leader will always be there to remember and enjoy.