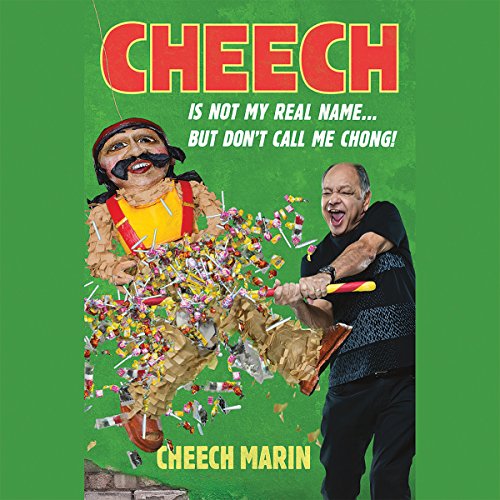 Cheech Is Not My Real Name

The long-awaited memoir from a counterculture legend.

Cheech Marin came of age at an interesting time in America and became a self-made counterculture legend with his other half, Tommy Chong. This insightful memoir delves into how Cheech dodged the draft, formed one of the most successful comedy duos of all time, became the face of the recreational drug movement with the film Up in Smoke, forged a successful solo career with roles in The Lion King and, more recently, Jane the Virgin, and became the owner of the most renowned collection of Chicano art in the world.

Written in Cheech's uniquely hilarious voice, this memoir will take you to new highs.

What listeners say about Cheech Is Not My Real Name

Get to know more about the funny guy

What made the experience of listening to Cheech Is Not My Real Name the most enjoyable?

I always enjoy biographies narrated by the author. What I did not realise is how much he did outside the Cheech and Chong duo.

What an absolutely stupid question!!!!

The narrator was Cheech

Why does Audible force you to answer questions instead of give you free voice. Any one who grew up with Sister Mary Elephant will really appreciate the man looking for "Dave"....

I binged this book in 4 days. Thanks Cheech Marin for sharing your whit, charisma, insight and story!

One of the Funniest/Intelligent Guys on Earth!

I first heard Cheech & Chong when I was in elementary school, and man did they change my outlook on life - for the better!

So mucg to learn about thw life of Cheech Marin! I saw Cheech speak live at an LA Library book event to launch this book in Feb 2017.
In person, he's hilarious, charming, gracious, a great story - teller & performer.

I bought the audio book that ni.
I was a little surprised & disappointed re-reading many of Cheech's great stories he'd told on stage that night in the audiobook, just without all the personality & enthusiasm.

It doesn't make sense since he's such a great actor, performer, improvise, comedian & voice over artist.

But while his life stories are still interesting, it's not nearly as lively & great as having seen him in person.

A great read tho!

thanks Cheech the world is a better place with you in it. you make us happier

It was better than you or I could imagine

Drugs were not glorified which I appreciate

Be careful where you listen to it as you will laugh and laugh out load!

Fantastic read for fans and people just learning about the man

I want to meet Cheech

This was so enjoyable and interesting. So many things to learn beyond the comic routines and what was splashed in the news in the 70's. And having Mr. Marin reading it was even better. Well worth my time.

If you're a Cheech fan. Then this is the book for you. Enjoy! I know I did.

Cheech is the best

I was amazed with his life and memoirs. I enjoyed it so very mucho!
I recommended it to my hermano.

Discovering Cheech and Chong in the early 70"s and having the pleasure of seeing them in concert 5 years or so ago, I had no idea they were as prolifically talented as both were. I was aware of Cheech's other roles after he went solo. My only problems were slipping forward and backward confusing me at times. Otherwise this was very interesting interesting, eye opening, touching, maddening and inspiring.