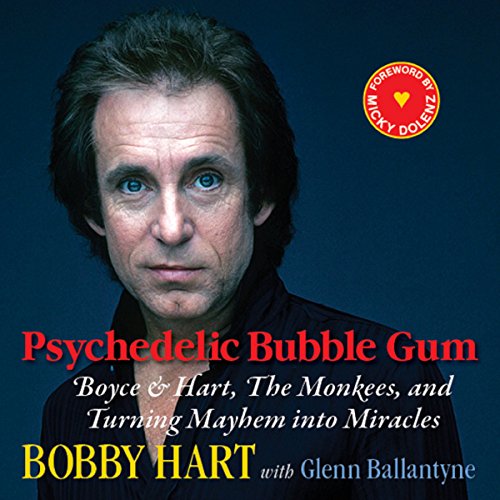 From the man who wrote the songs that outsold the Beatles and the Rolling Stones in 1967, comes the story of the first decades of his life in Hollywood and New York. Immerse yourself in Grammy, Golden Globe, and Academy Award nominated songwriter Bobby Hart's world as he shares the story behind his success; from humble beginnings comes a musical goliath. Psychedelic Bubble Gum is an exclusive glimpse into Hart's personal journey as he moves on the fast track to fame. This vivid narrative follows Hart's gradual rise in the music industry as half of the duo Boyce and Hart, as he and his friend and partner Tommy Boyce wrote the songs that launched the Monkees to stardom, and eventually reaching over 100 million in sales. Along the way is all the heartbreak and drama that accompanies fame and fortune - an uprooted life, conflicted morals, and the sacrifice of his wholesome high school sweetheart Becky. With unbending sincerity, Hart details a life of extravagance, betrayal, loss, disillusionment, and an unstoppable personal struggle to find spiritual balance, peace, and love. Psychedelic Bubble Gum is a roller coaster ride through the 1960s and 1970s during America's whirlwind era of free speech, mysticism, and psychedelic pop culture - and, of course, rock and roll. Packed with intimate behind-the-scenes encounters with pop star royalty, Psychedelic Bubble Gum is tempered by humor, honesty, and a singular understanding of the industry.

Fascinating, absorbing and full of incredible stories. Bobbys narration is relatable, immensely enjoyable and helps paint wonderful pictures of what it was like to write and work with a vast range of people and Popstars, both creatively and culturally. Highly recommended - my favourite book by far on the bubblegum period and one of my favourite music books in general.

I can’t decide how I feel about this book. For one, it’s about a third too long. Two, for those those of you expecting sex drugs and rock and roll........don’t If you want sugary coated religious teachings shoved down your throat in the guise of a rock autobiography. This is the book for you!

A fun and surprisingly powerful book

Bobby Hart delivers an amazing account of his life and career filled with laughter, wonder, miracles and amazement.
I got so much more from this book than I ever imagined. Thank you for opening up and sharing your truly remarkable life.

Have Bobby Hart read you his life story!

Would you listen to Psychedelic Bubble Gum again? Why?

I enjoy listening to different chapters over and over because the story is so interesting. It's always amazing to hear a story like this from the author himself.

Since this is an autobiography, the favorite character has to be Bobby Hart. The story begins when he is young and basically clueless about the music business, and we get to follow along with his ups and downs. Bobby is a real person who has done amazing things. This makes the book inspirational and honest.

Have you listened to any of Bobby Hart and Micky Dolenz ’s other performances before? How does this one compare?

I have listened to numerous pod casts and interviews with both stars. This recording is really special. Micky's foreword is open and honest and his voice sounds great. Bobby's story telling and voice throughout is amazing.

Yes! But I didn't have the time to do that. I had already read the book but it was so much more captivating to listen to it, from the person who lived it.

So much joy came from this book!

This book brought back all the happiness of the 60’s and listening to the music of the Monkees and Boyce and Hart. The memories are wonderful! I’m so grateful to Bobby for bringing back my youth…and getting me to get back out there and see Micky Dolenz in concert! Yes, Bobby, we heard…and we’re still listening.

Expected more about the Monkees. The book wasn't as in depth as I was hoping but still enjoyed overall. If not a fan of sixties rock and roll the book might be boring.

Great first half! Sort of...

I read all of these rock 'n' roll era biographies. This was an interesting read. Or listen I should say. I would say overall it was bland with some interesting points during the 60s during the height of their careers in the monkees era.

The last hour or so really got stale and he pretty much just wants to sell the reader on his way of life and religion of yoga. It was like a two hour movie drawn out for three hours.

The narration was read by the author, he reads it well although he sounds like he has a mint in his mouth and takes a lot of deep breaths.

I would say skip the book and watch the documentary.