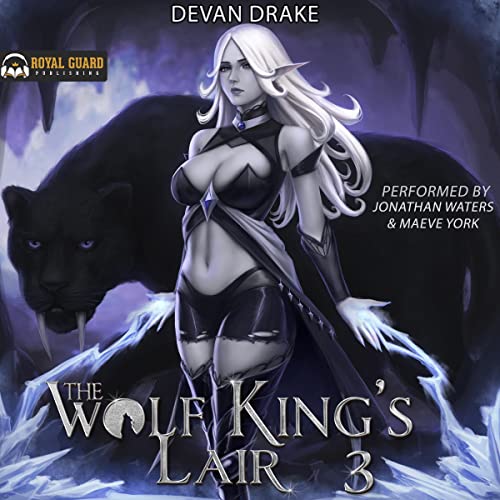 By: Devan Drake
Narrated by: Jonathan Waters,Maeve York
Try for £0.00

He has conquered and subsumed a second dungeon increasing his power and pulled one over the Divine Lords in the process.

However, he is aware this will bring new difficulties to his door and the Divine Lords are unlikely to take their humiliation well.

He is going to need to continue his plans of expansion which now includes a second dungeon as well as an adventurer guild, the Dark Moon Rising, ready to answer his commands, well mostly ready.

There is also the not so small matter of his unfinished business with Jen'Zadeer Shadestar. She remains just out of his grasp, but not for much longer.

What listeners say about The Wolf King's Lair 3

It keeps getting better!

Still loving this series. The author is getting better and better with each new release and I can't wait to see what's next!

great book. Really loving this story so far and this book was Amazing too. absorbing the dungeon's power is super cool and the characters are well written.

I am really enjoying how this story is progressing. Everything from the adversaries, challenges, world building and team building just keeps getting better. Excellent story.

more of the same great series

if you've enjoyed the first 2, you'll really enjoy this one as well. more of what makes this series great and more of the great story line that's driving it as well. can't wait to see how this ends up over the next few books.

the story and characters are good, but too many stats were given to distract from the story.

Book 3 in a great series by Devan Drake!

Devan Drake continues to write an excellent series with book 3 of the Wolf King's Lair. The characters continue to develop as well as the world around them. Some amazing adventure and some exciting scenes. Overall I love the story and look forward to what is coming next from Devan! Audio Version: As always, Jonathan Waters and Maeve York do an excellent job with their own characters and the overall narration.

I'm luvin the progression in this series. Lots of spice but even more planning, conniving and exploiting the system. Dungeon vs dungeon raids? Who would have thought that would be exciting? Thank you Jonathan Waters and Maeve York for doing this story justice. I'm impatiently waiting for the next episode to see how he handles the next obstacles in his path.

I’ve really enjoyed this series, there’s so much happening..so much greatness!!
The narrators are amazing.
I hope the next one is on audible soon.

OMG WHAT A GOOD SERIES. This has been an incredibly enjoyable series so far. listening to the after notes just gets more and more excited for what's to come.

Dax is not ignorant and watching him learn and grow is amazing His women are all unique and awesome! keep these coming.

I think this series is great

I am very happy with the pacing and character development of this series, this is a OP MC style of book but also a MC who is in constant conflict with powers he shouldn’t be able to overcome yet does so thru grit wit and determination.