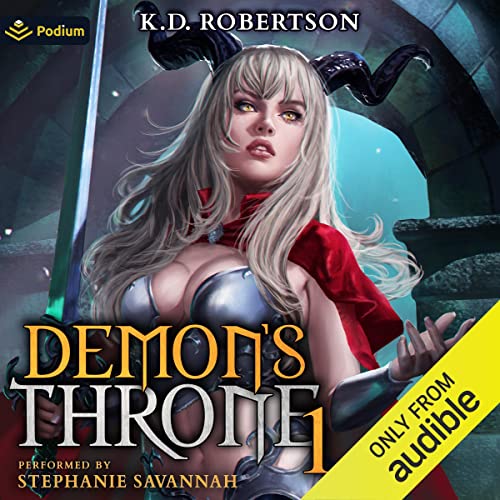 By: K.D. Robertson
Narrated by: Stephanie Savannah
Try for £0.00

Rys awakes to the smell of blood and nearly two thousand years of dust.

Maybe he overslept a little too long. Once, he was a great champion and general in the demonic empire that ruled the world. Now, he’s been erased from history.

He’ll need to remind the world of the price of forgetfulness.

Now is the time to build his own empire, as the ancient powers of his time are long gone. Rys has an archipelago to conquer, women interested in extending their bloodline with him, and a mysterious labyrinth that holds the secret to why he was sealed away to begin with.

But a contract with Hell is eternal. His old employers want to turn him into their pawn, and Rys must become powerful enough to remain free.

That’s not a short to-do list. But half the fun of taking over the world is the challenge.

What listeners say about Demon's Throne

K.D Robertson is the best in the genre!

All are exceptional novels and I feel like Demon's Throne benefits the most in audiobook format, If you have a choice between the b-book or audio, I would recommend audio.

Rhys, a former general of the Infernal Empire wakes up in a Castle 1500 years in the future, with his power's restricted and certain memories missing. He gins to gather allies and create his own empire on the Archipelago he is on whilst trying to regain his personal power and solve the mystery as to why he has been missing for the last 1500 years,

Stephanie Savannah is exceptional once again and is undoubtedly in the top 2 female solo narrators in the genre. not only is she the narrator for Robertson other series but also Fostering Faust by Randi Darren which again is considered one of the best.

So glad K.D. Robertson had this series re-recorded. I did not enjoy this audiobook before but with Stephanie Savannah(who did an amazing job with HS) Demon Throne is definitely back on par with HS. Bought this series before, and am buying it again.

Getting Spoiled Over Here...

This review is full of bias because I'm a big fan of both the author and the narrator. Robertson writes stories with a lot of world building and complex characters, while Savannah can bring just about any story to life with technique that would leave you certain that more than one voice actor is performing.

The story is about an old war general that has been sealed for over 1,000 years, awakens to find the world has changed. With old enemies and allies gone, he decides to create his own kingdom with assistance of the denizens of the land. The MC is cunning and in a world that is now very malleable from what it was before. A lot of plot development, political intrigue, interesting characters (both human and non-human, a few of which that are very funny) and a good amount of action sets the stage for a huge story.

If you're interested in a mature Kingdom-building fantasy story with politics, intrigue, action, a lot of great characters and some...spice (keep in mind I did say mature), then this series is highly recommended.

great series, if you're on the fence give it a try

the story is great, it's just not erotica there is actually a plot and 3 dimensional chars in the book!

the narrator does an amazing job with brining all the different chars to life.
Stephanie is the most attractive woman I've never seen.

The reason to read this book is Phara the kitsune, and her relationship with the MC. Let me sum her up with this brief exchange.

Phara is leaving. Girl she has protected since birth says, "Aw, I don't get a hug? What kind of godmother are you?"

Phara says, "The tough love kind," and smacks the girl with a tail.

She's incredibly tsundere, of the rolled eyes or slap-upside-the-head variety, always with a dubious comment. But in between a lot of that is some very delicate or bashful flirting with the MC, and slow acceptance of romance. This is so slowburn that the MC and her don't even seal the deal in this book. Oh, and just about every paragraph about Phara has her doing something with her tails. Plus several scenes involving touching and teasing those tails. I'm a tail-freak and even I thought it was a little much.

The actual adult content comes from very short scenes involving another woman with massive chest. Like, her two defining characteristics are her chest and how much she is into the MC absolutely conquering her and rubbing her nose in it. The scenes themselves are very brief mind you, blink and you miss it, and it's a bit jarring compared to how blushing and coy the rest of the book is. Almost like it was tossed in to hold the reader over for the next book.

All of this is buried in the minutia of empire building. The author loves his super detailed politics, and nerding about magical theory. The action, like the sex, happens very quick and is rather perfunctory. Most if it honestly didn't grab me at all and was a bit boring at times.

One final point. A thing I like about K D Robertson's books is that there actually are male minor characters. In other authors works the MC is the only guy on the planet that's not an asshole or villain.

I'll read the next book but I'm not in a hurry to. The relationship with Phara, and other scenes of witty banter or other cute touches with other characters is nice, but the overall book left me a bit cool. Still you might like wading through it.

relatively speaking the author is still new or perhaps falls under the banner of independent author. I have read and then listen to every book available through Amazon and Audible from this author. I think it's safe to say that I greatly enjoy his work and highly recommend it to anybody reading this review. for those who don't know, this story specifically centers around a human raised in essentially a demon Empire. in theory he was nobody before becoming one of the greatest generals of all time. it is a bit of a mystery as he is waking after having been locked away. he does not know how he came to be where he is or how he ended up being entombed. he does shortly find out that it's been approximately 1500 years since he last walked the Earth. throughout this book he is in the beginning processes of truly understanding what it is to be free as he builds an empire, reclaims his power, and investigates the mystery of his confinement and subsequent Awakening. I'm so excited to see this story being given the audio treatment. the narrators performance is top-notch and she's easily within my top five all-time favorites. I eagerly await the others receiving the audio treatment and even more so for the fourth book to come out. currently as of the time of this review there are three books total in the series with the second book getting an audio release sometime in December. lastly I'll just say Well done to everybody who has had a hand and bringing the story to us the listeners and I wish you all the best going forward.

So I have to say it's better than many other books in the genre especially in recent years. However it lacks any complex magic system, interesting world- building, character growth and many other things that could have made it better. However it was worth listening too and I will get the next book in the series. The MC is in a sense OP. There is a lot of tell and little show. Very few fights that actually are interesting. Still for some reason I felt it was a worthwhile listen.

So glad they re-recorded this!

okay so I've pretty much listened to everything K.D. Robertson has produced, so when I got a hold of demon's throne one under the old narrators I was excited. only to find an audiobook where they made Grigor sound like a goddamn muppet... and every female character spoke with this halting Stilton voice and my disappointment was immeasurable and my day was ruined...

flash forward to finding out that Mr. Robertson was getting it. re-recorded under the talented ministrations of Stephanie Savannah... You had my curiosity, but now you have my attention!

this is a marvelously done audiobook, Stephanie Savannah is just so goddamn talented. I wish so many more authors used her to narrate their audiobooks, especially the smutty ones. as for the equality of the book itself, the story is great, you definitely get strong anti-hero vibes from Reese. each of the female characters are well fleshed out and not just a Finley veiled trope for the main character to stick his penis in... there's dare I say romance and a budding relationship forming between Reese, his fox, his merchant, and his mayor... and a certain spellblade as well.

seriously though, if you're still reading this by the book you'll thank me.

Really liked it. The good narration adds so much to a title and it was well done hear. Can't wait for the next book and hope we see a book 4 soon.

The whole book feels like a bad copy editor added sex scenes that are often non- consensual and completely gratuitous. The fun world magical adventure of a demigod that makes girl orgasm by explicitly stared refusing his advancement until he dominates them, against their will. Or rape as society labels this action.
The motivation for ALL the romantic moments read like a 13 year old journal. This is less, harem fantasy then it is imprisonment and slavery by circumstance. So if that sound good then the reader is excellent and everything is else is well written.

Nothing but a harem power fantasy

Nothing but a harem power fantasy written like fan-fit.

Male hero with a harem of girls ousting after him and 1 (just 1) single male token friend.

I regretted this book a lot.

This was a decent concept for a story it's just too bad the writer had to add the main character to it. He completely ruins it and I couldn't continue are there any authors in this genre that writes stories where when a new female is introduced her name is given before her shape and measurements

The narration was great