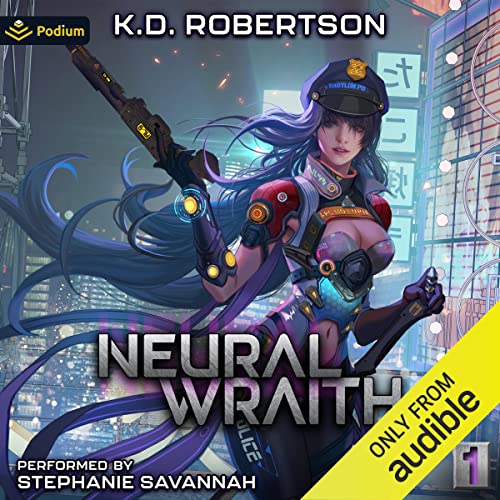 By: K.D. Robertson
Narrated by: Stephanie Savannah
Try for £0.00

In Neo Babylon, your neural implant is your identity.

You use it as your credit card, to surf the Altnet, to chat with friends, to login to work or school, and to be pestered by advertisements. Anyone without one is cut off from society.

Nick can’t get a neural implant. That fact turns his daily life into hell, but the city's underworld has its plans for him. Being invisible to the city’s omnipresent tracking has its perks. Without a neural presence, he’s someone who is felt but not seen—a wraith.

His natural advantage leads him to work on illegal projects, including one to create human-like AI “dolls.” Until the government shuts down everything and Nick is reduced to a life of back-office IT drudgery, under strict monitoring.

But the city isn't done with him, and the police soon knock on his door. Those advanced dolls he created are now Babylon’s law enforcement. And they have an offer for Nick: help them reshape the city and root out corruption from the inside.

Who better to investigate the city than a man who cannot be seen by it?

What listeners say about Neural Wraith

This new series is fantastic. This author is just a really good writer. The sex is a little off, because of the inhuman feel of the robotic women, though that may change with the introduction of new harem members in the sequels.

Stephanie Savannah does an excellent job differentiating the characters and emoting with them.

if you have listened to any other Stephanie's work with K d Robertson, then you know the greatness of this already.
if not, then trust me and try this adventure.

What an amazing book. The setting and world building is superb and the the characters feel fleshed out and interesting. The story drove me to listen to this almost nonstop until the finish. I'm definitely getting the next part as soon as it's released.

K.D. Robertson is the bets author in the genre!

Great Cyberpunk novel from K.D. Robertson with detailed world building and intriguing plot like his other series.

Felt a little long, but didn't overstay its welcom

Great cyberpunk noir. It was also really noice to see a main character who is so useless in a fight, his allies spend more effort dragging him into safety and bodyblocking damage than anything else.

The audiobook narrator did an excellent job.

It's a really good story with one of the best narrators. I have read/listened to most of K.D's work and it always keeps me engaged and interested. Stephanie Savannah is always a delight to listen to. The characters are interesting and the plot will keep you guessing. I can't wait for the next book.

A great world with a good story

Not all authors can craft a world and story that manages to maintain the suspension of disbelief through the whole thing. Roberson did with this book, and I can't wait for the second to come out in a few months.

The characters actually have depth, each scene has extra details that fill it out nicely without going overboard, and the world details build on each other very well. 100% recommend this.

For those concerned about it, there is only one true smut scene, so if you need to skip, you don't miss too much at all.

it's a good listen. never boring, trickles along without real tension, but with interesting things happening constantly.
kinda like slice of life but always along the whodunit and what is going on line of storytelling.

usually books like this are boring to me. this one had actually good dialogue, some nice SciFi elements that are original, not standard tropes.

I'm gonna buy the next for sure

Competent mystery back by excellent dialogue

It is is rare to find a book where the strong suit is it’s dialogue and contemplations over the world they are in. This cyberpunk mystery reminds me of Altered Carbon. As every good cyberpunk city setting, the city does not care about the people. So many heavy themes were handled deftly, like what does it mean to be a police force ran by the rich elites, just how much is a human life worth in the pursuit of advancement, or what our world would look like if AR and real life were merged. This is such a hidden gem of a book and story, could not recommend it more.

very well thought out book never liked detective books but this one did a good job I highly recommend it plus I'm a fan of K.D and also great narration from Stephanie Savannah like always she's awesome can't wait for book 2

Narration was excellent. The story as a whole was very enjoyable and kept me engaged throughout the whole thing. backstory and setting were great. This first book. I have only listened to this book on audible haven’t read yet but after this I may have to start reading this series also. Really excited for the next book in the series to release its audiobook will definitely preorder when available.

No spoilers, this book, both kindle and audio took my by surprise and it became and instant fav. The voice acting from S.S. Is top notch and matched my internal idea of the characters. I would highly recommend and look for to more by this author.

I have listened to several of this author’s books in the past, and I think this is the best one. Not only did I enjoy the story, including the mystery behind of what was going on, but the narration by Stephanie was fantastic.
The author is great with details and explanations so that even though sometimes you feel like you are shoulder deep in trying to figure out what is going on by the end, everything makes sense.
I would highly recommend this book.

KD Robertson knocks it out of the park

so bit of a spoiler. I have been a big fan of KD Robertson for quite a while. this is the first cyberpunk book by him and it's absolutely stellar. huge props to Stephanie! Savannah for her marvelous narration. she is always a treat for the ears because of her sexy voice. The intricate story gives her so much to chew on and every moment is her. just chewing up that scenery with her marvelous performance.