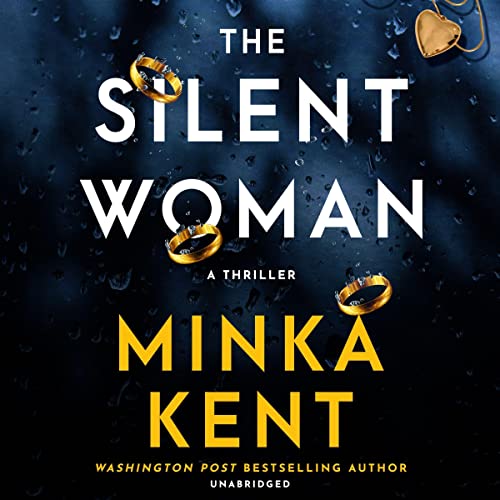 By: Minka Kent
Narrated by: Christine Lakin,Kate Rudd
Try for £0.00

Newlywed Jade Westmore has finally found her forever in husband Wells, a charming, successful, and recently divorced architect—only there’s one caveat: behind the gates of their elysian estate, hidden from street view in the caretaker’s cottage … lives Wells’s first wife, Sylvie.

Three years ago, the original Mrs. Westmore suffered a nervous breakdown—and hasn’t uttered a sound since. Not a physician, psychologist, or world-renown specialist has been able to elicit so much as a word from the silent woman … until now.

On an ordinary Tuesday while Wells was away—despite instructions to never disturb the fragile woman—Jade visited her isolated predecessor bearing a peace offering: a bouquet of white lilies. Only she wasn’t expecting Sylvie to have something for her as well: a slip of torn notebook paper with a single word scrawled in shaky black ink.

What listeners say about The Silent Woman

From the start I thought I'd struggle to carry on with it. I'd like to say it got better but it didn't. I don't like giving bad reviews and whilst it wasn't a bad book it was just average. It was predictable and at times not believable or relatable in any way which is a shame. Just an easy listen and if you zone out you can easily get back into it without rewinding. Didn't like the narrator that much. Dissapointing

This book had me gripped from the get go!
I loved it. A must read.

While it started off slow and a bit difficult to get into at the beginning. I found myself having to replay the first few chapters to understand what was going on. As I started to get into it, it got easier to were I found I couldn’t put it down until it was finished. By the end I really enjoyed it 10 out of 10 👍🏼

enjoyed the whole book from start to finish. i listened to it in one go. the end was satisfying too, so i can only recommend.

Enjoyed it once I got into it

Took a while to get into then it finished too quickly. Will look for others by the same author

this book captures your imagination very quickly and keeps you involved in the lives of the characters.its not a terrifying thriller but I don't believe it aims to be, iit is however a lighter story of someone willing to risk it all for a person they don't know, even to go as far as to risk Thier own life. But who is the person that is out to get them???

Minks Kent is a rising star in the thriller genre

This is the third book of hers I’ve read. Every novel gets better than the last! Cannot wait for the next one!

I couldn't stop listening to this story! It was very intriguing and has several twists!

I loved the book. I wish the ending had more detail but it was a great book. I didn't want it to end.

Meh… it wasn’t bad just wasn’t good. The story line was fine, just a little unbelievable. You marry a man who’s disabled wife is living in the backyard?! Some of the obvious things the protagonist just dumbly followed frustrated the crap out of me. Naive woman narrative. A little ridiculous. Wasn’t surprised & was definitely expecting another twist as the attacker was pretty obvious, but nope no twist. I did like the old Hollywood nods & the Narrator’s did well.

I'd like the 7.5h of my life just stolen returned

This is the absolute worst book I've ever listened to. Here I was thinking there would be a great, surprise ending when there's literally nothing surprising at all. I'm still in shock at just how horrible this book was. I pre-ordered it and was so looking forward to listening to it, only to be traumatically disappointed. wow - just WOW

A total waste. Stupid characters, absurd and predictable story. Don’t hold your breath for plot twists—there are none. I am shocked this was published by Blackstone. I usually assume their books are well done. Will not do so from now on.

There wasn’t any climactic situation in this book. Very bland in my opinion. I was expecting more from the ending.

Whatever you you’re thinking after reading/hearing the description is all u need to know. Just a bunch of blah in between. Narration was ok,

I thoroughly enjoyed this book! Every time I thought I had it figured out, it made me change my mind. Definitely worth the read.

I was really into this book… the storyline built anticipation quickly and whoever did the voice of Jade was honestly one the best performers I’ve ever heard! Sylvie on the other hand… not great. As the climax approached, I was really hoping for some twists and turns… something to catch me off guard… something unexpected. But sadly, that was not the case. It wrapped itself into a pretty bow and ended just as I thought it would. It’s was very well written, but predictable. I would definitely like to read some other books by this author.