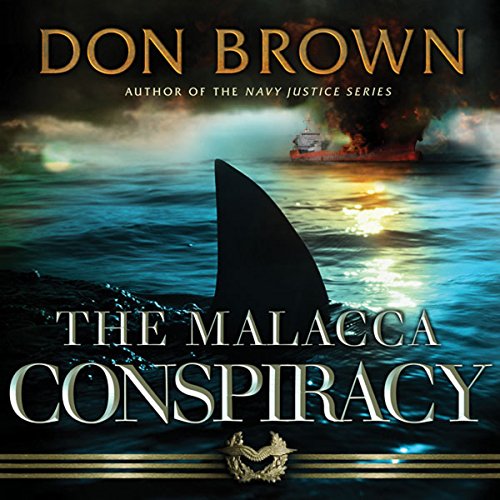 From beloved author Don Brown comes a bone-chilling tale of terrorism on the high seas.

A daring plot is hatched to finance a nuclear attack against American cities, and Zack Brewer and Diane Colcernian are thrust into the midst of a sizzling race against the clock to foil the conspiracy before disaster strikes.

The president of the United States orders ships of the US Seventh Fleet towards the Malacca Straits to reassert control over the sea lanes, but with time quickly ticking away, will they arrive in time for Zack and Diane to survive this dangerous and high-stakes drama of life and death?

In a lightning-paced thriller of political assassination and terrorism on the high seas, The Malacca Conspiracy will whisk you from Singapore to Indonesia, from Malaysia to Washington. A whirlwind mix of love, war, and high-stakes geopolitical roulette, for Zack and Diane - your favorite JAG characters from Don Brown’s best-selling Navy Justice series - it’s the last chance for a longstanding romance that is now or never.

"The plot surges headlong with energy; characters--from various cultures--are both believable and accessible; rich dialogue flows. A Bible-quoting evangelical Christian president in the war room is over the top, and while evangelical hot-button issues may please some readers and turn others off, Brown has penned another winner." ( Publishers Weekly)

What listeners say about The Malacca Conspiracy

No - I like my military thrillers to at least make an attempt at authenticity.

What was most disappointing about Don Brown’s story?

Actions of protagonist and antagonist just not believable.

Was The Malacca Conspiracy worth the listening time?

I am a retired Navy Commander, and I bought this book because I had read that my first ship, USS REUBEN JAMES, played a big role and the plot looked interesting. Unfortunately, I was very disappointed in the execution of the book and the accuracy. I won’t bore you with the list of military/Navy mistakes, but there were so many it made the listening very frustrating. Personnel doing things out of job description of their rate or rank, using equipment that doesn’t exist on certain types of ships. Also, lots of preaching: apparently everyone in the Navy and the government prays a lot. I served nearly 3 years at the Pentagon and never once did I hear it referred to as “The Building.” Must be a JAG thing. Good idea executed poorly. To finish the book I wore out my “I believe” button.
One note on the Narration. I have not listened to the previous 4 books in this series that were criticized for having a British narrator. This narrator is American, but I did have problems distinguishing the characters. All Indonesians bled together, and all Navy personnel seemed to be either from Chicago or from the deep South. Not sure what that’s about.
Overall I was disappointed. I will not be listening to the other 4 books in the series.

Another homerun by Don Brown

Have you listened to any of Dick Hill’s other performances before? How does this one compare?

as with Don Brown's other excellent works, I love the fact that the book kept me on the edge of my seat, while being free of any profanity or immorality

All though the overall story line is good. the reader lacks a lot if refinement. the major issue is the recording stopped in the 115th chapter. This is about the half way mark.

1 star is me being generous

What an overhyped piece of garbage. First, let me say I'm a Christian. If this book was listed as some sort of spiritually uplifting book, it might get 2 stars. Again, me being generous. I've read enthralling Christian books. This isnt one of them. I'm about 30 chapters into it and it is just boring me to tears. Want to read a wonderful book about a Christian? Read Unbroken. That story is everything this one promises but isn't.

Wonderful story in the series.

Not to be missed story of faith, courage and service. Excellent character development, plot holding your attention to the very end!

GREAT ending for the series!!

This has been an outstanding series. We have loved the personal stories, as well as the Navy, politics and drama. Don Brown has done an incredible job of research and weaving a continuous storyline through 5 books. The ending was worth the entire journey! We highly recommend this book and series!!

Such an awesome series. I especially loved the ending. Outstanding narrator. This is an author that I will re read.

Written from a narrow worldview perspective, this book leaves little room for intrigue, suspense, and imagination.

Book was good enough to keep you listening. But there really was too much going on, and I thought it went way over the top with what happened. Narration was 5 stars as usual with Dick Hill behind the microphone.