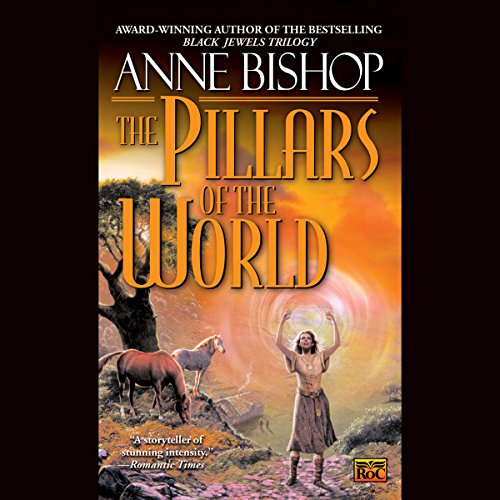 The Pillars of the World

By: Anne Bishop
Narrated by: Erik Synnestvedt
Try for £0.00

The youngest in a long line of witches, Ari senses things are changing for the worse. For generations, her kin have tended the Old Places, keeping the land safe and fertile. Now, she finds herself torn between the world of mortals and the world of Fae, who ignore what occurs in the mortal world, for the roads between the two lands are vanishing into thin air.

"Bishop only adds luster to her reputation for fine fantasy.” (Booklist)

“Reads like a beautiful ballad involving two humans who believe love is the ultimate magical force in the universe....Fans of romance and fantasy will delight in this engaging tale.” (BookBrowser)

What listeners say about The Pillars of the World

Love this trilogy but terrible narrator!

I’ve read this myself so many times but thought I would buy the audio book for while I’m working. Terrible narration! Why does every sentence sound like either a question or a statement? Kind of ruined the beautiful world that Ann bishop created! I would have also expected a story from the perspective of a female protagonist to be narrated by a woman! I would advise reading the books before listening to the audio book!

Make sure to listen to the sample before purchasing this. I did not and really regret it. While some may not be bothered by the narrator, I was. He has a strange way of ending the sentences that makes every sentence almost sound like a question. I found it very distracting and unfortunately can not finish this. I've enjoyed every other Anne Bishop book I've read, or listened to so I know it's the narrator.

Well worth the time

Anne Bishop, in my estimation hasn't written a bad book yet. In this series, the central players are the witches and the Fey and the war against the inquisitors. As with all her works, the characters are rich and the story flows well. The only downside is the narration by Erik Synnestvedt, who has an almost 'Capt. Kirk' style of speaking

Would you listen to The Pillars of the World again? Why?

I am actually listening to the series a second time right now. The story is wonderfully told (the 2nd and the 3rd are even better) Like many of Anne Bishop's characters, these are ones that you are really able to grow attached to. I really wish she would write more in this series.

I love the bantering that happens between the male and female characters. There are quite a few "laugh out loud" moments.

What does Erik Synnestvedt bring to the story that you wouldn’t experience if you just read the book?

Honestly, he took a few chapters to get used to. There was always this sort of "inflection" at the end of each sentence that was annoying at first when he was just reading non-dialogue stuff. However, once he started getting into the characters voices, he really does quite well and didn't find the inflection annoying anymore. (I still like John Sherian best for Anne Bishop's books)

Defnitely! I would love to be able to listen to all 3 books in the series in one sitting. Alas, I must have a job to be able to pay for my book habit.

Listen to all 3 books! The first is a good tale but it really just sets the background for the other 2 which are awesome!

Narrator was so bad, I couldn't follow a story that I know well. I stopped listening.

A good listen so far.

I'm about a quarter of the way through listening to this book and am truly enjoying the story. However, I agree wholeheartedly with John and P Brown about the narrator. He sounds as though he would do better reading a technical manual. This story could be a much easier listen. A female narrator would give a total different tone on the book.

Fans of the Black Jewels Trilogy should listen.

Would you listen to The Pillars of the World again? Why?

I have loved the Tir Alainn trilogy since I was a teen, and the audiobook version doesn't disappoint. The reader reminds me of John Sherian (sp?), who narrated all of the Black Jewels books. He has a little less variety as far as character voices are concerned, but his accent is the same, and he still seems to -perform- the book, more than -reading- it.

Give it a shot, especially if you liked the BJT. You won't be disappointed. Another review said it sounded like every sentence read was a question. I respectfully disagree. The Dune narrator had that problem for me and I couldn't listen because of it. I didn't have that issue here at all.

What other book might you compare The Pillars of the World to and why?

The Black Jewels Trilogy, and the Crucible. It's got all the mingling whimsy and brooding darkness of the BJT, and is a fantastical sort of rendition of classic witch burning drama.

His tempo is perfect. There are some scenes where a seamless transition is absolutely warranted, and he aced them all. He lets silence linger when it ought to as well.

Yes, but I fear I'd be spoiling it a bit much if I said what. Let's just say it involves Morag and a bargain.

Like any of Bishop's books, my one criticism is that she draws from obvious sources. This is not at all disguised fluffy pagan, "Wiccan" type fantasy. If that doesn't bother you, it's a good read. If you're bothered by constant references to earth as "the Mother," references to four branches of magic, the regrettably titled "Wiccanfae" and blatant references to the Wiccan rede and the Christian Bible, stay away.

I have read this book in the past so know the story is good. Couldn't get past the first chapter with how grating the voice of the reader was for me.

My ex fiancé read this book to me over ten years ago. The narrator did a great job on the character's voices. The story line is thrilling, exciting, and intriguing. The ending made me tear up a little, but they were happy tears.

but ultimately this was a great story...definitely looking forward to next one in the series.

the book is one I own in paperback form and have read several times. the voice actor has a very monotone voice and doesn't give each character a unique tone but the story more then makes up for it.