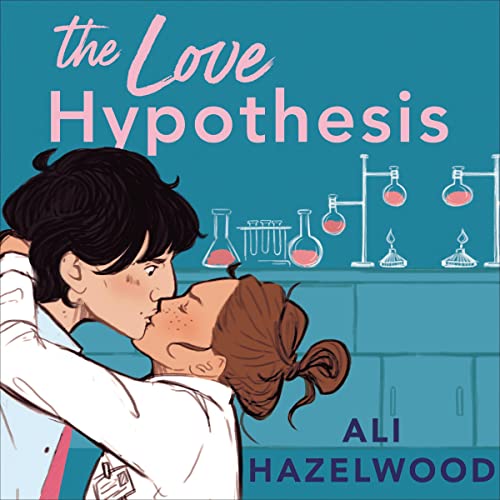 By: Ali Hazelwood
Narrated by: Callie Dalton,Teddy Hamilton
Try for £0.00

Based on the available information and the data hitherto collected, my hypothesis is that the further I stay away from love, the better off I will be.

When a fake relationship between scientists meets the irresistible force of attraction, it throws one woman's carefully calculated theories on love into chaos.

As a third-year Ph.D. candidate, Olive Smith doesn't believe in lasting romantic relationships but her best friend does, and that's what got her into this situation. Convincing Anh that Olive on her way to a happily ever after was always going to be tough, scientists require proof. So, like any self-respecting woman, Olive panics and kisses the first man she sees.

That man is none other than Adam Carlsen, a young hotshot professor and well-known ass. Which is why Olive is positively floored when he agrees to keep her charade a secret and be her fake boyfriend. But when a big science conference goes haywire and Adam surprises her again with his unyielding support (and his unyielding abs), their little experiment feels dangerously close to combustion.

Olive soon discovers that the only thing more complicated than a hypothesis on love is putting her own heart under the microscope.

What listeners say about The Love Hypothesis

This is unfair pls noone ever recommended a good book to me unless I can read at least 3 other books by the author. This was absolutely amazing I am obsessed with Adam he is definitely a demigod and same thing goes for Olive except her lack of confidence was incredibly frustrating sometimes. She is clearly super intelligent, funny, all around amazing and I hated how she let people walk all over her (I'm not talking about tom that is different). Like baby I love you but you're an idiot, I really felt like I do with my irl friends sometimes. You just want to shake them and tell them how they're goddesses and should have waaaaaay more faith in themselves. I do love the line "carry yourself with the confidence of a mediocre white man" because yes that is it. I aslo love the enemies to lovers but not really trope. Also Adam pining over Olive is everything it is incredibly cute I loved their relationship and I aslo really loved Holden. The only things I would change are the ending and the sex scene because they both frustrated me a little. There is this thing that stories with fake dating often do and it is incredibly annoying, there is all this tension and sometimes multiple sex scenes while they are fake dating but when the couple actually gets together? You get nothing. Excuse me, that is so not fair. Same thing with the ending it was soooo abrupt, I wanted them to talk more, I would've loved to hear why Adam fell for Olive in the bathroom or just see them interact as an actual couple more clear things up better. Regardless of my complaints the book was absolutely amazing and I am obsessed with the author I'll definitely read anything they publish in the future. I also think the voice acting was too tier, it made the story 10x better.

This book had amazing reviews and was a New York Times bestseller so I was excited to give it a go. I was left quite disappointed - it was unbearable in places, some of the things the characters did or said just didn't ring true and some of the dialogue felt silly. I'm also getting pretty fed up of heroines in romance novels always being the same person: don't care how they look, what they eat, are forgetful and chaotic. I feel like the author was avoiding one stereotype but fell straight into another one. On a final note, from a feminist point of view, I can't stand Olive. She continuously doubts herself, has no confidence, and tells herself she's stupid constantly. I can't stand listening to that and find it very frustrating that women are constantly written about in this way.

The story was enjoyable enough until the sex part. I am baffled that this was written by a woman...the male character is delighted that her vagina is 'so small and tight' and the female character does this weird naive psudeo virginal thing of 'will it hurt', 'I've never done this before ', 'will it fit' and 'am i doing it right'....it just smacked of male fantasy. I agree with another review that the female lead becomes tiresome with her lack of backbone after a while.

I waited for this book for so long! And it didn’t disappoint! I couldn’t stop listening, I stayed up until 3 in the morning and only went to sleep because my AirPods died!

Done in one sitting

The plot is not flawless, but despite that whole story is so very enjoyable, I couldn't put it down. That is definitely 5 stars comfort read.

What a refreshing and charming book!

This was exactly what I was looking for. Something different, quirky and which made my heart sing.

I only gave it 4* because I battled with the narrative being in the 3rd and 1st person, but once I got used it, it was fine 🙂

Best book I have read in forever!!

This book was just perfect, I don’t normally read a lot of romance but as a Reylo and if you know you know, I had to read it and I am so glad I did, it has easily become my most favourite book I have read in years and I will definitely listen to it again and again. Also the narrator did a fantastic job she brought every character alive. I only wish I could give more than 5 stars.

My new favourite book of all time

Ali Hazelwood is a goddess and we are just living in her world. This book is FANTASTIC, full of beautifully written, multidimensional characters and one of the best love stories out there. 100/10 would recommend

A book worthy of its name

funny witty heartbreaking and a lot of insecurities. but I just couldn't stop. from beginning to end absolutely loved it.

loved it binged it in 3 days, wish it didn't have to end. Great characters and great chemistry

I simply enjoyed every part. 10/10. I'm looking forward to read more form you

Great From Start To Finish

This book was so intriguing, entertaining, amazing, and I already want to reread it. The narration was so great and Callie did an amazing job of showcasing the different characters. I cannot wait for the next book in the series if this book was anything to go by and it was definitely a good recommendation.

All the tropes and I am soooo here for it

This book was the best thing I needed. The rom com made my heart so giddy and I will be pre ordering the next book

typical tropes but still so good

This book has a lot of predictable tropes but I love the fresh take of the love story in an academic setting and themes of power and consent.