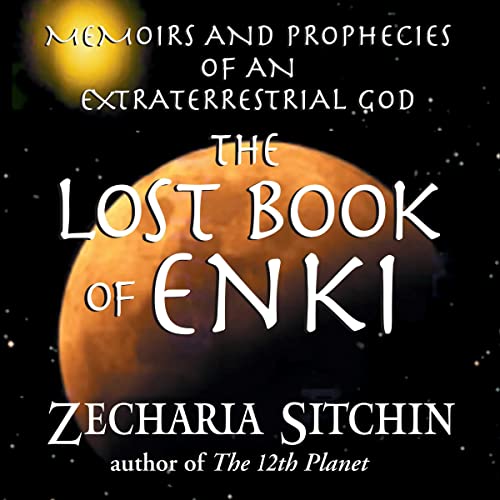 The Lost Book of Enki

By: Zecharia Sitchin
Narrated by: Micah Hanks
Try for £0.00

Zecharia Sitchin’s best-selling series The Earth Chronicles provided humanity’s side of the story concerning our origins at the hands of the Anunnaki, “those who from heaven to earth came.” In The Lost Book of Enki, we now view this saga from the perspective of Lord Enki, an Anunnaki leader revered in antiquity as a god, who tells the story of these extraterrestrials’ arrival on Earth from the planet Nibiru.

In his previous works Sitchin compiled the complete story of the Anunnaki’s impact on human civilization from fragments scattered throughout Sumerian, Akkadian, Babylonian, Assyrian, Hittite, Egyptian, Canaanite, and Hebrew sources. Missing from these accounts, however, was the perspective of the Anunnaki themselves. What was life like on their own planet? What motives propelled them to settle on Earth—and what drove them from their new home? Convinced of the existence of a lost book that held the answers to these questions, the author began his search for evidence. Through exhaustive research of primary sources, he has here re-created tales as the memoirs of Enki, the leader of these first “astronauts.” What takes shape is the story of a world of mounting tensions, deep rivalries, and sophisticated scientific knowledge that is only today being confirmed. An epic tale of gods and men unfolds, challenging every assumption we hold about our past and our future.

"The story is compelling, drawing readers into the world of extraterrestrials, gods, and ancient events in a way that seems a combination of reading that daily paper and indulging in popular fiction. Reading The Lost Book of Enki is a truly unique, intellectual, and pleasurable experience to recommend to customers looking for something a little different." (R. John Allcorn, New Age Retailer)

"This book is another brilliant example of Sitchin's scholarship. I found it exciting reading, and give it my highest recommendation. The Lost Book of Enki...has an impact that will generate discussions all over the globe." (Don Ecker, UFO Magazine)

"An epic tale of gods and men...challenging every assumption we hold about our past and future." (Branches of Light)

What listeners say about The Lost Book of Enki

Looks like person who is reading the book doesn't have any intrest in it. Very bad performance. Such a shame as very good story and writer!

well put together and narrated, although at times I had to rewind to keep up.

A must read for anyone interested in ancient knowledge. great overview of this book series

loved it. it fits with alot of archeological finds and myths and explains how humans originated

Since "The 12 Planet" was released on CDs (my preference), well..the first 3 books where released as CD Audobooks (which I don't understand why Tanto "stiffed" us and didn't complete the collection that way, I have been wondering when this book would be read. Since I have "accepted" that CDs probably aren't being made much anymore. Sad face. iTunes does not burn these Audiobooks to CDs well..

Anyway, I *was* so very pleased to notice Stephen Davies is not the reader here. I follow Ancient Aliens...and I never heard "Anunnaki" pronounced as "AnooooniKee"...that's how it sounds when he says it. It took me a long while to get past that with the Earth Chronicles. There are other names that are pronounced differently also, but that one is a big deal. So, when I listened to the sample of "The Lost Book of Enki: Memoirs and Prophecies of an Extraterrestrial God" I was simply pleased that the reading seemed clearer. Micha has a "down grade tone" in most of what he says. His reading doesn't come across as a conversation as Davies does. Almost each sentence has a steady pitch change at the end, and at the end is most sentences it "goes down" or "falls down". I doubt he sounds like that in person. Stephen doesn't do that. Stephen is also not to "breathy" at the end of each sentence.

I have a very challenging time with reading, all my life, I adore the odor of books and the sounds of turning pages..and that you may read them without electricity but I become tired after 30 seconds..and about a minute in, I start to become very tired. Any book..doesn't matter my interest. It doesn't stop me from reading, but does make the process very slow. Which is okay. Audobooks, are very helpful. I listen very carefully and I hear nuances. Some I can let go of, some I become okay with. But Micha's style is...very challenging. I've heard him "live" and he doesn't sound the same as reading this book.

My desire is that Tantor sees this and hires another reader. I can now even accept Stephen again., hahaha. Nothing against them as people, but listening to Audiobooks, voice and the complexity of how matters to us listeners. Santino Fontana (Narrator) of Stephen King's "The Institute" would be a wonderful choice - I think.

I adore this book a great deal. It answers questions the Bible fails at, and you can see/hear where the edits of the Bible stole their information from. You also learn the challenges of "making" humans, and this makes much more sense where the Bible again is incomplete. As I looked around the World from age 5 to 50-something, I know the Bible isn't "The Word", you can see it all around as you look. When I first head of the Cuneiform Tablets I knew I wanted to understand them. My Grandmother read the Bible to me a lot when I was smaller. I questioned it all the way..but most of my questions remained inside because I hadn't acclimated to English enough yet.

I got so many "Electrical Vibes" of validations as I read this book from what Enki, Enlil, and Ninharsag left, that this books..to me, kicks butt over the rest of the the Earth Chronicles. Not to negate those books, not at all.. They offer great details of creation, and lineage. But this one..goes to the point of deeper Why's and How's. Personally, I'd say get rid of the Bible and stick with this and the Earth Chronicles since you get a complete understanding, much better than the Bible does with its incomplete stories.

If there isn't anything that comes of a new reading of this book, I AM glad it is now here for others to listen to. Not everyone has the sensitivities to voice vibrations as I do.

Great Appreciation to Zecharia and his partners for the deep research and decoding and logical connections. I don't consider this book to be "perfect" because nothing and no one is, or has been perfect, but it's greatly put together.

this is a MUST READ for those who think outside The Box, and it doesn't change ones concept of there being a God, it Further Proves that there Truly is a PRIME CREATOR OF ALL!!! Even for The Anunakki , After all if we were created by another Lifeform, Then we must ask who created them that created us? And this Subject is touched upon more than once, though Somewhat Vague in Description, But as for filling in The blanks of The Traditional Bible, I must admit it does so and Very well I must say, It is Either Undeniable Truth because of the fact that the parallels in this book are Shockingly similar to many concepts of the bible , almost as if they were lifted from these cuneiform tablets and written as The old testament??? Food for thought!!! The only part that it leaves out is any mention of Jesus, But this information if it is all Sincerely true would make total sense since all the information and knowledge contained in this narrative predates The coming of The Messiah by many shars or ( Hundreds of thousands of years ) approximately, but to be totally Honest once I Started listening to it, I could not stop until it was totally finished and that for me is an accomplishment yet to be achieved by the works of Any other author or Book , The only other book that came close in regards to the previously stated criteria and That also filled in MANY Blanks and contradictions in the traditional Bible was for me The Book of Jasher. With that being said , as before if you think outside the box , and study abrahamian religion this is a MUST READ!!!

Bible stories make sense in light of this epic story.

A fun book that takes all those bible quirks that don’t make a coherent sense, and make the stories gel exactly right.

A most interesting book. I had to read it twice because I wasn’t used to the inverted sentences. But that’s probably how the Anunnaki spoke. I really enjoyed it the second time. I have always considered our main stream history taught in schools to be fragmented and flawed. This is how I personally expected it to be. I will reflect on this book for some time. Thank you to all those who have contributed to its writing.

Eye opening and believable documentation of the history of our creation. and evolution. A sadness, the unbalance of technology and wisdom. only compounded greed of power.

I Had High Hopes For This Book...

The writing style is very strange. Perhaps it is a relatively direct translation of the tablets, but it's agony to listen to. And, I imagine it was agony for the artist who read the book, doing a good job with difficult material. It was difficult to get into a flow with this book. I should have spent my money on a better book.

Great history lesson not taught but should.

all my questions have been answered. I now know what I've been seeking. seeking I no longer search. for the past has been revealed.

I love this story it was so epic it would make an amazing film. And it really opened my eyes to the reality of our planet. Just crazy crazy. But I wish it wasn't read by the Moviefone guy.. Although I have to say he made it sound pretty epic

As a psychic, the information therein is in alignment with what my spirit guides have shared with me on the creation of humans. Religion was established to honor these beings in order for there wellbeing, not ours. This book refers to the creator of all beings and therefore acknowledges that these beings, although mighty, are Not the true God. They are the God that is referred to in the Bible, not the true God.