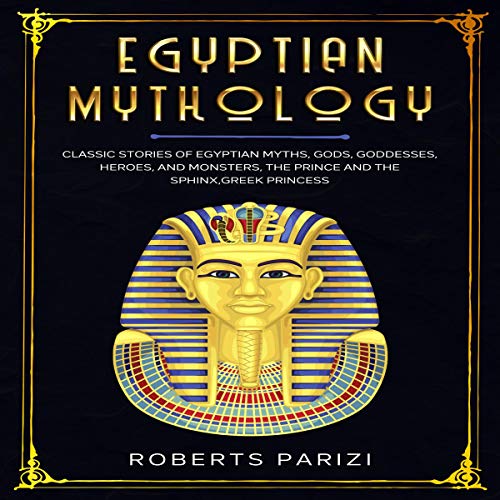 By: Roberts Parizi
Narrated by: John Hopkinson
Try for £0.00

Would you like to learn how Egyptians believed the world was created?

Are you interested in learning about Egyptian gods and goddesses and the role they play in the universe?

If you answered yes to any of the questions, then you are going to want to continue reading.

Egyptian mythology is made of stories and beliefs that come from ancient Egypt. It describes the actions of the gods and goddesses as a way to understand the world. The beliefs of these stories played an important role in ancient Egyptian religion. These myths can be frequently seen in Egyptian art and writing, especially in short stories and religious material. Most of the time these sources only contain a brief fragment of the myth.

Ancient Egyptians were inspired by the cycle of nature. Their earliest versions of time were seen as linear, and their myths are set in this type of time. The myths set the pattern of time cycles that are now used. Egyptian myths are fascinating to learn about and some of the most common stories to hear about are the ones involving Ra, Osiris, Isis, Horus, and Set. There are also recurring themes within the myths. This audiobook is here to teach you about some of the most and important interesting things of Egyptian mythology.

In this audiobook you will learn about:

Just like with any other mythology, the details of these events differ greatly from one to the next. There are some that even comes off as contradictory. That means there is a chance that you may have heard one of these stories before, but this version is different than what you are used to. It doesn’t mean one is wrong. This is just what happens after stories have been told from centuries and translated many times. To that end, the develop of the Egyptian myths are hard to trace as well, but we’ve done the best we can. You will learn something new and amazing in this audiobook.

The majority of Egyptian myths are metaphorical and look to translate the actions and essence of deities into terms that humans can understand. You will also come to learn that a lot of their stories and beliefs revolve around the Nile.

This mythology had a profound impact on the Egyptian culture. It has influenced and inspired several religious rituals and gave them the basis for kingship. Throughout Egypt symbols and scenes from their myths appear in amulets, temples, and tombs. The Egyptian mythology can serve a wide variety of purposes.

Whether you are want to learn something new or you are just looking for something entertaining to listen to, this audiobook has what you are looking for. Don’t wait any longer. All you need to do is buy it today!

What listeners say about Egyptian Mythology