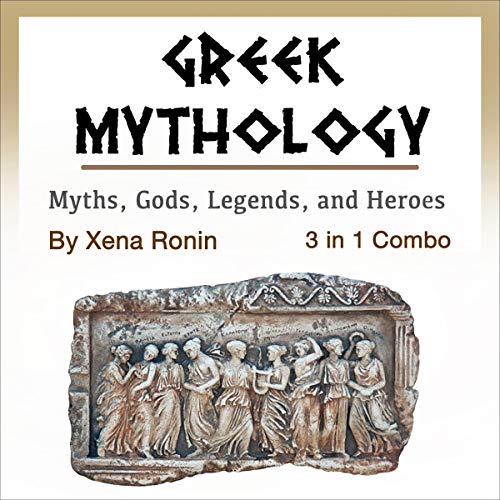 By: Xena Ronin
Narrated by: David Pickering
Try for £0.00

This bundle of books takes you to every corner of Greek mythology. It ranges from gods to drama. It covers legendary heroes like Heracles and Oedipus, and it sheds light on the dark side of the epic saga of these made-up creatures, gods, and historical men and women.

Do you know a lot about the Greek or Roman gods and goddesses? Yes, then a lot of this will sound familiar. No? Then this is a perfect guide for you.

In this book, many of the creatures and deities from Greek myths will be laid out, including their roles, powers, responsibilities, relationships, and background.

You will have a perfect image of the basics of Greek mythology, and you will understand the interaction between the gods and goddesses on Mount Olympus. Deities such as Uranus, Chronus, Zeus, Hephaestus, Poseidon, Helios, Apollo, Mars, and Aphrodite will be discussed in this extensive guide.

As we explore the ancient deities from Greece (also copied and somewhat altered by the Romans), we can find many fascinating stories and dramatic characteristics in them.

Aside from looking at gods like Mercury and Hades, we will also look at stories that involve Eros (or Cupid), Psyche (the origin of a lot of our words in the dictionary), and the infamous and seductive nymphs and satyrs.

At the end of the book, more background information will be given about how the Greeks and Romans worshipped these gods and goddesses, as well as how they celebrated certain events and traditions.

This collection of legendary stories and heroes contains mythological creatures, monsters, and gods. It has all the details of Perseus, Ion, Heracles, Achilles, and other brave figures who faced seductions, treason, danger, and mortal threats. Wars and battles have been laid out in this extensive guide.

If you are into epic heroes from the Greek mythology era, then this book is for you. You will learn all about those figures you may have seen on TV or read about in literature. It is a comprehensive overview with the most important elements of each of these protagonists.

I highly recommend this.

The narration was excellent. The narrator was clear and smooth, and he captured the essence of the material and its mythical source.

Happy to have this.

Well done. The basic gist of this audiobook is that it is a fictionalization of some of the classic Greek myths. The pace, tone, and dialogue is modernized without taking away from the heart of the myths. While the characters might use anachronistic speech or terms, none of the immersion is spoiled. In fact, everything is much more relatable.

I highly recommend this audiobook.

Excellent narration, extremely well fleshed out stories that bring the characters to life. magical, and easily one of my new favorites.

I can't get enough of the stories, and I listen both in my drive and at home. The stories were easily understood by the author, and David's narration provided the stories a unique touch! Really Amazing

I'm very impressed with this book.

I loved it. It wasn't that hard to finish. Too many moments to remember. I'd also like to say I enjoy David's voice.

There will never be a collection that contains every Greek myth, but this one is very sizable. The narration is also excellent, Highly recommended.

I wanted to say a thing about this audio book...

I wanted to say a thing about this audio book, and so I am putting in the time to write a customer review. I strongly recommend this audio book for several reasons. I think the first number of pages were my favorite ones, since the entire principle that the title describes, is explained. All the fundamentals are there. Later in the book, more depth gets included, and I believe this is what makes it so great.

I tuned in to this audiobook, and it was...

I tuned in to this audiobook, and it was absolutely inspiring. I was truly blown away by this book. There were so many points in this book that I didn't understand until now. I am thankful I discovered it. It was worth my time, especially since I listened to it while I was driving to my job.

My compliments to the author and the storyteller.

My compliments to the author and the storyteller. I urge you (as well as any person who reads this) to get this audio book. I loved it. I recognized a lot of the things the writer was speaking about. Some things discussed my head, but that's normal for any book that has been composed by a genius.

Both the narrator and the author put some real work into this. You won't lament purchasing this book. It gives you what it says it does. Let me think for a minute ... how should I say this? It was professional, straightforward, and easy to understand. With that being stated, yup, I do highly recommend the audiobook. No doubt about it.