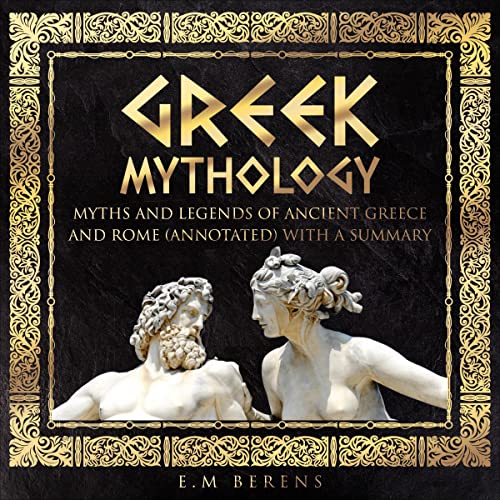 Learn about the origin of the world through these timeless Greek myths.

Greek Mythology is one of the most popular of mythologies. The creativity and imagination of the Greek has lingered through time and inspired as well as influenced many of the heroes of nowadays Western fiction.

With their fascinating tales of adventure, catastrophe, and victory, the Greek myths have captivated endless generations of listeners around the world.

E.M. Berens was a Greek and Roman mythology researcher and author who published over a half-dozen volumes. While most classics researchers of his day focused solely on investigating the history of ancient religions, Berens created stories that were both entertaining and educational, delving into the myths and other oral traditions of ancient cultures.

This book was first published in 1880 and is a comprehensive and approachable reference to some of the finest myths ever recorded, appropriate for casual browsers and folklore fans alike.

Here is a look at the chapters inside:

The audiobook narration of Drew complements the Greek Mythology story telling very well. You will find yourself thinking you are living and experiencing these old tales in real time.

No time to waste, buy it now, and immerse yourself into the great and timeless myths of Rome and Greece!

I enjoyed the narration of Drew Kallen-Keck

I do enjoy Greek Mythology . The first half of the book focuses on the gods and their origin. The second half tells the tale of some of the more familiar myths like Jason and the Argonauts, Troy and Helen.

The audiobook is for people with no previous exposure to Greek mythology, and is great to give them a solid foundation upon which they can build on.

Most of the major deities and heroes are covered. The author uses the more commonly known versions of the myths so some more obscure details and variations are omitted.

The narrator does a very good job. Some slight mispronunciations of names, really obvious for a native Greek speaker, but won’t deter anyone else.

Overall, a very enjoyable book for someone who wants to explore the rich Greek mythology

well researched and read. I loved it, the descriptions of the gods etc was indepth and informative. I would recommend this to anyone interested in mythology.

I have always been a big fan of Greek Mythology. This book is a good starting point for those interested in learning more about the Greek pantheon. The first half of the book focuses on the gods and their origin. The second half tells the tale of some of the more familiar myths like Jason and the Argonauts. The book is very well narrated.

It was very informative but extremely dry and right to the point, at times hard to listen to but I did it haha I did learn a few things but at the cost of great boredom, felt like death by PowerPoint

This book is so well written and narrated with so much history behind the Greek mythology! I was able to learn so many new things. The summary was so concise and easy to follow.

This is a great compilation of Greek Mythology stories. Some were new to me and others were not. There were some issues with the audio quality. There were quite a few places where you could tell that there had been some editing because there were differences in the ambient noise and tone of the voice. Even with those issues, it was still an enjoyable listen.

I was given this free review copy audiobook at my request and I have voluntarily left this review.

I really enjoyed this overview of Greek gods and myths. It's a big topic, so even the 10 hour length of this volume isn't enough to provide extensive detail, but all the major gods, demi-gods and heroes get at least a mention while some, like Hercules, get a fairly thorough treatment.
This is a great way to establish at least a basic knowledge of one of the most colourful and interesting pantheons ever imagined and I heartily recommend it to anyone with an interest in mythology.

I really enjoyed this audiobook and found it very informative. I liked that it went in depth with many of the inter-relationships in Greek mythology. It covers a lot of the minor characters and stories - characters I've heard of, but never really knew much about.

A very complete reading of myths. I had no idea that the myths had dynasties and an actual evolution.

It ties in the myths with the modern knowledge of the statues we have in museums and how they came to be and how they effected such things as the writings in the Bible and other religions and modern holidays.

A very thorough understanding of just how far flung these old myths show up in modern languages and celebrations, even what flowers mean and often show up at different holidays.

Yes, parts of it can be dry, especially the first part before it gets into the actual myths. Just persevere or skip that part and go back to it later, it is really worth listening to to get a thorough understanding at the end.