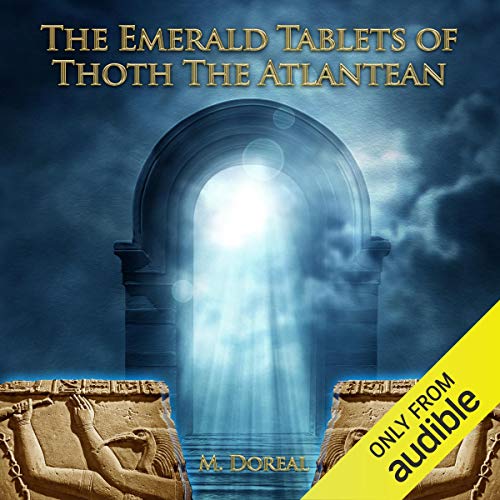 The Emerald Tablets of Thoth the Atlantean

The history of the tablets translated in the following book is strange and beyond the belief of modern scientists. Their antiquity is stupendous, dating back some 36,000 years.

The writer is Thoth, an Atlantean Priest-King, who founded a colony in ancient Egypt after the sinking of the mother country. He was the builder of the Great Pyramid of Giza, erroneously attributed to Cheops. In it he incorporated his knowledge of the ancient wisdom and also securely secreted records and instruments of ancient Atlantis.

What listeners say about The Emerald Tablets of Thoth the Atlantean

A way into the light

A form of wisdom and power for those that seek it. But you can only understand it if you have enough wisdom and research of your own.

The wisdom of life and purpose

The most enlightening thought provoking and purposeful book I have ever come across. A must for all that seek the truth and wisdom of life.
thank you

the text is filled with the same words over and over again . it seems as if Toth did not have other words in mind than dweller , children of men , veil , and the typical jargon used in bad heroic fatntasy movies . I figure Toth the great was not a good writer , or maybe thus version is pure fantasy and written by the worst writer ever

Every holy book all rolled into one minus the lies

Soo much knowledge and wisdom. So happy I can decode this so easily the more I read it I get different interpretations. Thank you Thoth!

I listen to this over and over so it was a good purchase for me.

brilliant ancient knowledge. Each time you learn new things. As you grow new connections form like a jigsaw

I listen to a lot of audible books and this is the first that I have found to be totally unlistenable - a combination of the reading style and a tediously written puffy text.

Enjoyed every bit and learnt alot too. It has opened my eyes 😊. I would recommend it to anyone who loves to learn about thoth (Tehuti)

Loved it what the tablets say are what we will all

experience. The more that believe the closer we will come to the truth we all are one

I listen to this book almost every night for the Activations contained within. A must have for those on the Path of Light...!

if you are looking for a translation of the Emerald Tablets, this isn't it. Don't waste your time

If you already know a lot about spirituality, this is a great addition. Understanding chakras and energy is also good to know. Its a valuable way to expand your spiritual thoughts with a strong base.

Starseeds will love this energetic transmission!

Fully worth buying if you are seeking wisdom and knowledge from Thoth the Atlantean. Listen to it almost like a guided meditation, to allow the transmission to occur. Don't try and understand every word with your conscious mind, just allow it to sink in.

much-hyped but only containing a a few new ideas.

I'm someone who is transitioning more towards books and audio books, because I have to drive for work, and away from YouTube conspiracy and occult videos.

It certainly seems like the Jesus Christ story is derivative this story.

Towards the end I heard what seemed like a prophecy saying that one day lightning will be channelled and then great Wars will come which result in the elimination of half of the Earth's population at which time Gough will return to manage his kingdom here on Earth.

There also was some interesting health advice about sleeping with your head towards the North or South Pole and focusing on your upper and lower magnetic body system for health.

It's good! A combination of the book of Revelation. And the mumbling's of Jim Morrison, on a whiskey fueled acid trip!

For The Seekers Of Light!

This 36,000 year old collection of letters is an essential to true open minded seekers of Light and Wisdom of The Universal Kind.
The Truths and concepts within were the Inspiration for many religions we know of today!
The Tablets Of Thoth are beyond even this day and age when it comes to scientific understanding of reality.
The Rules and Structure of the Holographic Game we are all a part of.
The Universe is Full of Life, Trillions of Planets revolve the Central Sun, Source of All.
The Grand Magnet.
This audio book is priceless.
I have read many times before but listening to the audio is something special.
Imagine it as Thoth himself speaking to you.
WARNING!
Only Read if You Really Want to Know!
WARNING!
Keep this knowledge a secret.
P.S. JESUS IS REAL!

If you can catch the vibe, catch it.

Thoth takes me through a 3 hour however long this is, guided metitation to the fall and rise of Atlantis, the origins of the spiritual aliens who supposedly set this world into motion, yet still continue their search for knowledge despite being like, way ahead of us. There was a quote that I liked, “ their discovery of knowledge only made their (spiritual) journey longer”. Or something along those lines.
Anyways, this book Is kind of comforting. Some of the things Thoth said, made me laugh, not because he was trying to be funny, but because I think it made me happy to hear it. I hope this book brings you giggles and peace of mind.

The Book of Mormon makes as much sense

As a long-time student of Egypt and ancient history, this was tempting. However, made-up shit is just that, like the Book of Morons and flat-earth lizard people hollow earth nut-cases. I wished they could explore into and under the Giza monuments, but until Zahi Hawass is removed as a criminal impediment to research no actual evidence will be forthcoming. There are unknowns, miracles and mysteries beyond current dogma, but this hash of supposed wisdom is just a waste and distraction. Start digging and allow research and we might actually find something. Then contact me for a full apology for the above, IF we actually find the tablets or Thoth's spaceship.

The book I wanted has all 15 chapters, this one only has 13. So this rating has more to do with my disappointment.