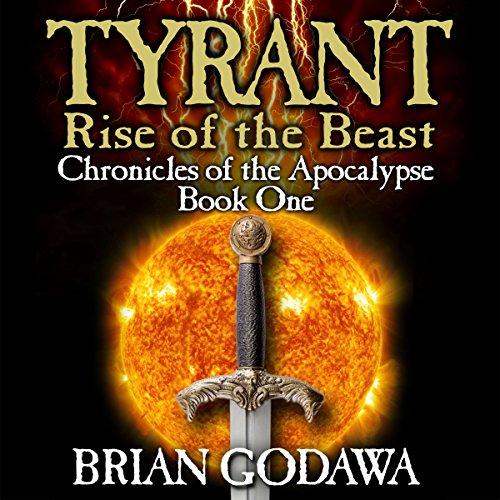 Tyrant: Rise of the Beast

The Origin Story of the Book of Revelation

What in the world was going on when John had his visions of apocalypse?

Ancient Rome, AD 64. Alexander, a Jewish doctor loyal to Rome, has his life turned upside down when the evil emperor Nero Caesar launches a horrific persecution of Christians.

When Nero discovers that an apostle has written a secret apocalypse about the end of the world, he orders a Roman warrior to hunt down the scroll, destroy it, and kill the author.

But a bold Christian woman named Cassandra holds a dark secret that opens the door to a world of spiritual warfare they’re not ready to face.

It will lead them to the holy city of Jerusalem and to the true meaning of the apocalypse.

It will change their world forever. And yours.

Tyrant: Rise of the Beast is Book 1 in the shocking controversial series Chronicles of the Apocalypse. It’s an edge-of-your-seat action-packed supernatural epic, written by Brian Godawa, respected Christian and best-selling Biblical author.

The human story is not the only one in the book of Revelation or in this series. Chronicles of the Apocalypse shows the evil plans of Satan and his fallen angels the Watchers masquerading as gods of the nations at war. This gang of demons is not going down easily.

Extra bonus: Historical and Biblical Facts Behind the Fiction

When you buy this audiobook, you’ll get a PDF attachment of more than 100 pages of endnotes tied to the chapters.

What listeners say about Tyrant: Rise of the Beast

I loved it, wished it didn't end. Most memorable was Gabriel appearance to cassandraon the way to Ephesus

I have long pondered just how the end would come. I know this is fiction, , but it introduces and interesting take on things. love the characters as well.

I like the story line. However I would have preferred a more conclusive ending. It left me hanging.

An Imaginative Take On Biblical Truth

If you liked Mr. Godawa's previous series, you'll love this one. I appreciate the historical research that went into this book and the rest of the books of the Apocalypse series. While some plots threads are a bit predictable, they're still enjoyable. I would caution parents on getting these books for younger children who love to read, there's some graphic violence and some sexual activity, but Mr. Godawa does a good job at using the depravity as a way to showcase God's grace, mercy, justice, and sovereignty. While reading about the persecution of the Christians during the reign of the Caesers I was constantly reminded, "this is your inheritance, this is your family linage," it's a solid reminder that the Gates of Hell will not prevail against the Church.

Again! he's done it. Netflix needs to hire this guy and turn ALL OF HIS NOVELS INTO TV SERIES!

Rise of the Beast

I found the story intriguing as the author unravels Revelation from a preterist perspective. I appreciated it as I grew up with a dispensational view and am increasingly finding room to question that viewpoint. Not quite there though. I also appreciate his other audible books explaining his research. I think this is excellent. I also appreciate the fact that the author took the time to narrate his story - not to mention attempting to use multiple voices in line with his characters! I will say he needs to work on his feminine side though....just kidding. As someone who has attempted/attempting to engage story telling from a Christian perspective I can appreciate the author’s use of some artistic license - something that is not necessarily easy to do with Christian literature (at least my attempts!) I look forward to the rest of the series as well as his others. Makes my 0430 treadmill endeavors less daunting at my age!

Not reflective of previous books

First, let me say that I love this author, have re-read most of his books and anxiously await his new releases.

This book was a disappointment all the way up until the last 3 hours. Everything before that was long, boring, and easily forgotten.

I hope the next installment is better!

Great fiction novel and interesting handling of Revelation judgements. Well worth your time and money.

Awesome. Another classic by Brian Godawa. A good eye opener for one of the most misunderstood books in the Bible.
The only small section I did not particularly care for was Godawa's presentation of the 3 angel's attempt to capture Appollion before his decent to Tartarus. Godawa showed 2 of the 3 angels engaged in their silly rivalry and inattentive and that was part cause of them not capturing him. I could not wrap my mind around the fact that the evil one was stronger, swifter and far more focused than God's angels. But the book was an absolute classic; can't wait until Remnant comes to Audio books. Godawa is such an awesome narrator Great job!

Thank you for making the Bible more understandable through your story telling. I loved it!

I'm not typically one to read Christian fiction, but after buying some of Brian's non fiction works and enjoying them immensely, I decided to give this series a try, and I'm so glad I did.

Reading it felt like stepping back in time to the years immediately following the resurrection from the perspective of those living (and dying) for the cause of Christ, as well as unseen realm of angels, both holy and unholy. Not to mention, he's an excellent narrator as well, and I highly recommend giving these books a try.

This book was soooo boring. I kept waiting for the story line to pick up and become interesting but it never did. If you're a Christian and believe that the rapture and the antichrist is future events then you won't like this book. According to the author, it's already happened with Nero and the persecution of the first Christians. There was more history and background that was focused on than the story plot itself which often times nearly put me to sleep. It was like reading a dictionary at 2 in the morning. He spent more time trying to get the reader to believe his viewpoint on biblical prophecies instead of focusing on the story which was a huge turn off. This was my first and last book that I will ever read by this author.

The eschatology is important.

From the beginning of the definition of “Myth, mythology” to the subtle differences between narrative liberty and fiction; this was an eye opening experience. Thx.