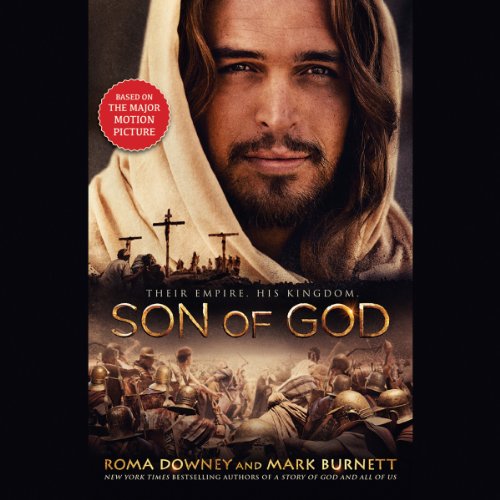 By: Roma Downey,Mark Burnett
Narrated by: Keith David
Try for £0.00

The book Son of God is a tie-in with the major motion picture of the same title, slated for wide theatrical release (through 20th-Century Fox) on February 28, 2014. Like the movie, the audiobook possesses an epic scope, providing a panoramic picture of first-century Judea as it recounts the events and reveals the meaning of Jesus's life, death, and resurrection.

Though based on New Testament accounts, including the four Gospels as well as the book of Acts, Son of God reads like a contemporary novel, delving deeply into the character of Jesus and the personalities and motives all of those who surround him, both his followers and his enemies. Even minor Gospel characters (Mary Magdelene, the servant Malchus, the Jewish elder Nicodemus) come vividly to life in the book, and its portrayal of the political machinations behind Jesus's trial and death-the contest for power between the Roman governor Pontius Pilate and the high priest Caiaphas - is especially engaging.

Beyond depicting the historical milieu in which Jesus lived, Son of God deftly explains the customs and culture of the Jewish people and the Roman officials and soldiers who oppress them, enhancing readers' understanding of the biblical record.

In its final part, the book extends the Christian story past Jesus's resurrection to show how Jesus's followers, impassioned by their faith, began spreading his message of salvation throughout the wider world. Grittily realistic, Son of God pulls no punches in conveying the harsh realities of Jesus's era. But it is also inspirational, showing how Jesus transformed the lives of the humble and the powerful alike - and conveying Jesus's message of comfort and hope to present-day readers.

What listeners say about Son of God

Was really looking forward to listening to this story. And most of it was okay, some good but some bits so annoying I had to keep stopping it.
Parts of the story have been dramatised really well but as main parts differ from scripture it had to have few stars.

What did you love best about Son of God?

the Whole book . the story of JESUS and how he did for OUR sins is AMAZING

But really why would you Even think about adding at the end that this Book that it Is Fictitious??
This book is the truth and the Stories of Jesus are TRUE

The retelling of the Life of Christ was great. As a believer, it's always good to be reminded of the Price He paid for our Salvation. The narrator made this version very enjoyable too.

The Word comes to life

Love it. what a great read!!! This is a book you can share with your whole family and have discussions about.