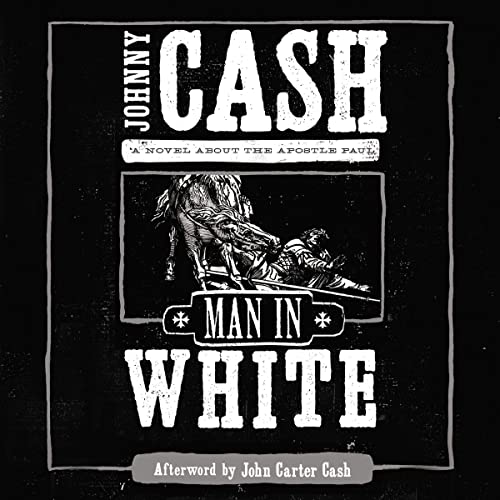 By: Johnny Cash
Narrated by: Webb Wilder
Try for £0.00

The only novel written by the legendary songwriter and performer, Johnny Cash—the incredible story of the apostle Paul.

In this historical novel about the life of Paul before and after his conversion, discover the passionate, fiery, and destructive man once known as Saul of Tarsus. Paul's encounter with Jesus, the Man in White, knocked him to the ground and struck him blind. It also turned him into one of the most influential men in history.

Praise for Man in White:

“[Johnny did] extensive research and study of the life of the apostle Paul, and amazed [me] as he talked about Paul and we shared the Scriptures together. When [Man in White] was first published several years ago, my wife and I both read it—then read it again!” —Billy Graham

What listeners say about Man in White

I'm perplexed because of how much I love this stor

An unbelievable novel from singer-songwriter Johnny Cash.
Christian Literature has been shrouded by secular literature.
Yet secular literature has many times emulated Christian literature.
The King of King's sends His divine light to inspire the best writings this foot-stall has ever scene.
Groundbreaking work here.
I slowed down the pace of the narrator on this audio recording. Cash had a slow and melodic way of speaking. The narrator here tends to rush and has little sense of timing and sounding. Yet slowed down he almost sounds like Cash.

After heart about this book from Greg Laurie’s biography about Johnny Cash: the Redemption... I had to read/listen to it and was I blown away 👍🏼👍🏼

Wow! What an exceptional account of the apostle Paul. Johnny Cash’s engaging story vividly brought this bit of history to life. Highly recommend!

Even though this was a novel, it stayed true to the life of the apostle Paul. Very well written and highly recommended.

I really enjoyed the story. The narrator did well, though sometimes failed to pause between sentences. Not too bothersome.

Johnny did his homework

Only wish was that The Man in Black recorded it himself. I loved it though.