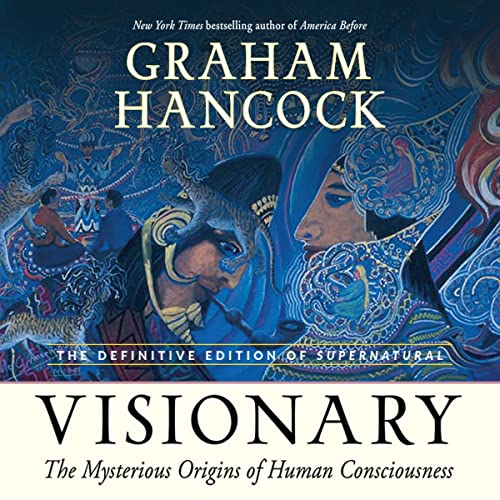 "With the original unabridged text of Supernatural, I offer the reader an investigation that explores the human experience with psychedelics from the Stone Age to the Space Age and the role of these extraordinary plant medicines as tools to investigate the nature of reality itself." (Graham Hancock)

Discover the pathway to the gods.

Less than 50,000 years ago mankind had no art, no religion, no sophisticated symbolism, no innovative thinking. Then, in a dramatic and electrifying change, described by scientists as "the greatest riddle in human history," all the skills and qualities that we value most highly in ourselves appeared already fully formed, as though bestowed on us by hidden powers.

In Visionary, Graham Hancock sets out to investigate this mysterious "before-and-after moment" and to discover the truth about the influences that gave birth to modern human mind. His quest takes him on a journey of adventure and detection from the stunningly beautiful painted caves of prehistoric France, Spain, and Italy to remote rock shelters in the mountains of South Africa, where he finds a treasure trove of extraordinary Stone Age art.

Hancock uncovers clues that lead him to travel to the depths of the Amazon rainforest to drink the powerful plant hallucinogen ayahuasca with Indian shamans, whose paintings contain images of "supernatural beings" identical to the animal-human hybrids depicted in prehistoric caves and rock shelters. Hallucinogens such as mescaline also produce visionary encounters with exactly the same beings. Scientists at the cutting edge of consciousness research have begun to consider the possibility that such hallucinations may be real perceptions of other "dimensions."

Could the "supernaturals" first depicted in the painted caves and rock shelters be the ancient teachers of mankind? Could it be that human evolution is not just the "blind," "meaningless" process that Darwin identified, but something more purposive and intelligent, something that we have barely even begun to understand?

Previously published as Supernatural, this definitive edition includes a new Introduction by Graham Hancock as well as restored chapters that were omitted from the original paperback release.

What listeners say about Visionary

im a fan of graham's work and i love to see his view on reality, this book is definitely a bit of a mind bender and i have to objectives say i think Graham at times sees what he wants to see when offering his evidence. but he makes some excellent points and definitely gives you some things to think about.

Hancock lays out very clearly the potential origins of altered states of consciousness and it’s linked to, potentially the some of the most important discoveries about human history, the human genome and the potential for where our race could be, should we choose a more enlightened and peaceful path for ourselves. A fantastically well researched body of work.

if you ever wondered.... here's plenty of answers

fantastic listen... Graham knows his stuff..really enjoyed the bit size chapters.. there is a large amount of information to absorb and will take a few listens to glean what i need.. so in we go again👍🏼👌🏽

Anthem of the underdog

Yet another wonderful and fascinating book by Mr Hancock. Who continues to be verified with each passing year. Graham is arguably the most important journalist of our generation. I highly recommend this book and his earlier works. thank you, Graham

Graham Hancock is a truly talented researcher, written and thinker. The book is incredibly thought provoking, arguments are deeply reasoned. A flawless master work by one of the truly visionary thinkers of our modern age.

Must read. Amazing. Real eye opener. Graham Hancock thank you for such a good read

Tough but worthwhile listening for many reason.

Graham Hancock has tried to make this a challenge to academics in some areas and as such the wording is difficult and can satisfy neither audience. That apart it's a brilliant analysis.

Apologies if this now gets even stranger but I happen to first read The Messengers: Accounts of Owls, Goodness the links from this and the whole alien question make a fabulous and new tale.

Graham Hancock and his extensive research and reporting is as necessary as the pursuit of knowledge through rigid academic structures and perhaps even more so.
He presents a view of the subjects he covers free from institutional ego, shedding light into those spaces many dare not look. His results often reveal ignored or hidden knowledge that is essential for the betterment of our understanding of our origins and hence ourselves. .
I am so glad this work and other Graham Hancock works exist.
I am certain he is gently seeding a path upon which science and their tenuous academic feet will one day frequent.

Narration on point
So much fascinating information from start to finish!
I have been waiting got this book to hit audible and I was not disappointed
Brilliant thanks graham

So much better when read by the author.
Superb, interesting material, well researched, presented with nuance and counter nuances and suitably snuffed intantional misinformation.

It would be wonderful to hear yourself and some of the mentioned experts in the field, together being interviewed by someone like Joe Rogan.

A remarkable work which is highly educational to all who know that we and everything around us is more than we can see, hear, taste, smell and feel. Thank you for the bravery to put it out there and flow against the mainstream.

Graham Hancock is a fascinating mind, a fantastic researcher & a phenomenal narrator. Love everything about this book.

I love and appreciate all the labor and effort GH puts into his books. This rerelease was mind blowing. His books always leave me feeling more curious and more expanded than ever. From cave art to aliens to psychedelics, this book ties it all together in a way that will have you questioning how you perceive the world.

I love Graham Hancock's material and speaking manner. However, this book seemed a mishmash of a previous work. While there was a lot of interesting information about cave art, much of the book seemed an opinion piece on how others did or did not conduct personal research using psychedelics.

This book told a story of humankind connecting our ancient past to the present and future. It builds upon the evidence of facts and experience to synthesis theories that include all possibilities. It does an excellent job arriving the reader at a place where they may seriously consider alternate perspectives on reality to that thought possible at the beginning. If I am honest, it made me sit back and laugh at how oblivious we are as humans and how silly it is when we build rigid dogmatic views on reality. We have a record of history from only a fraction of our existence yet we are so disinterested and dismissive of our past/ancestors—it’s truly astonishing how little value or even thought we give to this as a whole.

If you can suspend your disbelief, you may really enjoy this audiobook. Graham is a marvelous storyteller and there's a sincerity in his voice as he narrates this book.

Could be true but missing scientific evidence

First of all, it’s wayyyyy too long. Could condense down to 5 hours or less. Interesting attempt to link hallucinations with UFO abduction stories, cave art, …….. he could be right, but the conclusions drawn were quite a stretch. All ‘evidence’ included were just ‘witness’ reports and 0 scientific support. The author made numerous interpretations of things that are no more than personal opinions, imagination and guesses. The logic used is similar to UFO abduction people.

So much information and yet interesting & intriguing! Now I want to read my DNA!

The future medical uses of DmT & other psilocybin’s

The book read By he author is a gripping tale of many illegal Class 1 drugs, whose use is discouraged by Big Pharma ( they can’t make huge profits by marketing naturally occurring substances. However there are many trials being conducted around the world by recognized labs and hospitals. The benefits appear to render help to “ drug addicts. At low cost and speed up the progress of drug withdrawals is a door which needs to be open wide so that a majority of people can not only gain insight into their addiction but present a “cure” for millions suffering from Mental illness! Graham Handcock is at the very front of this cure and treatment protocals to ease the pain of so many. Hancock is in the lead position and therefore a target of those wishing to invent a costly nonnatural pill. It’s money versus healing. Only time will provide an answer for the masses. The book is quite engaging and provides insight into the cash business of Big Phrama. Hook luc Graham… Steve in Tucson, Arizona!

Mr. Hancock’s theories are presented in a way that makes them seem very plausible. Lots to think about!