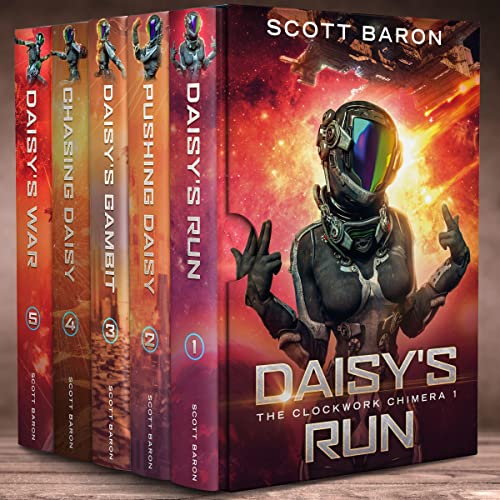 By: Scott Baron
Narrated by: Vivienne Leheny
Try for £0.00

Yanked from cryo to join a crew of modded humans in deep space? Daisy's life just got a whole lot more complicated.

As if nearly burning up in a freak accident on her way to Earth wasn't bad enough, Daisy had a whole mess of other trouble on her plate. Big trouble. And she was going to get to the bottom of it if it was the last thing she'd do, which it was starting to look like it very well might be.

The thing is, Daisy had a simple rule for space travel. Don't blow up, and so far she'd been managing to abide by that, but mere survival wasn't enough.

With the powerful AI supercomputer guiding the craft beginning to show some disconcerting quirks of its own, and its unsettling cyborg assistant nosing into her affairs, Daisy's unease was rapidly growing, as was her bigotry toward artificially intelligent beings. Add to the mix a crew of mechanically enhanced humans, any one of whom she suspected might not be what they seemed, and Daisy found herself with a sense of pending dread tickling the periphery of her mind.

Something was very much not right, she could feel it in her bones. The tricky part now was going to be overcoming her biases and figuring out what the threat was, before it could manifest from a mere sinking feeling in her gut into a potentially deadly reality. Only things were quite different and much worse than she could ever have imagined, forcing her to repeatedly adjust and overcome a reality that turned out to be far from what it had originally seemed. And it was looking like Daisy wouldn't have to save only herself, but the entire planet Earth in the process.

The complete series set of all five of the Clockwork Chimera books:

What listeners say about The Complete Clockwork Chimera Saga: Books 1-5

Relies on characters failing to communicate

If characters failing to communicate as the plot driver upsets you, steer clear.

It also doesn't do itself any favours by making the main character not just gifted in every way but also entirely bigoted for no apparent reason. It is suggested that it is caused by paranoia brought on by certain actions she takes which seemed for a while to be taking the plot in an interesting direction, where the other characters would have to manipulate her into fulfilling their goals, but when the big reveal for the first volume comes she is immediately forgiven for all her abusive and destructive behavior towards people who had shown nothing but love and kindness toward her.

For a supposedly intelligent main character she also is surprisingly dense. During the deneument she is shocked by things which were blindingly obvious. She seems completely unable to put two and two together unless she needs to do some technical wizardry to push the plot forward.

I confess I stopped listening at this point. Despite glimpses of something interesting, the reliance on these tropes and damaging characterising of the main character undermines any value I saw in this book.

Scott Baron has managed to write the least enjoyable piece of science fiction I have ever encountered. The character of Daisy is a rude, bigoted and arrogant woman who is a most jarring example of deus ex machina. Secondary characters are flat and dull, only there to allow Daisy to flit from one overwritten situation to the next. Baron seems desperate to demonstrate to his readers just how smart he is. The half references to more worthwhile works of science fiction constitue most of the attempts at humour that only reinforce Barons' seeming desperation to be funny. Credit where credit is due, the plot is interesting, but many more rounds of editing were needed. This saga is a victim of its author.

Terrible narration, but then I expected way too much after listening to space assassins first, narration was nailed in those books, great accents and enthusiasm, complete opposite with this title

I feel like the author does not know how to write plot or conflict that is not driven by people choosing not to communicate for no discernible reason. Even worse is when a character is loudly proclaiming their intent to share relevant information with their friends/allies while refusing to actually share said information.

I thought a five-book series for one credit was an incredible deal, but this is the first title I have returned from my library of over 200 titles.

pros are complex issues of self introspection and selfhood doubt

cons bodice ripper not my thing

Edit: This series has been so fun to listen to! I'm actually on my second listen! Protagonist Daisy is an amazing character. All of the characters are well developed.

I love this! I have finished Book 1. I couldn't stop listening, I usually try to make time for YouTube, but I seriously didn't want to stop listening. Can't wait to listen to the rest of the series.

This is Dawson’s Creak in space and Dawson hates the handicapped. I really tried to stick it out I just can’t.

Outside of a little bit of a slow start in book one this is one of the best sci-fi book series I’ve listened too.

This is an excellent series and amazing universe I enjoyed this one just as much as I did the dragon mage series.

I really liked the series. Good action with a twist. Check it out. It’s great!

I couldn’t finish it.

I read other books by Scott Baron and I thought I would like this one. I didn’t. I listened to the first book and barely got through it. The second book I just stopped. I couldn’t get past the fact that Daisy was a bigot. I was up that I couldn’t get my credit back. I really didn’t like this.

This is my first review after 200+ audio books.

I wanted to stop listening but could not leave a review till I had listened to a certain amount of the book. The characters had potential but the constant high school romance made this hard to listen to.
Ok it goes like this:
- plot
- straight to sex
- plot
- oh he’s so hot
- plot
- corny steam sex
- plot
- oh he so dreamy
- plot
- hey girl your best friend died want some of this

Pass on this book.

starts rough but gets better and is worth it.

The first book starts rough and dry.
problems and drama came from Daisy being ignorant of key facts. I found her irritating in the first book, but once the story starts picking up in book 2, she starts getting better. Continued secret keeping did feel annoying, though.