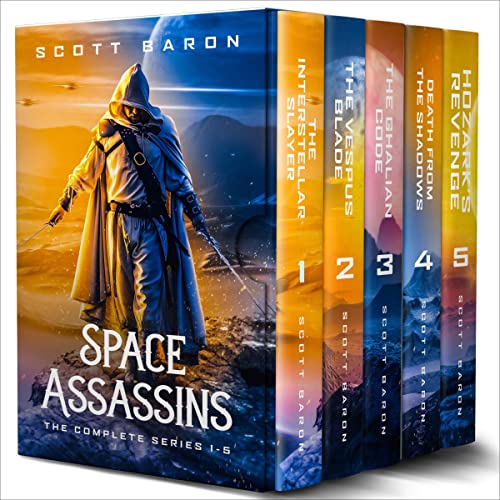 By: Scott Baron
Narrated by: Eric Bryan Moore
Try for £0.00

Sure, being one of the deadliest assassins in the galaxy had its perks, but even the mightiest warrior could have a bad day. In this case, it was looking to be enough of them to fill an entire calendar.

It seemed the unthinkable had happened. Someone had actually targeted the Ghalian, an order of assassins known and feared across the systems. It was madness. Only a fool would go after the likes of them. But, it seemed, the galaxy had no shortage of fools.

Retaliation most bloody was in order, and one man stood ready to spring into action. Hozark was his name, and he was no ordinary man. He was a Master Ghalian, an assassin skilled in the ways of death. Practical, mechanical, magical, to him it made no difference. One way or another, he would get to the bottom of the attack and turn the tables on whoever dared strike out at his brothers and sisters.

Or so he thought until someone quite unexpected reared their head. An appearance that gave him pause. Someone he had thought long dead. His former lover. A revelation like that could throw even a master assassin for a loop. That she too was an assassin only complicated things more.

There was far more at play than was apparent on the surface, and Hozark would require all of his wits and skill to get to the bottom of it. And he most surely intended to do just that, no matter how high the body count. He just hoped to do so before more of his kin fell victim to the nefarious plot.

A sci-fantasy adventure across space, with magic, starships, sword battles, treachery, deadly beasts, and, of course, a healthy dose of snark and sarcasm.

Great set of books with a romping storyline, great set of characters who are not overpowered, and good plot twists! Highly recommended!

Really good book , recommend with pleasure.
Will be really nice if we will have a movie after the book.

great series. love the storyline and the character development. the story moves smoothly and without any major plot holes. this is a steal in 1 credit.

Absolutely loved the storyline. I couldn't wait to go out walking my dog twice a day for over an hour to listen to this & also go out in my car on my own to have it on. lots of twists & turns, but I somehow knew that the co-piloy was a wrong-un from the beginning. I would thoroughly recommend this to avid sci-fi & fantasy lovers.

Bought this on a whim and so glad I did. Not my usual style but I loved the story. The narrator brought the whole thing to life with the different characters. Was sad to get to the end, wish it went on longer.

gripping, plenty of twists and turns.

struggled to begin with, but fell in love with the story, perfect ending. it had plenty of unexpected twists and turns and some obvious "surprises" that left me feeling good for guessing it before it came up in the plot.

it's like someone has fed every sci fi, fantasy book / trope into an AI and this abomination has spilled out.

A waste of my time, the writers time, and ultimately your time because you've had to read this review.

A great twist on some well used themes

A great adventure with characters you will get attached to using themes that otherwise have been over done but now have a new lease of life.

However, a little bit repetitive with history and explanations.

Overall though, Really enjoyed this series and hope there will be more to come.

great characters, story builds well, great twists and turns. couldn't stop listening to it. well worth it and a steal at one credit for the box set!

Awesome!!
Loved every second of these 5 books…
I sooooo hope Scott Baron will write more in this series, I need more!!!!
Also his series ‘the clockwork chimera’ is absolutely awesome too… and Scott if you are listening… I need more books on that series too!
Absolutely unputdownable!!!!
Best new worlds, best plots, best characters (and the narration in both are fantastic too!!)
Well all in all…. Simply the best books I’ve read in a really, really long time!!!
(One teeny tiny negative, I wish there wasn’t any swearing, normally, I stop reading/listening once the swearing starts but these books made me push past even that)
⭐️⭐️⭐️⭐️⭐️⭐️⭐️⭐️⭐️⭐️

“THE” plot twist can be seen coming from book 2 and its incredibly frustrating watching all the protagonists be so willfully blind to all the hints until it happens. As a reader, you get to “enjoy” the band bumble their way through 4 books of failures despite the solution being clearly obvious from book 2.

The prose is good and narration is good. The story itself and the characters’ intelligence is slam-head-into-wall levels of frustrating and the frustration drags on and on for 30+ hours.

The book starts out by explaining what's going on inside someone's head in excruciating detail, and then dives directly into an extremely mundane explanation of some random magic powers, and alien races, and magic user stuff..... I'm sorry, but I need to get hooked before you start explaining how amazing everything is about everything that's happening right now.....

The deadliest assassin's ever have the most clueless sidekicks??? You could probably do away with one of these books if you removed all the stupid comments made by them. I'd think this was for young adults if it wasn't so violent. oh well, I couldn't have written better so....

I really liked Eric Moore's style in storytelling and character adaptation. He was consistent throughout and very very easy to listen to. He really just made me feel like I was sitting around a couple of nights worth of campfires listening to this tale he took part in.
Scott Baron wrote an excellent story that is really enjoyable to hear. I imagine I also would have enjoyed reading this series and waiting on the next book to come out. To me it sort of is a mix of Assassins creed and Star wars with the force. Magic is pretty much the explanation for everything including space travel. It is like a sci-fi/action/fantasy you can easily follow and yearn for more. It is 44 hours long, but you can easily break it up into parts to get through the epic. Enjoyed!

I very much enjoyed this series. The combination of magic and space travel was very well done and interesting. The battles were not overly descriptive and logical. I appreciate a well written story.

Cool space fantasy series. There is an interesting mix of sci-fi and magic. The assassins well portrayed and compelling MCs. The story line of fun. The fact that this is a 5 book combo makes it a great value. The MC is really good.

So everything being run by magic was weird at first, and I had to listen to the first two chapters twice to be able to get into the feel of the first book. After that? I was hooked.

Excellent character build-up, use of tropes, and plot twists. I was able to sort-of-kind-of predict the ending, but even then the how and why had me pleasantly surprised because I had not predicted that.

Loving this series! Twists and turns keep the story moving without losing the fun details and world-building that really hold my interest. Now that I’ve invested a little time in getting to know the characters, it’s really going places. Adventurous folks are gonna enjoy.

this series,and all the attached books are fantastic, great listen or read.
my compliments to the author, and the narrators.