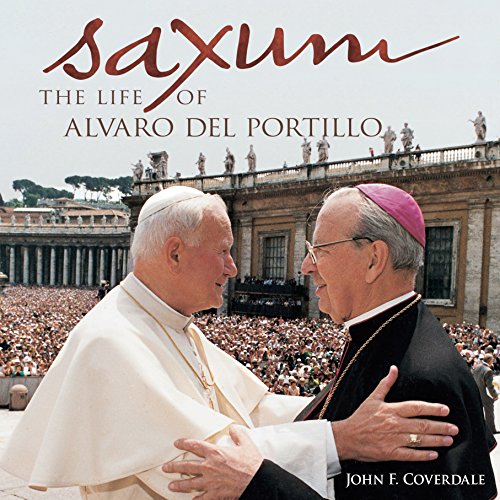 By: John F. Coverdale
Narrated by: Elliott Bales
Try for £0.00

Saxum - the Latin word means rock - is a term that St. Josemaria Escriva, founder of Opus Dei, sometimes used in letters to Alvaro del Portillo to describe him. Don Alvaro, as he came to be known, was for many years the founder's closest associate as well as his successor and first Prelate of Opus Dei after it became a personal prelature-a foundational rock for this dynamic international Catholic group devoted to promoting sanctity in ordinary life.

Written in anticipation of Bishop del Portillo's September 2014 beatification - his official recognition by the Church as "blessed" and a stage on the way to his possible canonization as a saint-the book is a fact-filled biography set against the background of historic events like the Spanish Civil War and Vatican Council II. It depicts a person of powerful integrity and conviction who set aside a promising engineering career to collaborate with the founder of Opus Dei. Don Alvaro emerges in these pages as a tower of strength, reliability, and good humor in the face of a host of threats and challenges that might well have defeated a lesser man.

John Coverdale, an attorney and historian, is the author of two other books detailing the early days of Opus Dei- Uncommon Faith, about St. Josemaria and his companions during and shortly after the civil war in Spain, and Putting Down Roots, about Father Joseph Muzquiz, along with Alvaro del Portillo one of Opus Dei's first priests, who played a key role in introducing it in the United States.

What listeners say about Saxum

A Saint Among Us

This special book captures the life, spirit and sanctity of this amazing and humble Spanish saint.

What an amazing witness. A man of extraordinary virtue, dedication to our Lord, Jesus the Christ, and His church.

The recording quality could be better, be advised, but 100% worth the listen.

Thank you for this book!

Excellent narration about a truly saintly man that lived all the virtues to a heroic degree. He like Our Father will inspire many generations to come.

Beautiful and inspiring life of a faithful hard-working priest
Quiet yet strong successor of St. Josemaria

The life of a true man of God and told exceedingly well.

A must read for all interested in finding holiness in everyday life.