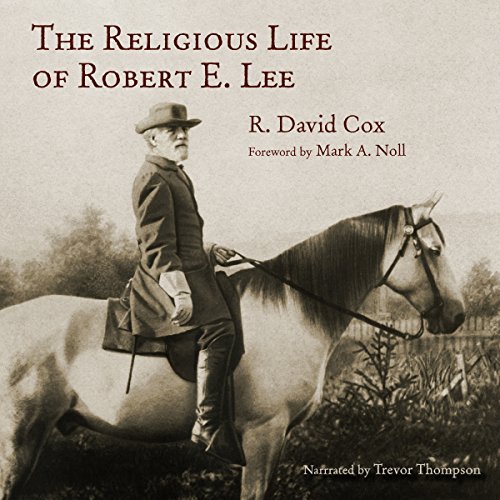 The first close examination of how Robert E. Lee's faith shaped his life

Robert E. Lee was many things - accomplished soldier, military engineer, college president, family man, agent of reconciliation, polarizing figure. He was also a person of deep Christian conviction. In this biography of the famous Civil War general, R. David Cox shows how Lee's Christian faith shaped his crucial role in some of the most pivotal events in American history.

Delving into family letters and other primary sources - some of them newly discovered - Cox traces the lifelong development of Lee's convictions and how they influenced his decisions to stand with Virginia against the Union and later to support reconciliation and reconstruction in the years after the Civil War. Faith was central to Lee's character, Cox argues - so central that it directed and redirected his life, especially in the aftermath of defeat.

What listeners say about The Religious Life of Robert E. Lee

A southern spiritual journey to the past

Let me start by saying that I completely understand why every review I have seen of this book is 5 stars; it is because it is well researched, superbly narrated, and wonderfully written. It hits every cylinder across the board.

The narrator, Trevor Thompson, is fantastic. My family listens to a lot of historical books while in the care, and his voice is soothing, but commands your attention. You will not get bored or drowsy listening to him. In fact, his inflection and pacing grip your attention. So, Bravo, good sir. A job well done, indeed.

The writing. It is not dry and does not simply spew facts. It is a visual narrative that paints a wonderful picture of the kind of man Lee was spiritually. You can tell this book was researched with a fine toothed comb, as it leaves nary a stone unturned. If I were still in college I would say this would make a fine research document, but since I'm not anymore, I will say that it is a perfect tool to quench my curiosityof the past. It is a wonderful addition to my civil war library. The text is verbose and scholarly, and yet my 12 year old and 10 year old follow along easily. This is a rare gem in which the book and the narrator mesh so perfectly that it is hard to believe that it wasn't a collaboration from the beginning.

Read this book if you like the civil war, are interested in southern Episcopalian practices, or just want to hear a riveting tale of years gone by, you will not be disappointed.

Beautiful narration of a complicated man.

What made the experience of listening to The Religious Life of Robert E. Lee the most enjoyable?

The narrator has an amazing voice. He could read the phone book and make it pleasant. Gorgeous voice.

What other book might you compare The Religious Life of Robert E. Lee to and why?

There were not "scenes" per se. I loved the chapters that focused on the war. Violence and theology are tragically fascinating.

Lee: A Man of His Time

This book is not a biography, but it is biographical. There were a couple of chapters that stepped back from the chronological look, and examined Lee's perspectives on specific topics.

Gives much insight into Lee’s thinking

I am joyed the book, which was thoroughly researched and provided a lot of insight into what made Robert Lee the person he was. Absorbing history and quite interesting. The reader did a fine job. I came away with a comprehensive view of Lee and his family. I found it inspiring that this man was so clearly devoted to his God, and became more and more so throughout his life. His spiritual life was exemplary, and his love for Jesus Christ was demonstrated regularly. He had great
Confidence in the goodness of God despite all the difficulties of life.

The Narrator was as wooden as the prose he read. A very
poor history work!

Gives a factual look at the faith of Robert E Lee. Good performance by the narrator.