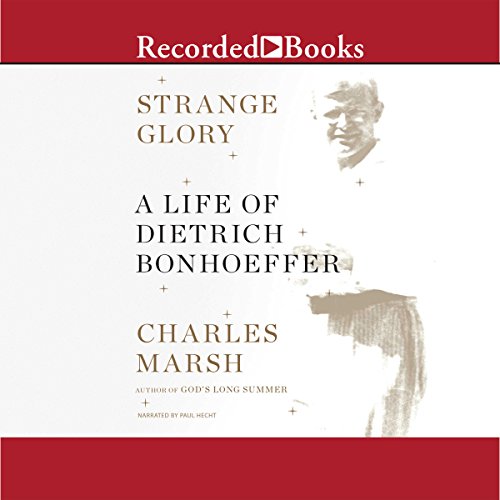 By: Charles Marsh
Narrated by: Paul Hecht
Try for £0.00

In the decades since his execution by the Nazis in 1945, Dietrich Bonhoeffer, the German pastor, theologian, and anti-Hitler conspirator, has become one of the most widely read and inspiring Christian thinkers of our time. Now, drawing on extensive new research, Strange Glory offers a definitive account, by turns majestic and intimate, of this modern icon.

The scion of a grand family that rarely went to church, Dietrich decided as a 13-year-old to become a theologian. By 21, the rather snobbish and awkward young man had already written a dissertation hailed by Karl Barth as a "theological miracle". But it was only the first step in a lifelong effort to recover an authentic and orthodox Christianity from the dilutions of liberal Protestantism and the modern idolatries of blood and nation - which forces had left the German church completely helpless against the onslaught of Nazism. From the start, Bonhoeffer insisted that the essence of Christianity was not its abstract precepts but the concrete reality of the shared life in Christ. In 1930, his search for that true fellowship led Bonhoeffer to America for 10 fateful months in the company of social reformers, Harlem churchmen, and public intellectuals. Energized by the lived faith he had seen, he would now begin to make what he later saw as his definitive "turn from the phraseological to the real". He went home with renewed vocation and took up ministry among Berlin’s downtrodden while trying to find his place in the hoary academic establishment increasingly captive to nationalist fervor.

With the rise of Hitler, however, Bonhoeffer’s journey took yet another turn. The German church was Nazified, along with every other state-sponsored institution. But it was the Nuremberg laws that set Bonhoeffer’s earthly life on an ineluctable path toward destruction. His denunciation of the race statutes as heresy and his insistence on the church’s moral obligation to defend all victims of state violence, regardless of race or religion, alienated him from what would become the Reich church and even some fellow resistors. Soon the 27-year-old pastor was one of the most conspicuous dissidents in Germany. He would carry on subverting the regime and bearing Christian witness, whether in the pastorate he assumed in London, the Pomeranian monastery he established to train dissenting ministers, or in the worldwide ecumenical movement. Increasingly, though, Bonhoeffer would find himself a voice crying in the wilderness, until, finally, he understood that true moral responsibility obliged him to commit treason, for which he would pay with his life.

Charles Marsh brings Bonhoeffer to life in his full complexity for the first time. With a keen understanding of the multifaceted writings, often misunderstood, as well as the imperfect man behind the saintly image, here is a nuanced, exhilarating, and often heartrending portrait that lays bare Bonhoeffer’s flaws and inner torment, as well as the friendships and the faith that sustained and finally redeemed him. Strange Glory is a momentous achievement.

What listeners say about Strange Glory

I thoroughly enjoyed this story of one of the darkest periods in human history. No doubt about it, captivated me from the very beginning. I learned a lot that I didn’t know about Adolf Hitler. Thankful for the people who at least tried their best to stop the madness even at the cost of their own lives.

I have read books about Bonhoeffer previously, but this one is different...some how Marsh makes the man seem more alive, more real than other books have done. Bonhoeffer is more interesting than I had thought. One feels he gets to know a real person, a person he would like to know and a person who has victories and defeats just like we all do. Detailed and personal, the story is very informative but does not sound academic...it is just a well told story of a very talented man from a very exceptional family...a man who in the end showed that what he preached he practiced....by putting his life on the line for the faith he believed in and lived...and by losing his life on earth to the evil Nazi power he struggled against. Along the way much of Bonhoeffer's theology is explained in ways that are understandable and enlightening. This book is a well-told story of an exceptional and interesting man. One of the best biographies I have read lately. The narrator does a very good job....so good that you forget that you are listening to a performance...it is more like a good chat by a skillful speaker.

I took the opportunity of borrowing Strange Glory from a library, and listening to Paul Hecht's reading and switched from one to another, depending on circumstances.

It is one of the most engrossing biographies that I have read in a while, and Mr Hecht certainly brought the text to life in his capacity to read with understanding and sympathy.

Over the past three years I have read Eric Metaxas' retelling, F. Schlingensiepen's version and now Marsh's account and this has been fascinating in itself, but Charles Marsh really conjures up the world, witness and relationships of Bonhoeffer which sing.

Uneven read to a variable book

Would you try another book from Charles Marsh and/or Paul Hecht?

The read was uneven - obvious and frequent edits and redo's that made for a very uneven listen. Also this is a book that requires frequent German - Hecht does an OK job but it isn't an easy read.

Charles Marsh makes some important observations on Bonhoeffer's life, some of it is important. However, his constant nudging that he thinks Bonhoeffer's feeling for Bethge were more than friendship became tiresome. It is speculation at best and at worst feels like a teenager making sexual innuendo remarks at your side as you read. Overall it is a disappointing book which is unsteady in its account.

Not My Favorite Author

I chose this book because I was so captivated by Dietrich Bonhoeffer's Cost of Discipleship as well as his Letters And Papers From Prison. I so admire people who are willing to sacrifice everything for their beliefs. I enjoyed this particular biography despite continuous references to what the author presented as a same-sex attraction on Dietrich's part toward his best friend Eberhard Bethge. I appreciated the in-depth, detailed account of Bonhoeffer's spiritual journey. But honestly, the continuous, repeated, references to what the author claimed was the homosexual angle were just plain obnoxious (enough already!). I was left with the impression that proving this Christian martyr was actually gay (without saying it in so many words) was the actual goal of this author.

Highly recommended. Kept me glued under the headphones. Insightful and nuanced, nice sense of humor too. Kudos also to Paul Hecht!

Encouraging lessons from the life of a faithfully disciple of Christ, to Christians living in the fullness of time. Live each day fully with certain assurance of forgiveness found in the mercies of Christ and the assurance of eternal life.

I really enjoyed this title. It's an interesting departure from other biographies on Bonhoeffer. I highly recommend this text for its original perspective, and beautiful style.