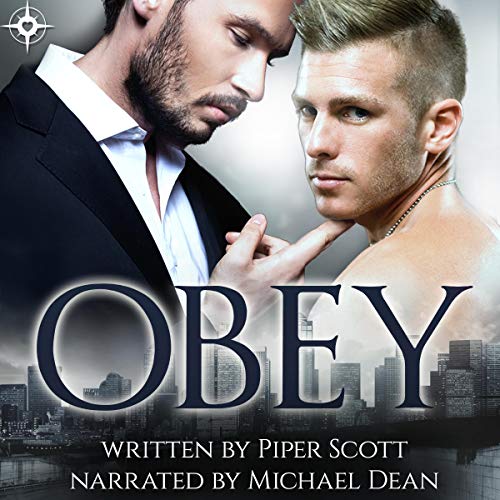 By: Piper Scott
Narrated by: Michael Dean
Try for £0.00

In the dim lights of Aurora’s premier kink club waits an alpha eager to take control. Billionaire Crawford Daniels has bedded submissives before, but he’s never given one his collar. That privilege is reserved for the man who’s strong-willed enough to tell him no, but whose pretty lips always say yes. Crawford wants more than a pet - he wants a partner. Someone to pamper and spoil or punish.

Hidden behind case reports and paperwork waits an omega afraid to give it all up. Owen Ellis has fought tooth and nail to rise above his omega status and find success. He’s educated, successful, and independent, but deep inside, he knows something is missing. A mistake during his teenage years has led to a lifetime of loneliness, and Owen refuses to surrender his heart again. He’s afraid to be hurt.

He’ll never let another alpha in. But some rules are meant to be broken. When Owen meets Crawford and sparks fly, Owen has to decide if happiness is worth the risk. The choice is always his. He can walk away and embrace loneliness - or he can wear Crawford’s collar and obey.

Obey, the first audiobook in His Command series, contains scenes so steamy, your screens will fog; one of the hottest uses for an ice cube ever; an introduction to a club you'll never want to leave, and a happily ever after that proves in the end, love really does win.

What listeners say about Obey

Obey (His Command Book 1) by Piper Scott. This story was well written with a lot of action. The characters will keep you entertained from beginning to end. This was a great listen.
The Narrator Michael Dean did a fantastic job bringing these characters and story to life.

as great as the ebook

The story is always full stars, because if I wouldn't like the story as ebook, I wouldn't listen to the audiobook.

The performance from the narrator is also very important for me. I can't listen to a lot, because my English as a non-native-speaker isn't so perfect to follow a whole story over hours, when the narrator speaks too fast or too sloppy. Normally I have to SEE the person, who is talking to me in English. Michael Pauley is one of the 8 narrators (so far), I can listen without break and have no problems to follow. I'm just not yet finish with the book, but I listen enough to give a review.

A good start to a new series

Okay - but should have mpreg warning

Okay hot story, but the mpreg twist makes me not want to read another. Narration is okay, but sex scenes do tend to be read like sports commentary

Beautiful and well written book about two lovers that were both exactly what the other needed. The book is very emotional but I couldn’t stop listening.

Cannot wait to listen to the next book in the series

What more could you ask for from Piper,.
I read this book about a year ago but decided to listen to it as well.
Wow, so much better in Audio, you ask how this book coukd improve, just listen for yourself.
Great story, but the whole series is great.
A must read if you like Mpreg.

I read this book a little while ago and I had forgotten how amazing the story was. It is sweet, sexy and heartbreaking.

Michael Pauley's narration was once again great, and brought tears to my eyes and made me feel everything Owen and Crawford go through

Great beginning of the series

Can I please give more stars to Michael Pauley for his performance in this book. This is the first book in the His Command series and once I got it on audible I couldn’t stop listening to it.
This is a lovely book set in an omegaverse with an Alpha determined to introduce his lover to the act of submission as an act of trust rather than being forced upon him.
This is a wonderful book, brilliantly written and brought to life. Highly recommend this book.

I’m always a littler nervous going into D/s books but I really like how the Dom handled Himself and his submissive in this one. It was a mix of sexy and sweet. But had it’s cheesy moments, the world building was interesting and it was a nice quick listen

Also, if I hear the words Alpha and Omega again, I'm going to scream. It's really sub/dom but still, over usage of the words in the beginning drove me nuts.

This story has a major twist to how things are in life. Without having to say too much, I found this "reality" hard to digest to the point where I thought it was nuts. But, if you can get pass this, after all it's just fiction, then perhaps this is a good story. Take it for what it is... entertainment.

Michael Pauley is the reason why I gravitated towards this book. And, of course, he doesn't disappoint. Even though I felt the story was lacking in a few ways, Michael was able to totally enhance this book to the point where I was engaged at all times. He is amazing! Narration is perfect!

I did enjoy Crawford's relationship with Owen. Love their chemistry... this is what kept me engaged. I wish this book was at least twice as long for proper development. It left me wanting more.

I knew going into this that I would enjoy the narration because, well it's Michael Pauley, you can't go wrong with him narrating a story. As expected the story was well told and it was easy to determine voices. The story itself is good as well. It's a slightly different take on the omegaverse and the dom/sub universe as well. I have seen some reviews that were disappointed about all the happenings that went on off page but for me that didn't affect my enjoyment of the story at all. This isn't a long book but we get enough of the world building and character building to enjoy the story. At first I was concerned at how quickly Owen turned over his submission but as the relationship grew and I saw more of how Crawford treated him it became very clear that Owen still held the power in the relationship. At no point was Owen's choice taken away from him about anything. In every step that was taken Crawford gave the decision over to Owen. This was a sweet story with little to no angst and a HEA. I'm looking forward to what's next in this series.

The audiobook is narrated by Michael Pauley. A great voice that helps the listener get lost into the story. The personalities of the characters shine through. Great job!

Weird in the Best Way

This is most definitely original and different. Sexy and heartwarming. Will be continuing to the next in the series. Perfectly narrated. Highly recommend!

This was my first read from this author and it won’t be my last. First I want to say I absolutely love Michael Dean. He is one of my favorite narrators. He definitely did not disappoint with his portrayal in this book.

Now I have never really been a fan of MPREG but after this my interest has now been peeked and I have read several of them. What I liked about this book is the story itself. There was such a struggle for Owen. He fought so hard to forget his past. Crawford is all he needed to do that. Their chemistry and the ways Crawford knew to take care of him and give him what he needed were beautiful. The struggles and the loneliness were heart wrenching but in the end you could feel the love these two men had for each other.

Thank you for such a great read. I look forward to reading the next book in the series.

Obey is an excellent start to a fantastic series! Michael Pauley's narration is as wonderful as always.

Good for a fap, forgettable though after a week.

The first scene takes about 50% of the book to get to but was worth it for the wait. Lots of build up and tension that eventually made the scene just super juicy.

I really loved this story. I love that Owen has to think about what he truly wants deep down and that sometimes having a choice means letting someone else take charge. There are other matters that come up as well where choices have to be made and there is power just in being able to make those choices.

I listened to the audio version which was well done and enjoyable.

The beginning of a great series

I previously read this but the audio version is so much more. Owen had all my empathy and more. Crawford saw something very special in Owen and nurtured him and helped him to complete healing.I enjoyed their journey and look forward to continuing this amazing series in audio, because it rocked in ebook version. High expectations fulfilled. The narrator did a great job bringing it to life.