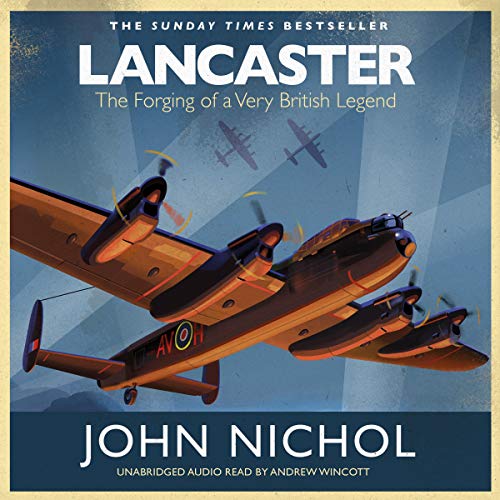 By: John Nichol
Narrated by: Andrew Wincott
Try for £0.00

From John Nichol, the Sunday Times best-selling author of Spitfire, comes a passionate and profoundly moving tribute to the Lancaster bomber, its heroic crews and the men and women who kept her airborne during the country's greatest hour of need.

The Avro Lancaster is an aviation icon; revered, romanticised, loved. Without her, and the bravery of those who flew her, the freedom we enjoy today would not exist.

Sir Arthur Harris, the controversial Chief of Royal Air Force Bomber Command, described the Lancaster as his 'shining sword' and the 'greatest single factor in winning the war'. RAF bomber squadrons carried out offensive operations from the first day of the Second World War until the very last, more than five and a half years later. They flew nearly 300,000 sorties and dropped around a million tons of explosives, as well as life-saving supplies. More than 10,000 of their aircraft never returned. Of the 7,377 Lancasters built during the conflict, more than half were lost to enemy action or training accidents.

The human cost was staggering. Of the 125,000 men who served in Bomber Command, more than 55,000 were killed and another 8,400 were wounded. Some 10,000 survived being shot down only to become prisoners of war. In simple, brutal terms, Harris' aircrew had only a 40 per cent chance of surviving the war unscathed.

"The epic story of an iconic aircraft and the breathtaking courage of those who flew her." (Andy McNab, best-selling author of Bravo Two Zero)

What listeners say about Lancaster

The reader spoilt this book for me. It's a good story about an interesting plane, but at times the voice was very over-dramatic, relishing the drama, fear and horror of the crews in a parody of a Hammer Horror movie. Nor did I like the accents the reader put on. None of this was necessary, and I felt at times like saying "just read the damn book!"

Not enough about the actual aircraft

I was expecting more about the design, development and technical aspects of the Lancaster. This ubiquitous habit of narrators reading anecdotes (and selected proper nouns) in the accent they believe appropriate becomes more irritating with every chapter. Why apply accents to audio books, we don't apply them when we read?

A lovely book with some wonderful stories and detail. So very sad that the narration very nearly stopped me listening. There was absolutely no need to use accents and voice tones. Basically spoilt a good book.

John Nichol has clearly done a lot of research and the stories are compelling. I found listening to it rather difficult because Andrew Wincott (Adam from The Archers) was just trying too hard. Not all actors are good readers. Nevertheless a nuanced insight into the reality of life for bomber crews in WW2 and, to a lesser degree, the lives and deaths of their victims.

Many RAF bomber crew have been reticent about recounting their experiences. Lots just wanted to get on with their lives after they had made it through alive. The attrition rate of bomber crew was shocking, as much as 30% on some raids. So many of the survivors found that compartmentalising that part of their lives was the only way to move on, as the weight of the loss of friends and comrades was too much. John Nichol was also a RAF navigator who was shot down over Iraq and tortured by his captors. What is clear right away from Nichol's book is that WW2 survivors are far more prepared to candid and honest with a man who has 'been there too' than another author. The stories of the men who fought and the women who loved and supported them sometimes brought tears to my eyes. Nichol should be congratulated for also included the previously overlooked contribution of black RAF flight crew in his book. Their contribution has of the 500 West Indian flight crew had been 'whitewashed' out of history and popular culture. I found the story of Guyanese RAF navigator Cy Grant particularly interesting. Shot down on his third mission Grant after evading capture finally ended up in the POW camps where the wooden horse and the Great Escape took place. Thoroughly recommended!

This book was probably one of the best books I have listened to. This was as good as being sat with the crews, family and friends.I never lost track, it wasn’t full of crap about rivets, and technical shit. Nor was it full of political spin. It was the crews, Friends and family’s.

Stick with your first reaction to the audio sample

Bearing in mind the subject matter I hoped I would be able to get past the narration, which I knew from the sample I was not keen on. However as time went by the narration became more and more intrusive (if not annoying), and I eventually gave up and returned the book. In my opinion the style of reading was not right for the nature of the book, and even if it had been I don't think this particular narrator is one for me, in any style. Maybe the way the book is read here is aimed at a wider audience, seeking something more entertaining than enlightening, a theory which might be borne out by the use of actor who will be familiar to many potential buyers. Perhaps that also explains the use of sound effects to recreate the sound of speech over an intercom. I can't in good conscience comment on the content of the book itself - the narration constantly pulled me out from the narrative, so I really didn't get to the core of it.

The best audiobook I've had so far!

Another outstanding book. The content was top notch. The only complaint is for the person reading the book. Whilst it was generally OK there were a lot of mouth noises which was at points quite distracting from the content.

Some reviews here complain but this is very well done. I have all the aviation related audiobooks and this story and narration is top shelf.