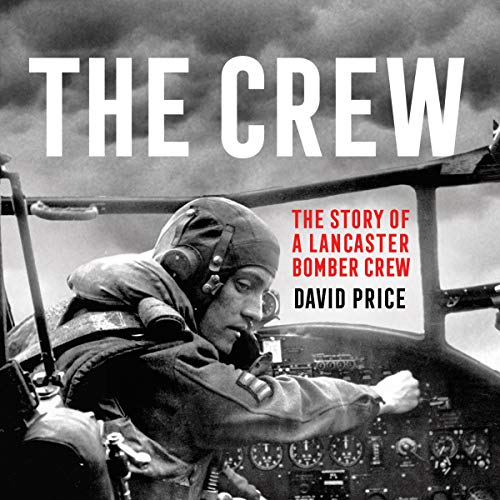 By: David Price
Narrated by: Peter McGovern
Try for £0.00

The Crew recounts the intimate, personal testimonies of Wing Commander Ken Cook, who served as Bomb Aimer with the Comans crew. The audiobook specifically follows Flying Officer Jim Comans and his crewmen from their enlistment as volunteers, through training and into operational service. The Comans crew flew 45 hazardous bombing missions - mostly deep into Germany at night - through the winter of 1943 to the summer of 1944.

At 95, Ken Cook is the crew's last survivor. Enlisting in the RAF Bomber Command at 19, his extraordinary story brings a moving insight into the bombing campaign. His experiences, particularly during the Battle of Berlin, highlight the extreme danger each bomber crew faced. With Bomber Command's casualty rate of over 44 percent, the book describes how the airmen overcame immense physical and mental challenges to survive. There are now very few surviving RAF Bomber Command airmen from the Second World War. The Crew will be one of the final eyewitness testimonies to a momentous time in our history.

What listeners say about The Crew

Oh dear, David Price, Zeppelins filled with flammable Helium? It’s bad enough to confuse Hydrogen with Helium but then to assert that Helium is flammable? It does rather make me want to treat every other fact in the book as “unproven” - if this schoolboy howler can get through what else did? I just can’t understand how between the author, the editor, the proof reader and even the narrator, someone didn’t say “just a minute, this isn’t right”. Anyway, I enjoyed the book, but think it safest to regard it as a fictionalised account.

Not as good as it could be

As far as it goes, and within the bounds it sets itself - the story of a “typical bomber crew” this is quite a good story. However, on occasion the author strays into the wider sphere of bomber politics but makes no attempt to assess the contribution made by the bombing campaigns to shortening the war. In addition the narrator’s consistent mispronunciations and hi ability to emphasise the wrong syllables spoil the overall experience. I’m future I will be looking for him and avoiding books her narrates.

Struggling to finish this if I'm honest.
Read by someone with limited appreciation of the effect of punctuation on delivery.
Someone who has no personal knowledge of the subject judging by the often strange pronunciation of certain words.

I read (listened) to this book on the back of the excellent 'Masters of the air' describing the American experience of the bombing war. This book would have been done justice had it been read by a narrator of the same calibre as that of 'Masters of the air'. It felt as though I was being read to by a teacher educating a nursery school class or to someone who does't speak English as their first language. Apart from that, I found the book hugely educational and learned much about the airmen of Bomber Cmds experiences compared to their their American counterparts. A very good book marred by poor narration which is probably best digested by reading rather than listening.

Rather dull to be honest.

Seems to be very little original research in this book - just a rehash of other well known sources. Some glaring factual inaccuracies (assuming that the Zepplins were filled with helium and it was explosive!). The narration is not ideal - poor pronunciations and strange gaps in sentences.

To my friend Alfie,Tail End Charlie 41 to 46

Men who were not recognised for their bravery, for the cost they paid in the dark cold nights over Europe.
To them no cheers, no accolades, no history of the brave acts but just cruel condemnation of actions they were not privy to the planning of. They carried out the duty and many died killed over enemy territory or drowned in the North Sea without a grave their families could grieve at. The lucky ones came home and lived with the memories of their comrades who they shared those missions. This book brings these days back to those brave men who fought hours with a short life expectancy. These men forged friendships, fought and died, they went further than many fighting force did. This book reveals the story of these men and their bravery that this country only honoured long after many had passed away. The use of one crew through the process of becoming a bomber crew this book is a wonderful piece of work that exposes these men as the quitevheros we can be proud of. So well written and narrated.

An interesting story but not containing much “new” information on the subject. I did expect to have the lives and contribution of each of the crew but only three were discussed in any detail. Although I sampled the book before purchase I was concerned that the narrator was poor and this proved to be the case. Pronunciation and modulation of voice proved to be a distraction and spoiled the listening experience. I stuck with it to the end but will definitely avoid any further books read by this narrator.

A typical publication following the life of a single crew of a Lancaster Bomber during the 1942-45 period; however, in difference to other books of a similar kind, this also includes a smattering of well known facts about bomber aircraft (mostly Avro Lancaster) of the RAF, ad also details of raids not undertaken by the crew selected. Other references of well noted individuals associated with the Lancaster story are also contained. The book is nonetheless well presented by Peter McGovern and the story will be enjoyed no doubt by many; there are however books corresponding to Bomber crews from RAF, Commonwealth and the USAAF that have considerably more content and specificity. Please do not be put off by the above; the majority of the book is worth listening to.

The only downside was the very disappointing narration.

not quite what it says on the tin.

The actual amount of time spent with the operational crew is very low. Most of the book seems to be a history lesson about the war and pre-war period. I was quite disappointed in both the book and the narration which was fairly monotone and didnt at any point assist in giving the story any presence.

Tries to Cover Too Much

This book covers a most interesting topic, in describing pilot Ken Cook's experiences as a part of the Avro Lancaster crew that served as bombers between 1942 to the end of the war. But unfortunately the author tries to cram too much information into the book, going back to before WWII aviation history to the bombing runs of WWII, and back again. And there are other stories sprinkled in from ordinary citizens. That is all fine, it just makes it confusing and hard to follow. But overall, the book is very good and the narrator is excellent.

There are some interesting personal stories recounted, but the author does not give much context for the training of the crew ('other' air crew spent as many weeks in training as pilots) never mentioning the Commonwealth Air Training Program, though recounting a specific US training program. The narrator has some challenges with proper-name pronunciation and acronyms; air crew fly with the "raaf" (as opposed to the R-A-A-F, or Royal Australian Air Force).

Leo McKinstry's 'Lancaster: The Second World War's Greatest Bomber' does a better job recounting the air crew roles and the huge challenge faced by crews attempting to bail out (far worse survival than the Halifax).