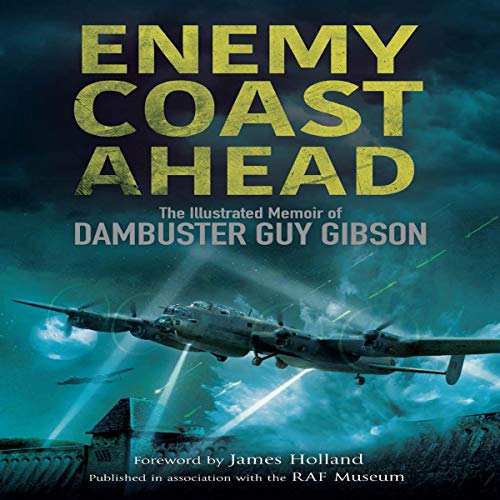 A definitive new edition of a classic memoir, published in association with the RAF Museum, complete with notes from leading historians.

Guy Gibson was the leader of the famous Dambusters raid and Enemy Coast Ahead is a vivid, honest account, widely regarded as one of the best books on World War II. It is also an insider's account that sets down in clear, honest detail the challenges that the RAF faced in the war against Germany's Luftwaffe.

Tragically, Gibson died in September 1944, when his Mosquito crashed near Steenbergen in the Netherlands. He was aged just 26. This new book has been published to mark the 75th anniversary of his death and includes an introduction by James Holland, a historian and broadcaster, and notes by Dr. Robert Owen, the Official Historian of the No. 617 Squadron Association.

What listeners say about Enemy Coast Ahead

Interesting to hear Guy Gibson's own words, but probably the worst choice of narrator I've ever heard. Not just doesn't sound right, he mispronounces too many terms. A shame, because the narration destroys the book.

This is a wonderful and interesting book writen by a special man.

I've the read book many times and it's a real page turner.

...but where on earth did they get the narrator from? He sounds like he's reading from a book in a school english class and he's only doing so because the teacher forced him to.

He's not so much boring as bored, can't be bothered, wishes he could be somewhere else.

Please someone, re-record this with a narrator that can be bothered - the book deserves better

Written by a hero who soon too to give his life

A poignant read. Written by a young leader who within a year was to give his own life. No review could ever do this book, this author, justice. Highly recommended

Good story, which sheds some light on the true Guy Gibson. This audio book for me is let down by the dull monotone narrator. if you have trouble sleeping or struggle to hear lower tones, this book is not for you.

an excellent book written by one of my childhood heroes but absolutely ruined by the choice of narrator. if ever a book needed to be recorded it's this one.

Excellent Story, not so the narrator

A really great story poorly told , difficult to listen to as voice level is inconsistent .

A great story about a great mission carried out by the most famous RAF squadron in the world. A battle against not only the enemy but adversity.

great look into wartime history with a man that never saw victory. Well narrated and understated

As a young lad in the 50s I read this book and was enthralled by the story. With this in mind I was really looking forward to listening to this, but was disappointed. Where Guy Gibson was ebullient and decisive the narrator sounds as if he is reading the book because he has to rather than because he wants to. His delivery is very poor and disinterested, and this, together with some fairly dodgy editing, completely spoilt the experience of listening to this book. Definitely not up to the standard I expect from Audible.

Gibson’s account of air fighting in WW2 is authentic and fascinating, especially his account of the preparation and execution of the Dams raid.

Unfortunately it is rather let down by the monotonous delivery of the reader who didn’t even bother to learn to pronounce the names of the targets correctly. If ever there is a new recording of Winnie the Pooh, he would make a great voice for Eeyore!

That said, the book is well worth getting for the content alone!

I was wrong! This is actually a really good story!

Having just finished OPERATION CHASTISE, by Max Hastings, where he lauds ENEMY COAST AHEAD, I was worried that I missed something in this book in my earlier review, which found this book lacking excitement. I'm re-listening to it now and really enjoying it. Not sure what was distracting me on my first listen but now I realize that Gibson provides an engaging month by month, hands-on view of how Britain's bomber war changed over the course of the war. There's a ton to learn here and Gibson's dry sense of humor comes through in places.

So, here is a revised review...
The book provides some interesting perspective from a pilot who was there at the time. Guy Gibson is, of course, more than just a pilot, he was the celebrated leader of the 617 squadron, the Dam Busters. Quick thoughts...
- I didn't realize that Gibson spent time flying night fighters. That was an interesting part of this book.
- Good perspective on early war bomber command
- Gibson's first hand account of the dams raid was quite good, and the way he opened the book with the approach to that raid was really well written (given that opening, it seemed to me that he was a really good writer. It was fascinating that, because this book was written during the war and the bouncing bomb was a military secret, Gibson never actually mentions that the bombs skipped along the water when dropped. James Holland's recent book on the dams raid provides a lot more detail and overall excitement about that raid.
- Perhaps one of the weakest parts of this presentation was the narration. I really appreciate the time that narrators put into doing their work for us and this one seemed engaged and professional. The problem was that his speaking style is almost monotonous. It was easy, therefore, for my mind to wander.
- Gibson ends with the dams raid but doesn't cover his career thereafter (He was killed on a mission a year or so afterward)

BTW, OPERATION CHASTISE provides some different perspective on Gibson. He was a hero but, as many are, a flawed one. I'd recommend listening to the two books sequentially (order doesn't really matter).