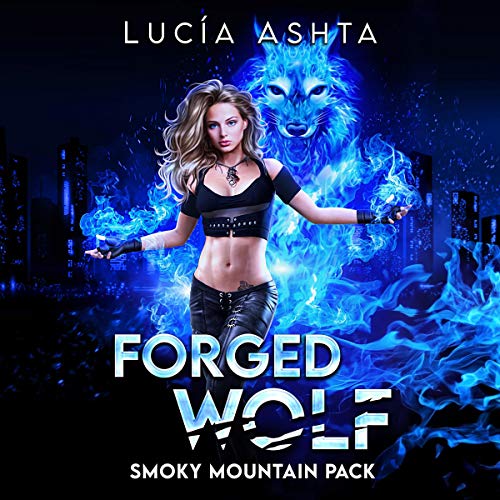 By: Lucia Ashta
Narrated by: Kate Marcin
Try for £0.00

Zasha comes from a family of cage fighters. There was no time for playing with dolls or painting her nails - just learning how to survive in the ring.

When four men attack her, she’s ready for them.

Until they break the rules...and use dark magic against her.

They transform her into a wolf. A beast. Violating her very nature.

The Pound is an underground fighting arena, where wolves are pitted against each other to delight the whims of the perverse elite.

It’s where wolves are sent to fight - and to die.

The ring is where she thrives.

What listeners say about Forged Wolf

I have to admit I wasn’t sure about this series. I love the author and her magical creatures academy series so I thought it was worth a read and see if I enjoyed it and it’s safe to say this series was amazing. It’s a hard series i to stop listening to once you start. This book was the perfect way to introduce a new series I love the fiery Zasha a fight that loses her father only to be taken and changed. Abused by dark magic that’s supposed to kill her if she doesn’t die first in the pound she’s taken to she fights with everything she has against those who have taken her and doesn’t give up. An amazing series definitely recommend listening too.

Narration made the story progression bearable

jesus I thought I could die before something happened... 🐌-paced story progression to the point that I wanted to scream.
I did a lot of skipping on absolutely unnecessary dragged-on monologues, especially when you could tell from a mile where they would lead you...
The story is good, I'll let the next installment be narrated to me but I do hope there won't be that many snail-paced parts... as if only this way the requested no. of words could be reached...

The narration has saved the day & the boo. Had I not had the narration, I'd not have it read beyond the first third of the book.

Great book. I listen to it while i was at work. i wish it would of finished in a better place.

that was abrupt even for a cliffhanger, it felt like the second half of the last chapter got forgotten.