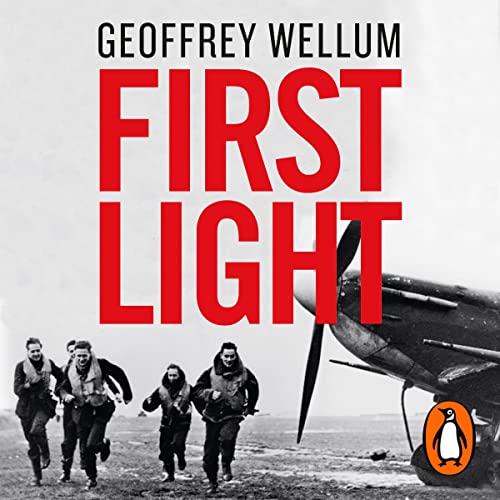 By: Geoffrey Wellum
Narrated by: Andrew Brooke
Try for £0.00

Two months before the outbreak of the Second World War, 18-year-old Geoffrey Wellum becomes a fighter pilot with the RAF.

Desperate to get in the air, he makes it through basic training to become the youngest Spitfire pilot in the prestigious 92 Squadron. Thrust into combat almost immediately, Wellum finds himself flying several sorties a day, caught up in terrifying dogfights with German Me 109s.

Over the coming months he and his fellow pilots play a crucial role in the Battle of Britain. But of the friends that take to the air alongside Wellum, many never return.

What listeners say about First Light

I felt at times I was actually in the aircraft with Flight Leftenant Geoffrey Wellam DFC. A marvelous account of what it took to be a frontline fighter pilot. God bless you Geoffrey, and all of your mates, those who died in battle, and those who so sadly died protecting our country.
We all owe an immense debt of gratitude to you, and ALL the fighter pilots that protected our island, and indeed the many other countries and islands that relied on young brave men like yourself. I would dearly like to meet you, and. shake your hand Sir. You and your brave heroic friends are what kept the Great in Great Britain. I sincerely hope you are with us and enjoying a calm and peaceful life with your family and friends.
God bless you Geoffrey Wellam RAF DFC.

An excellent narration of a story that i could not stop listening to. I don't tend to bother with audiobook reviews but not to make the effort after listening to this superb story just seemed wrong. I recommend to anyone.

Un-put-downable. The narration is particularly good and goes very well with the evocative style of the author.

This book should be required reading in schools !

A remarkable tale of a young man who by the age of 22 years has had a lifetime's experience of war, war in the air. He relates his innermost thoughts as he progresses,and survives,whilst close friends are killed in the fight for survival of these Islands against the Nazi war machine.
I am a retired airline pilot who has flown over almost everywhere he has mentioned,flown in the same beautiful skies, as he had,but without the fear of flak or fighters. However,being an aviation buff I knew the skies in which I flew were where the previous generations pilots had fought for us,and often looked down and pondered what happened in World War 2.
Those of us alive in the UK today owe such a debt to men like Geoffrey Wellum.An awesome read.

What a fascinating book.

I read this book when I first joined the RAF and found it very interesting, now 13yrs later having been on Ops a number of times I find it truly inspiring. I have had the honour of meeting Geoffrey Wellum on a couple of occasions and found him to be a truly humble man.

Have just re listened to this. What a marvellous chap. The questions he asks are as important as his memories. We are a poorer nation for his generation passing. If you liked this try "That Summer" by Andrew Grieg.

Excellent book that works very well in audio. Very moving at times with some harrowing events well told. What a hero, incredibly humble and everything you’d expect from of the few. Highly recommended.

Fantastic account of what these young men endured, from training to the front line, great listen, highly recommended

I found this just excellent. It was very well written and read. At times it felt like being in the cockpit. It brought home what those very brave young pilots went through. Recommended.

Highly recommended, one of the best raf / Battle of Britain books. Great narration added to this also.

Forget the over dramatized history Channel rubbish this is a straight and calm description of an astonishing young man in a tensely real moment in modern history.
Our self obsessed emoticon existances are really something of an embarrasment when compared to a voluntarily enlisted 19yr old fighter pilot in 1940.
Without a hint of hyperbole or self-ingratiation, this is a hellish adventure well told.

The best aviation book I have ever read

Excellent narration and written extremely well. The perfect amount of nerd stuff for pilots and history buffs but still an easy listen, and it's even about Spitfires. 10/10

So much more than a book about a fighter pilot

I lowered the speed so I wouldn't miss a word. It was much less bravado and much more human

I love memoirs in all wars, have listened to hundreds, this is right up there with the best.