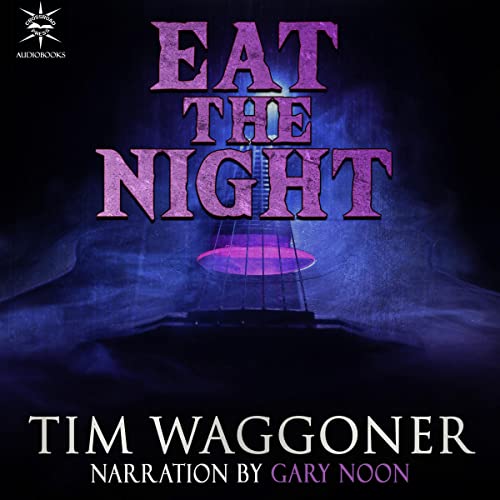 For Joan Lantz, it starts with a dream of a death cult’s mass suicide in the jungle of Suriname 30 years ago, followed by the discovery of a hidden basement in her new house, where heavy metal music echoes on humid tropical air.

For Kevin Benecke, long-suffering employee of a mysterious organization known simply as Maintenance, it starts with the violent death of his coworker at the hands of a madman who tells him, "The Big Dark is coming for you."

Long-dead cult leader and former rock star Mark Maegarr has returned from beyond the grave, and Joan and Kevin have front row seats to his apocalyptic comeback. Maegarr’s waited decades to finish what he started, and this time no one will stop him from putting on a killer show designed to hasten the universe’s end.

What listeners say about Eat the Night

I enjoyed this one. Not my favorite by Tim Waggoner but definitely worth a listen.

_Eat the Night_ reminds me of an 80s horror movie I'd rent on VHS repeatedly. It's got cultists, a mysterious cosmic horror, rock bands, gratuitous sexual content, and some blue collar workers trying to keep hell under wraps. The characters are fun, the antagonists are completely bizarre, and the tone is never too serious or precious. You'll enjoy the ride...if you like this type of ride.

The narration and production were both very good, though I did take one star away from Performance due to the squashed, overly bright audio production. The mic technique and processing did Gary Noon dirty, but you can still enjoy his very on-the-nose performance.

This book was provided to me free in exchange for an honest, unbiased review.