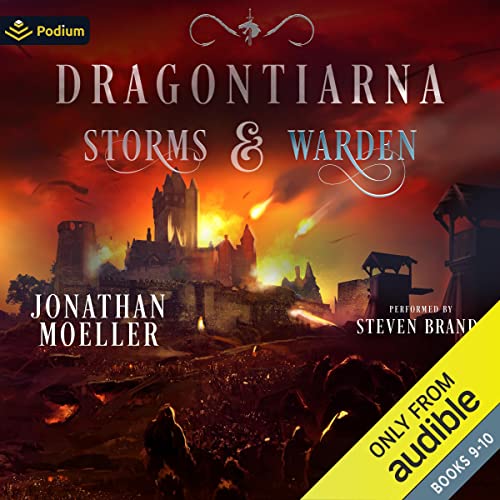 By: Jonathan Moeller
Narrated by: Steven Brand
Try for £0.00

Contains books nine and ten of the Dragontiarna series.

War grips two worlds as heroes rise to challenge the sinister Heralds of Ruin. In the realm of Andomhaim, Ridmark Arban leads the armies of the High King against the brutal legions of the Heptarchy. A daring ruse might defeat the might of Warlord Agravhask, or it will bring Andomhaim crashing down in ruin.

In the Empire, the armies of the reunified Empire move to challenge the sinister necromancers of the Order of Blood. But Tyrcamber Rigamond has battled the Master of the necromancers before, and he fears a deadly unseen trap. For behind the Heptarchy and the Order of Blood are the Heralds of Ruin, and they will burn worlds at the command of the Warden of Urd Morlemoch.

The tide of war engulfs two worlds. Ridmark has liberated Cintarra from the dark legions of the Heptarchy. But the Heralds of Ruin now march upon Cathair Kaldran, which holds a source of unimaginable power.

And if the Heralds claim that power, countless worlds will burn to ashes. To defeat them, Ridmark must take up a weapon that might consume him. Once again he must wield the Sword of the Dragon Knight.

This is a wonderful series of book. Very gripping and i now want to read the rest of the books around this exciting and magical realm

I think they are the frostborn seris

Excellent conclusion to a gripping story. Very sad that it has ended. So enjoyable to listen to. Brilliant narration by Steven Brand who brings stories to life.

One of the best series I've read to DATE!! Sad to see it end.

I am soooooooooooo disappointed! He was my favorite writer, but this was so horrible that I will NEVER listen to anything he does again. Yes! It’s that bad.

I got 5 friends to start listening to him. I am so embarrassed. I am going to tell them not to bother with this book or Mr. Moeller anymore.

He thought of the worst, most annoying, creepy new characters that could possibly be conceived. I couldn’t make it through the book. I gave up after the 3rd chapter, but I was really rooting for him so I skipped to the end. It was just horrible. Honestly, I wish I could have given negative stars. I would have.

Don’t waste your point. This is very poorly done.


another great book in the series, like the previous ones this one does have what I would describe as "censored adult content" but I will leave it to the listener to decide on that point.

loved it. a very good story will listen to it again I'm sure. want more

The epitome of adventure! Ridmark, Calliande and Third make a great team! I loved the integration of the many different beings and their abilities. The addition of multiple worlds made things much more interesting as well! An absolute must read!

Great series with an excellent ending. Would recommend this series to anyone. It was a great listen

Loved this story, the performance, and how it took me into a completely different world. Almost like I was there myself.

built up great characters and storyline through this 5th pair of stories. loved all the other books as well. naration is so important as well and i will definitely be looking into more Steven Brand.

Great book. A bit complicated requires some attention or the story gets away but in all good series