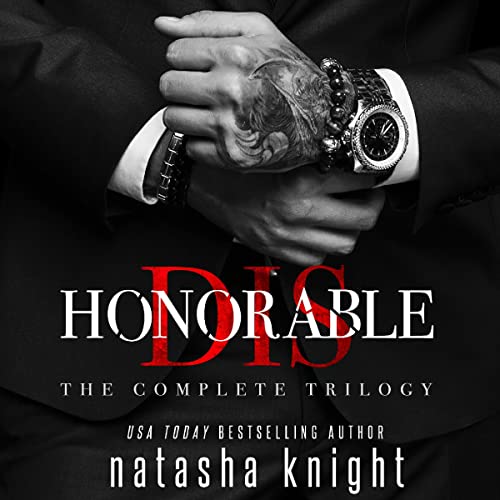 This set contains Dishonorable, Corruptible, and Unhinged, the complete stories of all three Amado Brothers!

I didn’t know Raphael Amado when he turned up on our doorstep demanding restitution for an old debt. My grandfather knew him well, though, and he quickly conceded. That restitution? Me.

Six months later, Raphael came to claim me. He took me from my home, taking me to his Tuscan estate, where from the crumbling chapel to the destroyed vineyard to that dark cellar, the past stalked him like a shadow. Even the walls held secrets here, and I’d need to uncover them all to survive.

Because taking me was only the beginning of his plan.

Sofia was the sacrifice to pay for her grandfather’s sins. She accused me of being the devil. And she’s right. But the truth was, he betrayed her.

And when the time came to promise to love, cherish, and obey, she spoke the words that would seal her fate.
I do.

We have a common enemy, though, my bride and I. But even the devil protects what’s his. And she’s mine. She just doesn’t yet know how much protecting she needs.

When I disappeared out of Lina Guardia’s life years ago, it was for her own good. Now our paths cross again. But things are different.

She’s got secrets. Dangerous ones.

She thinks she can keep me out of her world, but she's in over her head and needs a protector. I just have to remember I can’t be more than that to her. I can’t give in to the temptation.

Because in six months, I'll be a priest. And she complicates things.

Author’s note: Corruptible was originally published with the title Disgraced.

But he’s back. Risen, like Lazarus, from the dead.

And he thinks I betrayed him.

The way he looks at me should terrify me, but I’m drawn to him. I always have been. Even now. Even though I know if I’m not careful, his obsession will destroy us both.

I should have died that night two years ago. My mistake cost my men their lives. It should have cost me mine.

But I survived. And the day I learned Eve did too, I made it my mission to find her.

I sought her out. Found her living her new life.

I’ve been inside her house. Eaten her food. I’ve stood beside her bed and watched her sleep.

She has so many secrets, and I know one of them. It’s the one where our pasts collide. The one that destroyed me. And it’s the reason I’ve come for her.

What listeners say about Dishonorable: The Complete Trilogy

Loved the first book and completely finished it, the second book I got bored with and skipped to the end to see what happened, never made it past the third chapter of the third book. Not worth the credit imho

Excellent story of 3 brothers who fall in love but that love is hard for them to accept, I loved this 3 book narration it was well told and the story was gripping.

🌻The plots get better each book!🌻

The first thing I want to address is the review that refers to the Heroines being raped, that is not true. In none of the books do the Heroines get raped by the Heroes. As the matter of fact, in book one and book three the Male lead asks the the Female lead if they are sure they want to proceed. With that being said, I was stunned that in a book set in a modern setting, there is no safe sex discussion between the main characters and use of condoms are only mentioned in book three, and that is only used to prevent pregnancy not STDs. Yes, I know this is fictional but, some parts of reality should always be considered.

In all three books, the Hero is emotionally scarred and suffers from some type of PTSD. There is also a common theme of revenge, including some scenes of brutal violence. Book one also includes flashbacks of child and spousal abuse.

Book one and three both start with the Hero/antihero intending to harm the Heroine. In neither book are these intentions truly carried out.

In all three books, there are D/s type relationships, if this offends you, skip this series.

All three books end abruptly after the major conflict is resolved, the conclusions are written as short epilogues; which is a disappointment. Overall, however, the three book collection is worth a credit but really would not be worth three credits, if the books were offered separately.

I did not like the female narrator at all. She can’t do an acceptable man’s voice and her inflection is non existent. The man narrator wasn’t much better.

I liked the 1st 2 books but the 3rd one wasn't great. I didn't really like the narrators voice in the 3rd one. Eve's voice grated on my nerves. Zach was way too volatile.

What kind of person would forgive a man that drugged her?

Awful on every level

The narrator is ridiculous and overly emotive with stupid things. The first story Sophia is an immature, inexperienced child and every sexual encounter feels gross and abusive. Were she a 35 year woman, that would not be the case. I didn't get to books two or three because this was just garbage without even a true romance in the background or a minimally sexy narrative.

The first book was a good listen. The second book was trash The third book was confusing

First and third book the narrator was awful, ruined the book. DNF either one, with made the second book harder to enjoy. Second book the male narrator’s female voice was just….I can’t even (awful) - he should be embarrassed. He has a bass voice and used a falsetto voice for females. But I did finish that one and it was better than the 1st and 3rd.

The writing also didn’t seem as good as Ms. Knight’s usual style. I couldn’t put my finger on the differences, but it was almost like a ghost writer did this book.

Overall, just not credit-worthy. 2/5 would not recommend.

only made it a fue chapters in. couldnt bring myself to finsh it. dont recommend

I can’t believe these books were written by a woman. When someone says no it means no. I have not read or heard such filthy rape scenes in my opinion. The stories are okay but I found myself skipping more than half of the books because of the filthy language and every man just continuing after clear and sometimes loud messages to stop!

The second book of Damien and Lena was also good but it was very hard to listen to the narration and get through the book. The male narrator had the worse female voice and honestly I cringed when he would voice those parts.

The last book of Zach and Eve was really great and kept me on my toes all the way until the end when all the answers were revealed.

Natasha Knight is just a great author and I love her books and it was surely worth the credit.