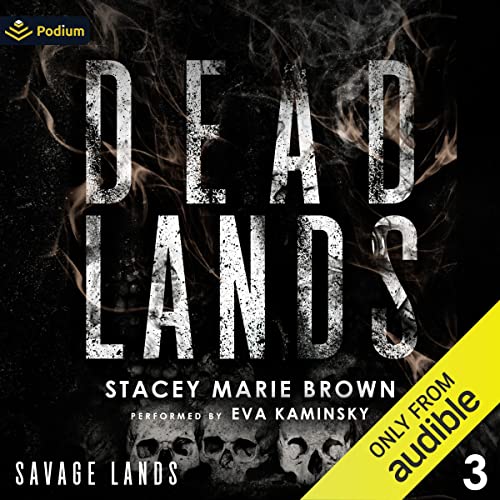 By: Stacey Marie Brown
Narrated by: Eva Kaminsky
Try for £0.00

Kidnapped by the notorious rebel group Provstat, Brexley finds her connection goes deeper than she ever imagined.

Reunited with old acquaintances and an uncle she never knew, Brexley is thrown into the vicious world of politics, where human and fae leaders will do anything to come out on top. Here dangerous associations and meticulous plots are far more dangerous and cutthroat than any game she survived in Halálház.

If her life wasn’t complicated enough, her relationship with the infamous legend is growing stronger. The more she tries to untangle the link between Warwick and her, the thicker it wraps around them both, entwining them in a world between life and death, where brutal passion and fury collide. When whispers of a coveted magical substance called "the nectar" start buzzing louder, Brexley’s strange bond to the fae book leads her on an unexpected journey that brings her closer to the answers she seeks.

But once she opens the door, all the secrets and lies of her past come flooding out, including truths she’s not ready to face...and betrayals that cut bone deep.

What listeners say about Dead Lands

Undoubtedly the worst book I’ve listened to this year. Do not waste your money or a credit on this garbage.

Bile rising, lids fluttering, same things over and over. Maybe to reach the word count without having to come up with actual content?
After book 1, I was invested enough to move on to book 2… Now it feels more like trudging through mud just to try to get to the end to see what happens.

I have a bone to pick with this book. 70% of the book I was in love couldn't get enough. Needed more and more. Then once I got to the 70% mark Brexley was driving me crazy. The constant back and forth was nuts. But man what a ride. She was driving me crazy so would go on and on about how she didn't need anyone to help her etc etc etc but then got herself in trouble and would call out to Warwick for help and he would have to save her ass. It was annoying. Warwick was everything I needed and more 🤤🤤🤤🤤🤤. Half the damn book my eyes were rollin in the back of my head cuz God damn Stacey Marie brown did good at writing this character. Im bowing down... on my knees for this. So if that sounds like a good time. Hang on because your about to go through the ringer of emotions but damn what a fuckin ride.

Here. We. Go!! All that delicious slow burn sexual tension has been leading to this.

Other than the up in 🌶️ action, we also got more action action, and engaging plot progression. Our characters are moving amongst each other now, and things are heating up on all fronts.

And after that cliffhanger, I just had to go ahead and listen to the first chapter in the next book…it wasn’t *quite* time for bed, yet!

Is she a badass or scared?

When not in an actual fight Brexly is all cool and confidence. Boeing she can take on the world.
She survived the crazy prison, right?

But in EVERY real life fight she’s scared, can’t move, heart in throat.

Unfortunately the narration makes it worse. Every sentence ending with an up-tone. Making it sound like a question. Also, the narrator makes her sound constantly scared and breathless (except when she is playfighting and is strong and cool)

I’ll get the next books on kindle. Perhaps without the “scared little girl” narration it’s better?
It’s also cheaper and despite it all I want to know what happens.

Absolutely loved book 3 of this series. The narrator has done a great job at bringing the characters to life, and the story was by far my favorite!

The story line is okay but....

The story line could be great but, the writer continues to go over certain thoughts of the main character like a dead horse. Yes the book would be shorter but it would be better. I of course love the sex in this book but..I do listen for the stories too, so ...it is worth the listen if, and only if you can stand the redundant inner dialogue that is repetitive. Overall I like it and am curious where the writer is going with the story so will continue throughuntil.the finale.

OMG!!! There is so much that happens in this book. Brexley has been through so much and the hits just keep coming. This author knows how to keep you engaged and wanting more from the story. I flew through this book in less than 24 hours. I will definitely be going straight to book 4.

I’m committed to the story because I really enjoyed book 1. But Brexley’s reactions are the same- it’s becoming respective. Hope it gets better with the next book.

The first book was good, but OMG now it's gotten soooo good! I'm hooked & don't have time for a long review lol 🤣 I'm diving into the next book! But I just wanted to say, I most definitely recommend checking this one out!

Brexley is completely badass, unfortunately the story line has started to slow. it took to the end of the book to have another meaningful plot twist. I love how the book of Magic is now speaking to her at random and she was able to get an idea where the nectar is, I just wish we had gotten there sooner. I would like to see Killian again. I think he added tension that was needed.. maybe if Brexley was taken hostage again it would have given more spark. Eva Kaminsky is one of my fave female narrators..she does a 5⭐ job of all the roles. the chemistry Stacey Marie Brown sparks on the page with all of the characters has earned her a spot in my top ten steam queens