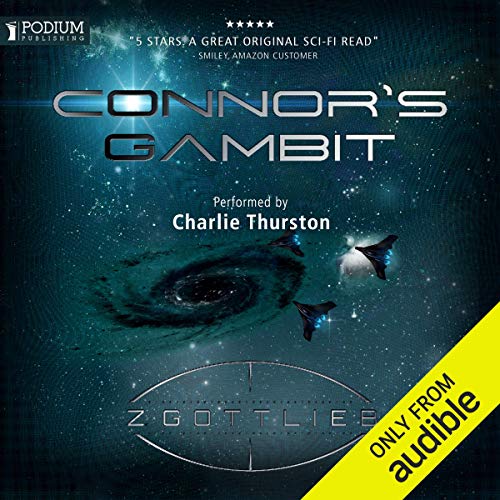 By: Z Gottlieb
Narrated by: Charlie Thurston
Try for £0.00

Brad Johnson is the lone witness to a UFO sighting. The sighting, while odd in itself, is not the only incident that occurs that evening. The incident is followed up with the alien targeting him and his family.

The firefight with the alien destroys everything Brad thought he knew about his family and pulls him into an intergalactic battle between two space faring aliens. Brad quickly finds himself leaving Earth struggling to understand his role with the aliens on both sides of the conflict. One group threatens Earth's security, the other group wants something from him.

All Brad wants to do is to survive and return home to his family, but not until he embarks on the greatest adventure of his life.

What listeners say about Connor's Gambit

Aliens, Neslins and Brad, Oh My!

Connor's Gambit by Z. Gottlieb is the first book I've received to review that's in audible format, so this is quite a new experience for me, just like it's the lead character Brad Johnson's first adventure with aliens. And what a trip this is!

After Brad sees an alien spaceship and it seems no one else did, he begins to doubt his sanity. But when his suspicions are confirmed and his wife, Shinny, reveals who and what she really is, his life not only changes forever, but so does everything he thought he knew about his life and the universe which surrounds him -- aliens do exist -- he should know, he's married to one! And, boy, does the plot thicken after that.

In Z. Gottlieb's fun world there were times that the space technology seemed so realistic I was wondering if the author had some sort of NASA experience. From alien creature descriptions, their lifestyles and their amazing high-tech technology, to Brad's awakening and newfound belief in UFOs, and his acceptance to jump right in and help, whilst learning on the job; this book has a lot to offer any self-respecting science fiction fan and space cadet!

A few of my favourite things? There's so many to choose from. I loved Brad (obviously!). Then there's the scary Neslins, the Aneplè, the battle cruiser Zuonopy and all its features and Brad and Shinny's son, Dane with his talking dragon Yeshawliq. I need a talking dragon, can you make one out of a 3D printer for me please?

The narrator's voice was different to what I expected at first, however, Charlie Thurston pulled me into the action and kept me hooked right through to the satisfying end, which is slightly left open for more, whilst at the same time it's also a fully completed standalone story with major plot threads all tied up nicely. I'm so pleased to have discovered Z. Gottleib's space world and I cannot wait to read or even listen to the next instalment. I'm sure it will definitely be worth the wait!

Z. Gottlieb has captured the essence of space travel, alien life and the rules of their universe spectacularly. I really enjoy my time (all 13 hours of it) listening to this space opera, and the fact that I was listening (instead of reading) really made me feel like I was there, thrown in deep with the characters and their stories, part of their crew!

Great fun from start to finish.

Connor’ Gambit was a ton of fun listening to from start to finish. I’ll be honest, having never read a scifi book beforehand, Connor’s Gambit may have made me a convert. I really can hardly wait for Z Gottlieb’s sequel. The book had a few unexpected twists and while I soon knew that the book’s title would have an important part by the end of the book, I couldn’t guess the ending. So to sum it up — ‘black hole’, a ‘lucky blanket’, ‘intuition’, and an ‘AI dragon’ basically sums everything up. Great family friendly read, that spares us from blood and violence. Very highly recommend.

I would buy a sequel if there is one.

All the characters keep saying "at this time" and it was kind of weird and distracting.

Aside from that, the story is ok. It's definitely written for a young audience and the characters and situations feel flat. Still it was entertaining enough and I got through the whole thing but the author has a long way to go before she can compete with the likes of LeGuin or Czerneda.

I enjoyed the overall story idea and even the character ideas. Everyone sounded to much alike throughout the story, especially the aliens. Everyone is always trying to talk to every possible interpretation of what they are saying and often points are brought up by characters that are inconsistent with the events going on.

While in the middle of a military situation who is going to be talking long-term strategy concerning the personal needs of their assistant? Some physical descriptions of things seem to change through the story also.

Now this is a great book!

I loved the story and the narrator brought the characters to life. I can’t wait for more from the author and narrator.