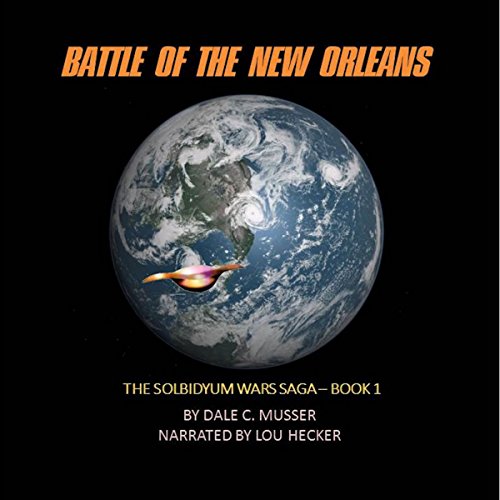 Battle of the New Orleans

Thibodaux James Renwalt, or Tibby as he was called by his friends, was just your typical Earthman. Recently discharged from his service in the United Stated Navy and working as an engineer for the city of New Orleans, maintaining the pumps that kept the city dry. Tibby decides to spend some time at a fishing hole in the swamp shown to him by his grandfather when he was a small boy. His trip turns out to be more than he expects when he discovers an ancient alien spaceship buried in the mud of the swamp. After entering the craft, Tibby accidentally engages an autopilot causing the ship to take off with him aboard, navigating through space to its preset destination. What follows are adventures beyond Tibby's wildest dreams, as the ship contains a cargo of the rarest and most valuable substance in the universe, Solbidyum. Tibby arrives in the Federation space and is greeted by a large Star Ship with thousands of people aboard. He soon discovers he is about to become the richest man in the universe, but not without considerable enemies trying to capture both him and the Solbidyum cargo. Tibby finds himself thrust into a role of hero and falls in love with a beautiful woman, but soon finds that some of his decisions result in the loss of thousands of lives.

What listeners say about Battle of the New Orleans

What made the experience of listening to Battle of the New Orleans the most enjoyable?

The narration was good. As was the story. Not the best I have ever read, but still pretty good. The whole alien abduction thing isn't original, but the author managed to twist it into pretty unique story. I wouldn't think it would be up for a galaxy award, but I still eagerly look forward to the next installment. I am hoping that Mr. Musser can keep the momentum going, and not peter out a book or two into the series.

Have you listened to any of Lou Hecker’s other performances before? How does this one compare?

Nope, But I would after hearing this one.

Yes, But it would be a spoiler, so I will decline to say.

Hard sf. reminded me of the sci-fi from decades ago.

I thoroughly enjoyed this story and the characters in it. The book hooked me and reeled me in!!!

Would you consider the audio edition of Battle of the New Orleans to be better than the print version?

Due to a Stroke - reading books is no longer possible. Thank goodness for audiobooks

I enjoy how problems are resolved.

I really enjoy Mr. Hecker's performance as he brings each character to life.

I hope there will be more audiobooks in the near future in this series...

Pass on Athis one

I did not think much of this book. There were no surprises. I knew how the book would end before the of the fourth chapter. This story is full of unimaginative cliches. No one in book has an ounce of intelligence or common sense except the story's hero. The worst of which was the line, "...some of my best friends are black". The narrator's performance was just sad. As a southerner, it was painful to listen to his version of a southern accent.