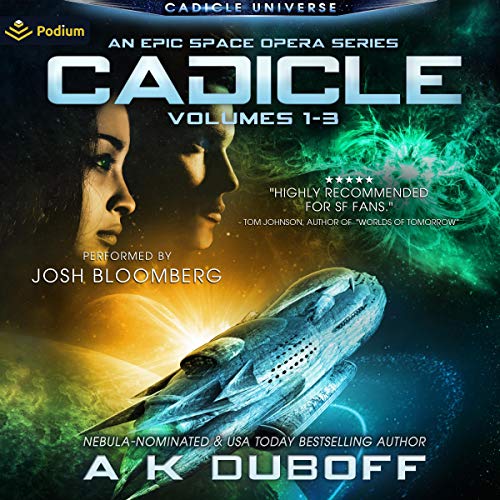 By: Amy DuBoff
Narrated by: Josh Bloomberg
Try for £0.00

A character-driven space opera with adventure, intrigue, and romance for fans of Dune, Ender's Game, and Star Wars!

When Cris Sietinen leaves Tararia as a teenager to learn more about his prohibited telekinetic abilities, he thinks he's started a new life. Years later, he learns that freedom was always an illusion--he and his family are at the center of an elaborate galactic conspiracy orchestrated by the governing Priesthood.

Genetic engineering, political manipulation, and preordained destinies converge when Cris and his son Wil learn of a secret interdimensional war against the mysterious Bakzen. But the real enemy may be far closer to home. With knowledge of the Priesthood's hidden agenda and its disastrous political ramifications for the Taran empire, Cris and Wil embark on a mission to save their civilization from certain destruction.

This collection includes the first three volumes of the Cadicle series.

ARCHITECTS OF DESTINY
Cris Sietinen was born with rare telekinetic gifts--abilities outlawed by the governing Priesthood. A new future awaits when Cris receives an invitation to join the TSS and begin their sanctioned telekinesis training program. Except, following that path puts him at the center of a generations-old galactic conspiracy.

VEIL OF REALITY
The greatest deceptions are never suspected. After twenty years with the TSS, Cris Sietinen is in the unprecedented position of being both Lead Agent and heir to a High Dynasty. When his son is captured by the mysterious alien Bakzen, Cris uncovers a hidden truth that forces him to question all that he once took for granted.

BONDS OF RESOLVE
A year after his encounter with the Bakzen, Wil is still grappling with his upcoming role in the war. However, Wil finds unexpected support when he befriends a new TSS trainee from Earth, Saera. Through their budding relationship, Wil comes to terms with the purpose he was born to fulfill and gains comfort in the knowledge that he won't have to face the future alone.

What listeners say about Cadicle

I enjoyed it. Great character development, good storyline with some interesting locations.

Looking forward to see what our hero does. Especially liked the idea of a shared bond between true loves. The next book could be really good also.

Takes inspiration from Dune, but far from inspired

I think it was written for a younger audience in mind. But if it were a little more mature and didn't read like a Teen-mag fan-fic about the new hot boy in class.

Would you ever listen to anything by Amy DuBoff again?

Not likely, and I again, I feel that it was meant for a younger audience.

What does Josh Bloomberg bring to the story that you wouldn’t experience if you just read the book?

Um.. the words. There is no way that I would have read this. I am at work and nothing else to listen to... sure, I will listen this awkward collection of teen angst

Oh, a lot of disappointment.

If you are over 14 DO NOT TOUCH

This is obviously geared towards young adults. That, in and of itself does not mean that it is a bad book...but this was a bad book.

After clearing chapter 8, it was obvious that this was a pretty shallow, predictable poorly executed tale.

My fault for not researching farther, but this seems to be written for a child. Conflicts are resolved in unrealistically simple ways. No depth to character development. Author seems to have no concept of a fight. Narrator seems to have trouble reading.

Not a space opera, should classified young adult

This is not a space opera at least not in the same class as say John Campbell. Other than being written in the future where space travel is possible it's not even science fiction. Character development is limited to describing young teens with huge amounts of self doubt.

Clearly written as three smaller novels the pasted together the plot is simple the story line jobs across time every time the author gets stuck on how to move the story forward.

I really tried to finish, but couldn't...

What would have made Cadicle better?

Stop the angst and introspection. At first I thought it was just the reader projecting so much indecision and angst. In the end, I realized it was partly the reader but mostly the author.

What was most disappointing about Amy DuBoff’s story?

It's meant for teen to pre-teen, but marketed otherwise.

Every voice seems like they are worried about everything. "Do you want butter on your pancakes?" is delivered as if someone is offering to cut off an appendage.

If you could play editor, what scene or scenes would you have cut from Cadicle?

At least 50% of the volume. I listened to it at 2.5x speed and was still bored silly by swaths of negative introspection that went nowhere.

The characters are all babies. Grow up the entire lot of them, even the old folks. People, and I would hope even more so people in the future, are not this frail, fragile, and full of self doubt.

Every topic builds to a climax that never, not even once, happens.

Problem:
X has been taken by a race that is superior to us in every way (vaguely described how and why) and is in a secure facility that we have never, not once in hundreds of years, even got close to.

Resolution:
"Ok, I'm his dad so I'll go get him with zero planning, one ship, and no idea of how I will get back. Oh, they ended up being sixth-grade stupid and have a lot of infighting. I retrieved him from the other side of the galaxy and got out all within 48 hours using using broken technology with the massively superior enemy actually knowing I'm coming and having already set a trap."

It's surreal to explain. "We got him, he so stressed at having been away from mommy and daddy for just over 24 hours. We have to really baby him and treat him like an infant in a diaper." Did I mention that this s the most powerful person ever to have live that we are talking about?

It took two volumes to lead up to the main character even existing. After all that wait you'd really want to slap the dude in the face as a wake-up call. There is nothing likable, respectable, or even vaguely interesting about him.

Ok, now I'm upset I even made it through two volumes...

god this is boring. 6 hrs in and I had to give up. awfully boring.

I have the books on Kindle. I know have the Cadicle series. NOW I am waiting on what happens. Hurry Amy I need my mind-space-crack!

This story is easy to follow and opens your mind to possibilities. Also if anyone knows the "Ringing moon" Theory will love how she uses it!

5 hours in and I still don't have anything but a very shallow idea what the characters look like; how the world of the book is structured politically, socially, etc. Interesting ideas are presented and then...dropped. We are told just about everything instead of being shown anything. The first five hours are basically the conversations with oneself or others between action. There have been no action sequences yet, or any tension building. We know there's a big secret but the characters don't have any way to show us how they start becoming suspicious- well, except the narrator says they are suspicious. The main character starts off 16 years old but reads like a younger boy. 20 years later, he still acts and thinks like a young boy.

If a good editor had really pushed the writer for a substantial re-write, this could have been a great story. It's a great idea. Just not executed fully.

Story is pretty juvenile and horribly predictable. Might be a good read for pre-teens except for the foul language.