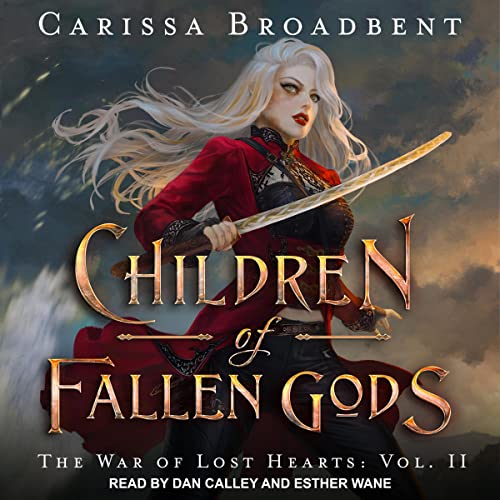 By: Carissa Broadbent
Narrated by: Dan Calley,Esther Wane
Try for £0.00

Tisaanah bargained away her own freedom to save those she left behind in slavery. Now, bound by her blood pact, she must fight the Orders' war—and Max is determined to protect her at all costs.

But when a betrayal tears apart Ara, Max and Tisaanah are pushed into an even bloodier conflict. Tisaanah must gamble with Reshaye's power to claim an impossible victory. And Max, forced into leadership, must confront everything he hoped to forget: his past, and his own mysterious magic.

All the while, darker forces loom—far darker, even, than the Orders' secrets.

As Tisaanah and Max are ensnared in a web of ancient magic and twisted secrets, one question remains: what are they willing to sacrifice for victory? For power? For love?

What listeners say about Children of Fallen Gods

Absolutely obsessed with this series! The plot and world building is unlike anything I’ve seen within the fantasy genre. Writing rivals even Sarah J. Maas herself. With as good as the book is it’s disappointing that the voice actor for Max made the book hard to listen to. I have to skip over his chapters and just read them. His breathing within the takes are so loud. Keep this in mind before you get it!

I'm sorry... wtf did I just read?! I mean, it was amazing, but... I refuse. Nope. No. The answer is no. Thank god the last book is out because 😳
This was a brilliant story that will summon literally every emotion in your person to the surface and sometimes... it will beat you with it. I adore this story! These characters, this world, and oh my holy fjeudhdidb I can't BELIEVE where we ended up 😱 LETS GO! Maybe I'm too far towards the darker side of morally grey, but I say... BURN IT ALL ✊

The story, as in the first book, is wonderful. One cannot help but root for the MCs. This series is sadly underrated!! The male narrator, however, bothers me.

I wish someone would tell the male narrator that breathing with his lips around the microphone doesn’t sound as good as he thinks it does. Thank god for the female narrator. The story is excellent though.

This series is amazing and the narrators are too. I’m absolutely OBSESSED! The vast world she created with so much rich detail, and depth is singularly impressive. The characters that feel so real, with not a bit rushed or dragged, you feel deeply connected to their plight and their fight! It is a damn masterpiece start to finish, and yes, I’m starting book 3 at midnight on a Monday because I CANNOT PUT THIS DOWN!!!

This book had me feeling all the feelings!!! It was amazing and everyone should read it!

Love the twist. And narrators are great! I can’t wait to listen to the next one.

Cant get over Max narrator

The story line is great and wasn’t sure where things were going. Loved the different povs and the twists. Too much near death experience to have emotional connect to those parts. It was hard to listen to the Narrative of Max due to the same time for everything and the loud breaths. Made me feel like every moment when it was read was chaotic idk just not my cup of tea but loved the story over all

I have come to like this series a lot but too many near death experiences become anti-climatic and predictable. I’m about to begin the third in this series and I hope some thing change.

In to the final book!! Wow! This series just keeps getting better. Highly recommend to everyone.